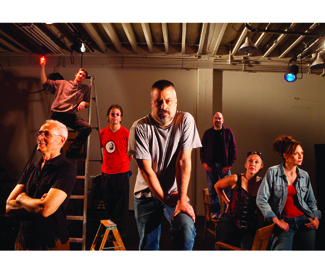 GOLDIES Choreographer, impresario, and arts advocate Joe Landini likes to say yes. “It’s my philosophy to start that way,” the founder and artistic director of the Garage — San Francisco’s most hoppin’ performance venue — explains. “If you say no to something, the conversation is closed. There is nowhere to go.”

Landini is a curious mixture between visionary idealist and pragmatist who has a solid grasp of what it takes to get a job done. As a young jazz dancer, he was told to take ballet to improve his alignment. So he did, until his knees gave out and he switched to modern dance at UC Irvine, where he majored in choreography.

While Landini was in college, master choreographer Donald McKayle suggested that he had talents as an administrator. Landini accepted the observation though he saw himself primarily as a choreographer. He moved back to San Francisco — he grew up in Concord — and waited tables while interning for Mary Alice Fry’s Footloose Dance Company and Shotwell Studios. “I learned to write grants,” he remembers over coffee, near the Garage’s digs at 715 Bryant. “And I got free rehearsal space for my own choreography.” He also learned that per capita, San Francisco funds its dancers reasonably well. “In New York, you might have 200 applicants for one grant. Here, there may be 50 to 60.”

Opening the Garage in 2007 (its original location was on Howard Street) allowed him to offer what he thought artists, particularly young ones, need: an environment where experimentation, learning, and risk-taking are welcome. Artistic failure doesn’t bother Landini; it’s part of the learning process, he says. During the first five years, he estimated that annually around 10,000 people walked through that iconic red door on Howard.

Landini’s major initiative, RAW (Resident Artists’ Workshop), is modeled after AIRspace (AIR standing for “artists in residence”) — which had been set up for queer performers at the Jon Sims Center for the Arts. Landini ran it for a year. When the Sims Center closed, he bought the seats and tech equipment, putting them in storage until needed.

The Garage is run like a time-share in which 30 groups evenly divide up the time slots. While primarily a haven for dancers, theater folks and performance artists are equally welcome. Anybody can apply. True to form, Landini doesn’t tell them no, though “they just may have to wait until a space opens up.”

Wayne Hazzard, executive director of Dancers’ Group, the Bay Area’s dance service organization, considers the Garage a “powerful space where community-building can start. Joe, with his practically 24-hour open-door policy and constant presence, is almost like a neighborhood mom-and-pop store. For first-time young artists, this is particularly valuable.”

All Garage artists get three months of four-hours-a-week rehearsal time that ends with a public performance. Artists can come back — and many do. As for his own choreography, Landini is just getting back into it. During a two-year stint in London for an MA in choreography from the Laban Centre, he immersed himself in the European dance theater tradition. “I learned so much, and I have never been able to use it,” he says — until now: on November 27, he will present his new physical theater piece, Bitter Queen.

As if running the Garage seven days a week was not enough, Landini also started a Summer Performance Festival this year, curated in conjunction with ODC Theater. Again, he couldn’t say no — this time to offering a select group of Garage choreographers a venue more professional than his own modest theater can provide. The event will return in August 2013.

And, of course, Landini couldn’t say no when he heard that the city was interested in keeping another summer event, the 22-year-old West Wave Dance Festival, alive. “Every city needs a yearly independent dance festival, right?” he asks. One guess who will be running it in 2013.