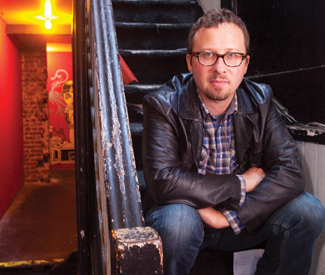 GOLDIES He may be a filmmaker, but the inspiration for Jamie Meltzer’s first feature-length documentary came while he was flipping through the bins at a record store.

“I found this song-poem compilation,” Meltzer remembers. At the time, he was a San Francisco State University MFA student. “It was such an amazing, undiscovered-to-me subculture that I started making the film that day. It took me two years to go around and meet all of these song poets and musicians, but it really started in the record store.”

The end result morphed from thesis film into 2003’s Off the Charts: The Song-Poem Story, which aired on PBS and earned a cult following. It also opened professional doors for Meltzer; after thanking one of his undergrad professors in the film’s credits, he learned that his alma matter, Vassar College, was hiring in its film department. In 2007, he transitioned to his current teaching gig, at Stanford’s prestigious MFA program in Documentary Film and Video.

“I was happy to come back to San Francisco, of course, but I was also really happy to step into the documentary-centric environment at Stanford,” Meltzer says. “It’s almost like a documentary lab — between the students and other professors, we’re all thinking about documentary films, talking about them, studying them, making them.”

His follow-up to Off the Charts, 2007’s Welcome to Nollywood, takes on another “Who knew?” subject: Nigeria’s vibrant film industry.

“Nollywood is the third-largest film industry in the world, and they have this independent film model that makes a lot more sense than even what we have in the US. That just kind of blew my mind,” Meltzer says.

“But beyond just being a portrait of an industry, the film ended up being a complex story. There’s all sorts of questions of, are these quote-unquote good films, or is the value that they’re being made and consumed as kind of a self-representation? To me, Nollywood and Off the Charts were similar in that way: different people passionately making art, but not sure how well it will be received. The character of the dreamer against all odds, that outsized ambition — I think that’s a big parallel with independent filmmaking in general. You always believe in what you’re doing, but you’re not really expecting other people to believe in what you’re doing.”

Meltzer’s current film, Informant, premiered at the 2012 San Francisco International Film Festival, and has since been on a nonstop festival tour. The doc explores the strange life of Brandon Darby, a lefty activist turned FBI informant who helped send two 2008 Republican National Convention protestors to jail. He’s a polarizing guy, but the film, which is anchored by an extensive interview with Darby, invites the audience to draw their own conclusions. Complexity is once again an important theme.

“The main thing was to try to respect the complexity of Brandon, as a subject, as a person, because he has all these different facets,” Meltzer says. “His story’s very intense, and he was very sincere and conflicted in ways that I found really compelling. It brought up a lot of interesting moral territory and all these moral issues. Then you’d go and talk to Brandon’s activist nemesis, and he had a totally different take, and you’d find yourself agreeing with his story. So, to have that kind of character who can be seen from such different perspectives — that’s totally astounding. I really wanted to get that across in the film.”

“Some audiences have this idea that documentaries have to make very clear and usually politically-based arguments. And that’s the thing that I set out not to do. I think it’s great that the film creates a dialogue over, ‘What is documentary?’ People question my point of view, they question the point of view of Brandon and the other characters,” he says. “Hopefully they will start questioning other documentaries, too, and the notion of objectivity. Documentary filmmakers know that documentaries aren’t objective in the least. But I think audiences still aren’t entirely clear on that.”

Meltzer credits both the Bay Area filmmaking community (particularly Frazer Bradshaw, Informant‘s director of photography) and his Stanford colleagues (including numerous former students) for helping him make the film. “San Francisco has a lot of people who are committed to working on things that they believe in for little or no money, out of passion. That can’t be overstated,” he says.

So what’s next? Making Informant was so difficult, Meltzer confesses, that he thought it would be his last film. But then he heard about a group of exonerated men in Texas who’ve formed a detective agency to help other innocent people behind bars. “You can’t pass up those kind of ideas,” the filmmaker says. “You have to grab them when they come.”

No doubt it won’t end up being a simple story — but Meltzer will weave all of its threads into a captivating tale.