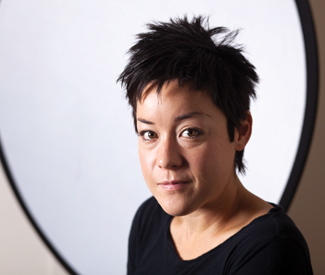 GOLDIES One of the very first things you’ll notice about Anna Ishida, onstage and off, is an aura of self-possession that simultaneously grounds her and yet sets her ever-so-subtly apart in a crowd. But she also has a chameleon-like quality, a way of blending seamlessly into her surroundings, whether it’s a 49-seat black box theater on Natoma Street, or the hip buzz of Farley’s East in Oakland, where we meet over coffee and sandwiches.

Professionally, Ishida appeared first in The Color of Justice at Oakland’s TheatreFIRST in 2002, following up with roles with a miscellany of companies such as Woman’s Will and the San Francisco Shakespeare Festival, plus a long association with Shotgun Players. But this year, after a powerful performance as Tamora, Queen of the Goths, in Impact Theatre’s Titus Andronicus, Ishida’s been working to make herself even better-known as a triple threat: vocalist, actor, and independent film star. Her turn as Yitzhak in Boxcar’s summer production of Hedwig framed her trademark spiky hairdo in black leather and heartbreak, and matched her versatile vocals and formidable stage presence to the dozen glam-rock divas cast in the title role.

Her current show, Christopher Chen’s The Hundred Flowers Project with Crowded Fire Theater, casts her as an actor exploring the sprawling epic of China’s Cultural Revolution via the creative process. Earlier this year, she spent a week basically locked up in a room for 16 hours a day for her cinematic debut in HP Mendoza’s unsettling art house ode to the horror film genre, I Am a Ghost. The film — about a literal lost soul trapped in an unending routine — premiered at the 2012 San Francisco International Asian American Film Festival, and has been getting raves elsewhere on the festival circuit.

Ishida was born in Tokyo; her family moved to the East Bay when she was four, where she first attended a mostly all-black kindergarten followed by an almost all-white Catholic school, which naturally meant she fit into neither. Gravitating towards music at a young age, she narrowly escaped becoming a business major in college and instead attended the Pacific Conservatory of the Performing Arts in Southern California, where she connected on a deeper level to acting, and has mostly stuck with it ever since.

Onstage, no matter what the role, Ishida never lets her focus flag, and her signature watchfulness gives her characters a feral, almost predatory depth. Perhaps most interestingly, in a climate of casting controversies particularly affecting Asian actors (such as a recent production of The Nightingale at La Jolla Playhouse, where a Caucasian actor played the Emperor of China), Ishida has successfully avoided being categorized by her racial makeup. With the exceptions of The Forest War and The Hundred Flowers Project, she’s been seen in roles she has successfully rendered colorblind.

“I’ve demanded that people see me as an actor, rather than as ‘Asian’ — and if I didn’t work, then so be it, but I was not going to be pigeonholed,” she emphasizes.

Then she laughs, considering some of her recent roles: a Russian tsaritsa, Poseidon (in Shotgun’s The Salt Plays, Part Two: Of the Earth), and Tamora. “I may have escaped being typecast as Asian,” she allows, “but now I’m typecast as the angry queen. The angry god-queen!”