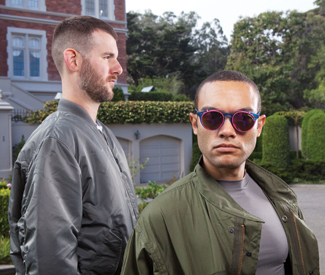 GOLDIES Nymphs of the Internet forest, rejoice. The multidirectional musical entity known as 5kinandbone5 (www.5kinandbone5.com) is here to soundtrack your perverse festivals with the latest sonic plug ‘n plays. “Fearless psychic shaman” production duo Matrixxman (Charlie McCloud) and Earthman (Paavo Steinkamp) have been behind many of the year’s most exciting electronic dance music developments, transmitting digital wizardry and analog obsession from a virtual basement laboratory/development platform/ecstasy zone embedded in the cybersphere.

“We forged a pact at a rave once way back in high school in Virginia,” Matrixxman told me over email. “We promised to be friends forever and make the most futuristic shit known to mankind.”

That futuristic shit-pact has yielded a pixellated spectrum of tracks ranging from swaggy rap to acid house flashbacks, on a roster of labels including Fool’s Gold, UTTU, Grizzly, and Unknown to the Unknown. Collaborators include the cream of the alternate Internet: Mykki Blanco, Riff Raff, Sinden, Le1f, Kid Sister, Babe Rainbow. Just as striking is the duo’s breathtaking Tumblr-squared visual and media aesthetic, which takes their love of MS Paint graphics, download glitches, anime porn, antiquated Unicode, and anonymous trollspeak to gnarly heights. (“I don’t care for Bay music artists,” Matrxxman said gently, “because they mostly really and truly suck but I dig Sly and the Family Stone if I had to say.” Later he posted on Facebook, “x-files sexual fantasy roleplay mood.”) Their shit is on Angelfire.

The optimal keys to 5kinandbone5′ success have been versatility and unpredictability. In 2012, the fruitful marriage of hip-hop and dub techno continued to demolish the boundaries between “pop” and “underground,” generating a trippy aural world of minimal flourishes, big bass atmospherics, and heady experiments. 5kinandbone5 had come up in the East Coast’s hardcore drum and bass scenes and revered hip-hop producers like Timbaland and the Neptunes — but also connected deeply to early Detroit techno, ’90s house, psy-trance, UK bass, grime, and gamer and vogue beats. With that deep knowledge and willingness to cross genre (and sexual, racial, and regional) boundaries in pursuit of something unearthly yet deliciously perverse, they were perfectly positioned to vault trendy sounds like trap and dubstep toward more unique dance floor environments.

So far the 5kinandbone5 vision quest has produced at least one masterpiece, “Wut” by the New York raper Le1f. The track — a 3-D aural aquarium swimming with infectious horn loops, staccato bass bumps, crowd-chant samples, and hyperreal, unabashedly gay lyrics — blew away critics and, with the help of its entrancing video, quickly went viral and invaded clubs last summer. True to 5kinandbone5 form, the whole production was done through the magic of the Internet. Le1f didn’t physically meet the producers of his hit until the second time he performed it in San Francisco.

“The Internet is cool,” Matrixxman said of the collab. “It allows people to scope out each others’ vibes and stuff. It allows for the sending of nude photos to remote locations. In some cases, it facilitates collaborative efforts in music and art.”

As for the artistic process itself, Matrixxman weighs in on how he generates inspiration: “Usually incense or candles are lit initially. An ambiance is created. Auras are projected and a distinct presence is asserted. Prior to actually making any music, I like to visualize myself styling on hoes viciously, and that tends to become a self-fulfilling prophecy of sorts.”

5kinandbone5 recently launched its own label, Soo Wavey, with local DJ Vin Sol, that concentrates on more house-oriented releases. And Matrixxman recently released a jack-jam with another local DJ, Robert Jeffrey, called “Penis Power,” that’s been burning things up. As for the future of 5kinandbones and everything?

“The future/paradise as I see it would be a post-corporeal society in which we live freely as data and can inhabit disposable cyborg bodies at will. Gender and class will not be of any concern and we’ll be traveling the far reaches of the galaxy in search of other intelligent life. Artificial intelligence will have emerged and present some interesting paradigm shifts. Cybersex will be utterly amazing and enter a new evolutionary era in how we touch each other as humans.”

Probably there’ll be pixies, and music, too.