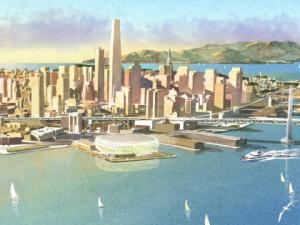 UPDATED The proposal to let the Golden State Warriors build a new sports arena complex at Piers 30-32 is moving forward quickly, with the Board of Supervisors Budget and Finance Committee considering approving its fiscal feasibility tomorrow (Wed/14), the Land Use Committee hearing its design and transportation aspects on Monday, and the full board scheduled to move it forward on Tuesday, two days before Thanksgiving. After that, it will undergo an environmental study and work on myriad fiscal and administrative details, coming back to the board for final approval, probably in the fall, with the goal of opening by the 2017 basketball season.

[UPDATE 11/14: The Finance Committee today voted 3-0 to approve findings of fiscal feasibility for the project after Sup. Jane Kim made amendments delaying the EIR scoping session until January and ensuring the Citizens Advisory Committee will be given more time to review the project and its term sheet. City officials and the Warriors also signed a deal this morning requiring that at least 25 percent of its construction jobs and half of its apprenticeship positions go to local residents or military veterans. We’ll have more details and analysis of what happened in the coming days.]

Critics of the project say it is being rammed through too quickly, with too little public notice or attention to blocking off views of the bay, and on terms that are too costly to city taxpayers. To some, Lee’s quest for a “legacy project” is reminiscent of the groupthink boosterism that characterized the initial America’s Cup proposal, before it was revealed to really be a lucrative waterfront real estate scheme that was great for developers but costly to the public, and later abandoned.

And just like last time, when the Guardian, then-Sup. Chris Daly, Budget Analyst Harvey Rose, and others forced a major scaling back of the developers’ ambitions, there are some prominent voices of caution now being raised about the Warriors arena deal and its potential to fleece city taxpayers, including concerns raised by someone with decades of experience shepherding some of San Francisco’s biggest public works projects.

Rudy Nothenberg, who served as city administrator and other level fiscal advisory roles to six SF mayors and currently serves as president of the city’s Bond Oversight Committee, yesterday wrote a letter to the Board of Supervisors urging it to reject the deal.

Among other things, he criticized the 13 percent interest that city taxpayers would pay on the $120 million in pier restoration work that the Warriors will do. “Quite simply, I would have been ashamed of such a recommendation,” Nothenberg wrote. “In today’s markets it is incomprehensible to have such a stunning recommendation brought to your honorable Board in such haste.”

Project spokesperson PJ Johnston and its main advocate City Hall, Office of Economic and Workforce Development head Jennifer Matz, each disputed Nothenberg’s characterization, citing a report by the project consultants, the Berkeley-based Economic and Planning Systems Inc. (EPS), that 13 percent is a “reasonable and appropriate market based return.”

Matz told us the rate was based on the risky nature of rebuilding the piers, for which the Warriors are responsible for any cost overruns. And she compared the project to the massive redevelopment projects now underway on Treasure Island and Hunters Point, from which the city is guaranteeing powerful developer Lennar returns on investment of 18.5 percent and 20 percent respectively.

Johnston, who was press secretary to former Mayor Willie Brown and worked with Nothenberg on building AT&T Park and other projects, told us “ I have great respect for Rudy.” But then he went on to criticize him for taking a self-interested stand to defend the views from the condo he owns nearby: “They don’t want anything built in their neighborhood. They would rather leave it a dilapidated parking lot.”

But Nothenberg told us his stand is consistent with the work he did throughout his public service career in trying to keep the waterfront open and accessible to the public, rather than blocking those views with a 14-story stadium and surrounding commercial and hotel complex.

“I have a self-interest as a San Franciscan, and after 20 years of doing the right thing, I don’t want to see this rushed through in an arrogant way that would have been unthinkable even a year ago,” Nothenberg told us. “I spent 20 years of my life trying to deal with waterfront issues.”

Among those also sounding the alarm about how quickly this project is moving is land use attorney Sue Hestor and former Mayor Art Agnos, who told us the supervisors should heed the input of Nothenberg and make sure this is a good deal for the city.

Agnos said, “Rudy Nothenberg stands apart from every other department head and CAO in the modern history of San Francisco for his financial and managerial expertise in bringing major projects with complex finances to completion that worked for our City. That is why the past six mayors…whether conservative or liberal…trusted him to advise them and administer the biggest projects in this city from Moscone Convention Center to the new main library to the Giants baseball park and Mission Bay. “

Legislative Analyst Harvey Rose released his initial analysis of the project on Friday. The $120 million plus interest that the city is paying to the Warriors would be partially offset by the $30 million the team would pay for Seawall Lot 330, a one-time payment of $53.8 million (mostly in development impact fees), annual rent of nearly $2 million on its 66-year lease of Piers 30-32, and annual tax and mitigation payments to the city of between $9.8 million and $19 million.

But the report also notes that many city departments and agencies – including the Department of Public Works, Municipal Transportation Agency, and the Police Department – have yet to estimate their costs. Both Johnston and Matz emphasized Rose’s conclusion that the project is “fiscally feasible” – the determination that supervisors will have to agree with to move the project forward – but the report also noted “the finding of ‘fiscal feasibility’ means only that the project merits further evaluation of environmental review.”

My experience as a high level financial advisor and city administrator for Mayors Moscone, Feinstein, Agnos, Jordan, Brown, and Newsom, and current President of the City’s Bond Oversight Committee cause me to write in the hope that you will reject the outrageous 13% interest rate that the developers of the waterfront arena are proposing to charge the City for their cost of replacing Piers 30/32.

In my years as General Manager of Public Utilities, the Municipal Railway System, Water and Hetch Hetchy, and later as the Chief Administrative Officer for the City and County of San Francisco, I took probably more that a billion dollars worth of various debt instruments to the Board.

Never…even in the worst days of highest modern era interest rates of the 1970’s hovering at 20% …never did I ever bring a 13% City borrowing to the Mayor and the Board of Supervisors for approval.  Quite simply, I would have been ashamed of such a recommendation.

In today’s markets it is incomprehensible to have such a stunning recommendation brought to your honorable Board in such haste.

Even more remarkable is the fact that just weeks ago, Allentown, Pennsylvania has just procured a 4.78 % interest rate for $224.4 million of taxable bonds to help build with private contributions a hockey arena for 8500 seats.

No Board of Supervisors I ever appeared before would tolerate such dramatic discrepancy.

It is with this in mind, I would most respectfully urge you to send this proposed deal back to the developers, instructing the City’s negotiators not to bring it back without a far more favorable interest rate for City tax payers not to exceed a maximum of 7.5%.

And that would still be almost twice what the City would need to pay for City issued debt and more than amply compensate the developers for any risk premium that they allege that they are taking.

Any such instruction from you to the City negotiators should also make it clear that they are not to make any new concessions to the developers in exchange for achieving a still high, but eminently more reasonable interest rate.

Thank you for your attention.

1.     The Warriors Arena negotiates 13% interest on $120 million from San Francisco when the City of Allentown in Pennsylvania just issued $224.4 million of taxable bonds for an arena at an average interest rate of 4.78%.

Oct 10, 2012 – About $224.4 million in municipal bonds were sold last week to help finance arena construction. City officials say the issuance costs are about …