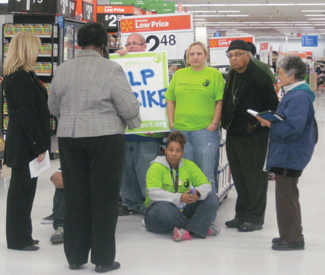 On Nov. 2, a half-hour before the 6am grand re-opening of the newly remodeled Walmart store in Richmond, six workers on the late-night shift donned matching lime-green T-shirts and staged a sit-in next to the Customer Service desk.

“We’re tired of mistreatment at work,” explained Walmart worker Mario Hammod, “of not being treated with dignity and respect.”

Outside, a small group of union members, clergy, and other supporters stood in the dark, holding a huge banner reading “Walmart on strike: End the retaliation.”

This small, peaceful protest was a moment in “one of the most exciting labor campaigns this year,” according to San Francisco Jobs with Justice coordinator Gordon Mar. “Because it’s an example of workers going on the offensive, not just fighting to protect what they have. It’s also exciting that workers are taking on the largest corporation in the world.”

The national Walmart workers’ Organization United for Respect at Walmart (OURWalmart) is not a union, members insist, but simply an organization of workers who want Walmart to improve the pay and working conditions of its low-wage workers, or in Walmart-speak, “associates.”

Like participants in the Arab Spring, many Walmart workers across the country have found each other through social media: the OURWalmart Facebook page and Twitter. An organization called Making Change at Walmart, funded by the United Food and Commercial Workers (UFCW), has also hired organizers, including many former Walmart workers, to spread the word.

Organizing mostly under the radar for the last two years, OURWalmart grabbed public attention in September with a strike of 30 workers in Southern California, followed by a one-day national strike Oct. 10 — organizers say workers from 28 stores in 12 states participated. Only a handful of workers in each store have walked off the job so far, but that’s how social movements begin, said Kasi Farrar, an organizer with Making Change at Walmart.

Walmart workers and their supporters are planning demonstrations in the Bay Area and across the country at Walmart stores on Black Friday, the day after Thanksgiving, traditionally the biggest shopping day of the year. Before that, on Nov. 14, a demonstration in San Leandro is set to protest terminations and the cutting of hours of OURWalmart members, which they see as retaliation for protests.

Dominic Ware, one of 20 Bay Area Walmart workers who participated in the national strike, joined 200 others from around the country Oct. 10 at Walmart corporate headquarters in Bentonville, AK, demanding an end to retaliation against workers who protest company practices. The best thing about the gathering in Bentonville, said Ware, “was seeing how all the people stood up, different races, ages, ethnicities, all coming together with one goal, to make this company right, the way Sam Walton had it, with respect.”

OURWalmart members frequently appeal to ideals expressed by Walmart founder Sam Walton. The organization’s Declaration of Respect calls on Walmart to “live up to Mr. Sam’s promise of ‘respect for the individual.'”

Despite pay levels low enough that many Walmart workers rely on food stamps, Ware and many of his co-workers insist that their main goal in organizing is “respect.” Other demands include a minimum wage of $13 an hour, affordable health care, freedom of association, and equal opportunity, given that Walmart has been a frequent target of formal complaints and lawsuits over gender and racial discrimination.

Semetra Lee, the single mother of a 10-year-old son and 6-year-old twins, started working the late-night shift at the Richmond Walmart store in August, hired to help with the remodeling.

“The very first day,” she said, “the managers started off yelling and screaming. ‘You guys are lazy, the worst crew I ever worked with.’ Instead of saying ‘get the tool,’ it was yelling “go get the goddamn tool!’

Lee was especially angry about comments she saw as racist. One night a young African American worker tied a rope around his waist to move a heavy counter. “The supervisor, an older, Caucasian man, said, ‘If it was up to me I would tie it around your neck.'”

The work demands seemed impossible to meet. “You have 20 people doing an amount of work it would take 50 people to finish,” said Lee, “and they kept saying ‘hurry up, hurry up, you guys are moving too slow.'”

A report issued last month by Making Change at Walmart criticized what it called Walmart’s “low-road business model.” The report charged that a recent push for increased productivity has meant short staffing and more pressure of the kind Lee described.

Walmart spokesperson Dan Fogleman denied that the productivity program had led to more pressure on workers, saying rather that technology like self-checkout had freed more associates to help customers. “We staff the stores to meet the needs of our customers,” he said.

But Amanda Grenier, who worked at Walmart for seven years and is now on staff at Making Change at Walmart, charged that the company’s scheduling shows a “total disregard for associates’ wellbeing.” When she was an hourly worker supervising others who worked at cash registers, she said, “Some of the women working there had to find daycare, so they asked for morning shifts. There were morning shifts open, but the managers wouldn’t work with them. They said the associates had to have ‘open availability.’ [Walmart says] they support people going to school, but they cut your hours to retaliate if you ‘close’ hours [to go to classes].”

Fogelman disputed this picture, saying that Walmart’s scheduling system is “designed to build associates’ schedules around the times they are available.” He added that Walmart’s “pay structure” is “very competitive” — hourly associates who work full time, at least 34 hours a week, earn an average of $12.54 an hour, and have many opportunities for advancement.

Raymond Bravo, who has been working at the Richmond Walmart store for about 17 months, said he makes $9.85 an hour, which includes an extra $1 for working the late-night shift. “What I’m getting paid is crazy,” he commented, adding that he was glad he didn’t have to support children on his pay.

But Bravo was more indignant about what he saw as retaliation for wearing an OURWalmart T-shirt to work. After he did that, he said, “My manager was really on my case, assigning me more work than I could do in a night.” After Bravo complained, he said, “I got my hours cut to 24 a week.”

THE RIGHT TO PROTEST

If open protest brings retaliation, why not keep the organizing underground? “The number one mission for OURWalmart,” said member Ware, “is to give knowledge to employees.” Specifically, “to let other workers know, if there’s something wrong on your job, it’s not just you, there’s a whole group of individuals fighting for you.”

The campaign also lets workers know they have a right to organize. On OURWalmart’s Facebook page, a Walmart worker recently posted his view that members were crazy to take such risks, adding, “You have no rights — you’re not in a union.”

An immediate response from a worker-activist explained that, on the contrary, the National Labor Relations Act gives all workers, whether or not they are union members, the right to take “concerted action” to improve their jobs, and bars employers from retaliation or intimidation. OURWalmart has filed dozens of “unfair labor practice” charges against Walmart, including charges on behalf of two fired Bay Area workers.

These rights have been on the books for 75 years, however, and workers know it’s common for employers to fire people who lead protests or union drives. OURWalmart’s strategy is to use publicity as a protection against retaliation.

While they say retaliation still occurs, workers won an oblique victory when Huffington Post published a leaked seven-page memo from Walmart management dated just before the Oct. 10 strike. The memo instructed local managers not to retaliate against workers who walked out.

Walmart spokesperson Fogelman emphasized that, “We have strict rules prohibiting retaliation,” adding that if any employees feel they have experienced retaliation, “we want to hear about it.” He pointed to Walmart’s Open Door policy, which encourages any employee to bring issues to managers.

The catch, say OURWalmart members, is that the door is open to only one employee at a time. “We find matters are best resolved on a personal level,” explained Fogelman.

“Open Door doesn’t work,” responded Richmond Walmart worker Hammod. “There are two or three of them and only one of us. They can twist your words any way. The only way is to show unity.”

Despite what he said is a clear pattern of retaliation, San Leandro Walmart worker Ware added that open protest is important because it’s “leading by example.” Simone Mock, a UFCW member on leave from her grocery-store job to work for Making Change at Walmart, said the company creates “an intimidating atmosphere. That’s why it’s so powerful when someone does speak up. The other workers see it, and it’s contagious.”

Labor and community activists say the workers’ actions are contagious beyond Walmart. Since the Southern California strikes, said San Francisco Jobs With Justice (JWJ) coordinator Gordon Mar, “We’re seeing a tremendous amount of excitement and interest, people contacting JWJ asking ‘how can I get involved?'”

When JWJ and the Work and Families Coalition (WFC) called an initial meeting of supporters in San Francisco last month, “the response was overwhelming,” said Jenya Cassidy of the WFC. It’s not just activists, she added — “parents at my kids’ school are excited about it.”

“I hope this really sparks something,” Cassidy added. “It has already, at least in people’s imaginations.” Some respond to the very idea of challenging Walmart: “I look it like David and Goliath,” said Richmond Walmart worker Bravo.

Beyond the dramatic appeal, change at Walmart would “have a major impact throughout the whole economy,” Mar said.

“Walmart is the number one retailer in the world,” explained San Leandro Walmart worker Ware. “If Wamart changes, all the other [companies] all down the line will have to change.” www.forrespect.org www.makingchangeatwalmart.org