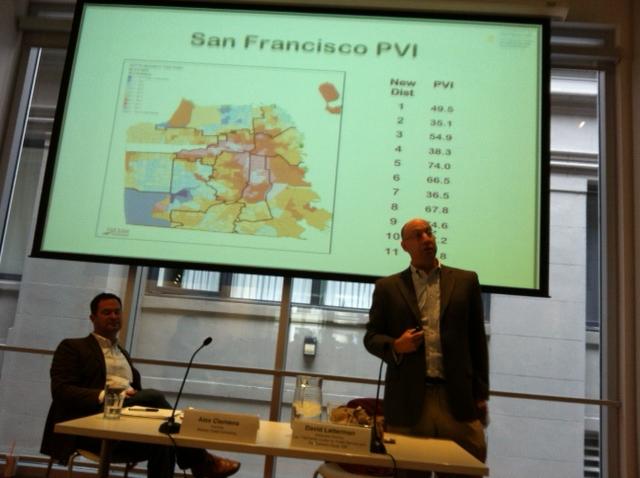 I’m still a bit too bleary-eyed for serious political analysis on D5 or other races today, but I’ll offer a few of my own post-election observations and those that politicos Alex Clemens and David Latterman delivered during their usual political wrap-up at the SPUR office this afternoon, noting how this election has altered local political dynamics.

“The Board of Supervisors as a whole is becoming a helluva lot more interesting,” Clemens said, noting that progressive District 5 just elected London Breed, the most moderate candidate in that race, while conservative District 7 gave the most progressive candidates, Norman Yee and FX Crowley, its top two spots (with Crowley the likely winner once ranked choices ballots are tallied).

The result is that both the progressive and moderate blocs lost their most reliable votes to the squishy center, so that “determining what’s going to happen before it happens just got more difficult,” a dynamic that could play out most strongly on land use issues.

“I think land use politics is going to be even more interesting,” Clemens said, with Latterman adding, “In this city, all politics really comes down to land use.”

Assessor Phil Ting’s election to the Assembly also now paves the way for Mayor Ed Lee to appoint his replacement, with Sup. Carmen Chu widely considered the clear favorite, which would in turn give Lee an appointment to her District 4 seat on the board.

Yet Clemens speculated that Lee may wait to replace Chu until after the next Board of Supervisors is seated in early January – which would allow that person to finish her final two years and still run for an additional two full terms, whereas the Charter would otherwise limit that person to one more term – which could complicate an already complicated election for board president. Sups. Jane Kim and Scott Wiener are the likeliest contenders, but anything could happen.

“Counting to six from 10 is going to be so much fun to watch,” Clemens said, although he added, “I believe in the era of Ed Lee, it’ll all be worked out beforehand.”

Neither Clemens nor Latterman agreed that the overwhelming expenditures on political hit pieces (mostly against D1 Sup. Eric Mar, who won a surprisingly big margin of victory) by allies of Lee, or the fact that they turned on Sup. Christina Olague in nasty fashion, would diminish Lee’s public standing or the aura of civility he’s tried to cultivate.

Personally, I don’t agree, and it think progressives have been given an opportunity to highlight the money-driven nature of the agenda that Lee and his billionaire backer Ron Conway have for San Francisco. It’s also significant that the most anti-progressive candidates – Lee’s City College appointee Rodrigo Santos, D1’s David Lee, and D7’s Mike Garcia – all fell far short of victory.

Progressives now have a chance to set a positive, proactive agenda for the city, of the kind eloquently voiced by new school board member Matt Haney, whom Clemens thanked for running such a strong and positive campaign, as well as top City College finisher Steve Ngo and Sup. David Campos, who shared an election night campaign party and positive message about progressive prospects.

“That’s what me, Steve, and David were saying here tonight,” Haney told me, calling for an end to the adversarial style of practicing politics. “Our values are love and compassion.”

Latterman and Clemens did acknowledge that that record-breaking spending against Mar may have backfired, but they gave more credit to Mar’s campaign. “You don’t bet against [Mar campaign manager] Nicole Derse in a ground game in the last week of the campaign,” Latterman said.

Derse, who was there, noted its innovative voter identification efforts and strong grassroots volunteer push, a drive partially helped by those reacting to the big-money attacks. Latterman also acknowledges that the strange and controversial videos attacking Mar didn’t help, telling the crowd, “And tactically, don’t have the Realtors make the videos.”

As for District 5, neither politico claimed to fully understand the complex variables that shaped the race.

“It’s hard to unravel what happened here,” Latterman said of the D5 race, noting the complicated dynamics created by Olague’s mayoral appointment, her vote to reinstate Sheriff Ross Mirkarimi, Julian Davis’ problems, and the outside spending. He praised Breed’s campaign, calling it a “a solid win,” but he also said Breed’s independence helped her and she might have suffered the same fate as Olague if she had gotten the appointment from Lee back in January: “I think Supervisor Breed doesn’t win this race; challenger Breed did.”