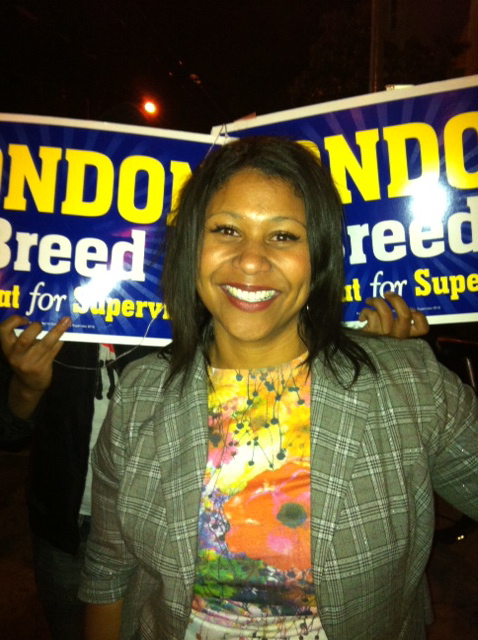 There’s so much to say about the District 5 supervisorial race, whose top five finishers’ parties I attended tonight, gathering interesting perspectives from each candidate. But given the late hour, I’m just going to run a few thoughts and quotes and save most of it for a more in-depth report tomorrow, because there’s a fascinating story to be told here.

Christina Olague, John Rizzo, and Julian Davis – respectively the second through fourth place candidates – each presented as more progressive than the likely winner, London Breed, who has an 8-point lead going into the final ballot tally and ranked choice tabulation. They and their allies raised concerns that renters were undermined by Breed’s victory in one of the city’s most progressive districts.

“It was a lie. I’m a renter, I live in a rent-controlled apartment,” she told us just before midnight outside in party at Nickie’s on Haight. “I will do everything to protect rent control. I will work with the Tenants’ Union. I’m here to be everybody’s supervisor.”

She pledged to work productively with all the progressive groups who opposed her, such at SEIU Local 1021, whose members “ take care of my mom at Laguna Honda,” while others are her friends.

“The pettiness of politics is over and it’s time to move forward,” Breed said.

It was a widely sounded theme among jubilant progressives tonight, but D5’s (likely) runner-up Olague sounded a bit of bitterness when we caught up with her a little after 11pm as she was leaving her party at Rassela’s on Fillmore. “The Left and the Right both came at me,” she told us.

She felt unfairly attacked by progressives after being appointed to the D5 seat by Mayor Ed Lee, saying her only bad vote was in favor of the 8 Washington luxury condo project, which Sup. Eric Mar also backed without losing progressive support. “From the beginning, people were hypercritical of me in ways that might not be completely fair.”

Then, this fall, Mayor Lee’s people – chief of staff Steve Kawa, tech point person Tony Winnicker, and billionaire backer Ron Conway – turned on her after a series of votes culminating in the one to reinstate Sheriff Ross Mirkarimi, resisting what she labeled “a power play” aimed at progressives.

Yet she believes her key vote in favor of CleanPowerSF, coming after her support for Sup. John Avalos getting new revenue out of the business tax reform Prop. E, was really what turned Conway and the downtown crowd against her and attracted outrageous attacks that she condoned domestic violence and supported Big Oil.

“They don’t want to say it, but it was the whole thing around CleanPowerSF. Do you think PG&E wanted to lose its monopoly?” she said. “It’s not about disloyalty, it’s about power.”

Julian Davis was similarly deflective about his campaign’s fourth place finish, despite having a strong presence on the streets today and lots of energy at his crowded campaign party at Club Waziema, after he weathered a loss of prominent progressive endorsements over his handling of sexual misconduct allegations.

“It’s been a challenging few weeks, but I’ve kept my head held high in this campaign,” Davis said, decrying the “self-fulfilling prophecy of the local media” that didn’t focus on the progressive endorsers who stayed with him, such as former D5 Sup. Matt Gonzalez and the SF Tenants Union.

Third place finisher John Rizzo, whose party at Murio’s Trophy Room party reflected his less-than-exuberant campaign, was generally positive about the night, although he expressed some concerns about the agenda of the “people putting up hundreds of thousands of dollars” into this race and the D1 contest, where progressive favorite Eric Mar won a strong victory.

I stopped by Breed’s party twice tonight: at the end, and a little before 10pm, when the results were coming over the television proclaiming that voters in Maryland approved same-sex marriage and Colorado voter legalized marijuana – and the room erupted in cheers – and Oregon voters rejected legalizing weed, drawing big boos.

Breed’s was a liberal crowd, a D5 crowd, and a largely African American crowd. Rev. Arnold Townsend, who is on the Elections Commission and local NAACP board, told me as I left Breed’s party the second time, “It’s a good election for my community. The black community was energized by this.”

New school board member Matt Haney, whose party at Brick & Mortar was my final stop of the night, also likes Breed and said her likely victory was another part of “a good night for progressive San Francisco,” which stands for important egalitarian values. “We are the ones about equity and compassion. That’s what this city is about.”