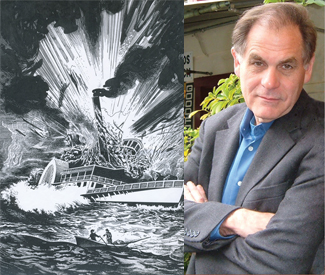 LIT Every San Franciscan has at least some knowledge of the city’s pre-1906 earthquake days (Gold Rush!), with the more curious able to rattle off a few more random tidbits (Emperor Norton!)

It’s possible, though, that no other San Franciscan hungers for historical facts like Robert Graysmith, a former San Francisco Chronicle journalist and cartoonist best-known for his true-crime classic Zodiac — the basis for the 2007 David Fincher film. He also wrote The Murder of Bob Crane, which was made into the 2002 film Auto Focus.

Graysmith’s latest is Black Fire: The True Story of the Original Tom Sawyer and of the Mysterious Fires that Baptized Gold Rush-Era San Francisco, which uncovers Mark Twain’s friendship with the real-life Sawyer — a colorful figure in the city’s early firefighting culture — and paints a detailed portrait of San Francisco, circa 1849-1866. It’s jam-packed with notable residents whose long-ago importance lingers in the city’s street names (Broderick, Brannan) — plus mustachioed hooligans and “The Lightkeeper,” an arsonist as mysterious as he was destructive. The book also spills over with highly unromantic descriptions of what day-to-day living must’ve been like: raucous, dangerous, and astonishingly muddy. I spoke with the longtime local about his latest tale.

San Francisco Bay Guardian How did you find out about the original Tom Sawyer?

Robert Graysmith Back in 1991, I saw this little article about “torch boys,” and I thought, “What’s this?” No names or anything. Basically, it was boy firefighters. Like with Zodiac, the Bob Crane book, and the Trailside Killer [in The Sleeping Lady: The Trailside Murders Above the Golden Gate], I always like to do the first book on a subject because you start from zero. You have to go to the actual records. You have to go live where the people did. You immerse yourself. You literally get to live what I call “the great adventure.”

So I decided I was going to write about these boy firefighters, because how could anyone not have written about them? A little bit later, I discovered there was an arsonist — the name I’ve given is a name I’d heard before, the Lightkeeper — who’d burned down all of San Francisco six times in 18 months. I thought, this is an even greater story! And then I came across the original Tom Sawyer, and I was going through these journals and diaries and things, and there’s Mark Twain, and they’re friends! Gradually it developed into the first biography of Tom Sawyer, and yet at heart it’s a true crime story about catching this arsonist, and the making of a great city.

But what I really came away with was, even without meeting Mark Twain, Tom Sawyer was a great man. He saved 90 lives at sea after an exploding steamboat tragedy, he fought for the rights of volunteer firemen, and who knows how many lives he saved during fires. As he said in interviews back in 1898, he’d been with the very first volunteer fire company in California. Every aspect of firefighting in San Francisco, Tom Sawyer encompassed that.

SFBG Even beyond Tom Sawyer, Black Fire talks quite a bit about firefighting history in San Francisco.

RG I love that. Isn’t that fascinating? [When I’m writing] I want to know every single thing. If a house is on fire, I want to know who lives there, who got out, how the fire started, the wind direction, the weather, the kind of food they ate. My goal is this: if Tom Sawyer came back today, he would say, “How did he know that?” I like to play that game with myself and I like to do that with the reader. I’d like the reader, at least once on every page, to say “I didn’t know that!”

But I hope I did a good job. I loved the book and I loved doing the drawings for it. [I had so much material that] the companion book, Black Water, is already done — it’s an incredible story, so I’m really counting on Black Fire doing well so we can bring it out. I can’t really tell you what it’s about, but there’s a lot of archaeology involved, and it’s the exact same time period, with a few of the same characters.

SFBG The characters in Black Fire are pretty memorable.

RG I love the characters, like “the ugliest man in San Francisco” — and maybe in the world, we weren’t sure! You’ve got a US senator, a gunfighter, boxing champs, con men. Incredibly bigger-than-life figures, and these are the guys who saved the city! In a city where everybody was terrible, these slightly bad guys were the heroes. They really were what held us together, pulling these water wagons up hills, fighting fires with tiny hoses. It was so overwhelming, the devastation — because we had paper houses, and they kept building the same houses over again. I love the fact that they fought against impossible odds and succeeded.