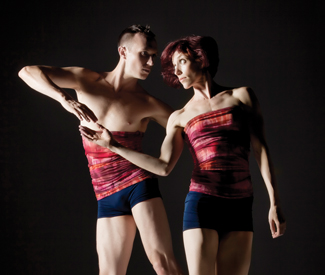 
DANCE Wendy Rein and Ryan T. Smith may be best known for their hit biannual show, the CONCEPT series — where you munch free popcorn while watching informal presentations of local choreography. Their own company, RAWdance, performs only occasionally. So to see them in a full-evening program, "re: framed" (Nov. 2-4 at ODC Theater), was to realize just how special their work is. Raw it ain’t, conceptual it is.


Of the four pieces, only one of them, Burn In, Part I, consisted of what this duo does best, choreographing on their own sinewy and fiercely interacting bodies. Described in the program as the beginning of a larger piece to be shown next year, Burn seemed to emanate from an intense searching for connection between two people. An underlying tension colored every move, as they invaded each other’s spaces and Rein, incubus-like, hung on Smith’s back and plopped on his lap. Despite the intensity of these dramatic and detailed encounters, emotions were held in check by the analytical processes that seemed to have generated the movements.


Breton Tyner-Bryan, first seen through some slats of light, intruded into the relationship. Her presence became a perhaps corrosive element that heated up an already fiery intensity. It was as if some kind of apocalyptic terror was descending on these slithering and shivering creatures. In the last image Smith was hanging onto Rein’s legs as a beam of red light contracted onto her back, a mountain of quivering muscles. It looked like a piece of raw meat.


For Double Exposure, the two dancers asked for original two-minute duets from good and stylistically different choreographers. They got a pleasant divertissement. Ann Carlson gave them an amusing Beauty and Beast encounter based on rhythmic panting. Joe Goode, punning on the company name, created a sly roll in the hay, followed by a verbal ping-pong match. KT Nelson’s frolicking duet was short, musical, and witty. The most intriguing contribution came from Shinichi and Dana Iova-Koga. In skull-hugging caps and long, simple gowns, the couple’s slow progression and reversal of direction looked like Edward Gorey might have been designed it.


The current version of The Beauty Project is the result of rethinking for the stage of a 2009 work originally performed in an empty store at the Westfield San Francisco Centre. I wish I had seen it there, in the context of all those shop windows with their empty-faced mannequins.


The thematic material of the doll that comes alive, of course, is a trope already used by 19th century ballet choreographers — but Ryan and Smith’s take, for five women in tiny dresses and black bob wigs, was fully contemporary. Four silver-painted chairs become tools to architecturally redesign the stage. Designed on an invisible grid, the dancing followed clear patterns of oppositions, canons, and unisons that break up and reconfigure themselves. Though highly formal — that’s the essence of who these choreographers are — the work’s fast-paced rhythms constantly shifted moods as the dancers vacillated between vacuous stares and come-hither sexual invitations. They collaborated and competed, borrowing the assertive strides, half-turns, and hip thrusts from the runway. Every once in awhile, the "models" stepped out of their roles, showing glimpses of the anxiety, aggression, and boredom that makes them human. One of the dancers stared into the audience from downstage left, a look of forlornness about her. However, wrapping her up in cellophane and carrying her off looked too easy, as if the choreographers couldn’t figure out how to end this slight but well-crafted work.


The evening’s closer, 66 Measures, was a throwaway study of fairly standard patternings for a sextet of dancers, each inside a circle of light. They were dressed in a variety of black and white stripes that looked good. But clothes, of course, don’t make the emperor.