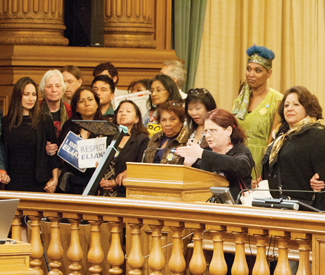 ESSAY San Francisco’s progressive movement needs restoration and renewal. Our focus on immediate fights and indignities has blurred our perspective on the larger, longer struggle for a more just, sustainable, and inclusive society. It’s time to regain that vision by taking a new path and practicing a different kind of politics.

Back-to-back local scandals involving progressive male politicians treating women badly have spawned waves of ugly reactions and recriminations on all sides. Those frustrations have bubbled up against an overwhelming tidal wave of money from wealthy individuals and corporations used to deceive and divide the voting public on the local and national levels.

Real concerns about domestic violence have been reduced to an election-year weapon, cheapening an important issue. Stubborn injustices like lack of gender equity in pay and promotions and access to contraception have been countered with mythical “binders full of women,” a new take on the old dodge of personal responsibility. Unacceptable groping or grabbing is alternatively denied, dismissed, or blamed on the women. Little has changed except the modern polish on our dated pronouncements.

The turbulence of this political year has tested our tolerance and we’ve lost our balance, if not our minds from time to time. But we can learn from our mistakes. San Franciscans should be leading the way forward, not just with our gadgets and technological innovations, but with the example we set in how we practice our politics.

Perhaps I’m not the best one to call out my comrades and propose our next steps. I’m a single, straight man, and I’ve fought as fiercely as anyone on behalf of the Guardian’s progressive values and worldview, sometimes resorting to the same nastiness that we’ve seen bubbling over this year.

But as I’ve covered this year’s high-profile political scandals involving Ross Mirkarimi and Julian Davis for the Guardian — and read the vitriolic comments reacting to my stories and expressed in public forums — it has caused me to rethink my own approach and that of the progressive movement. So I want to offer my insights, make amends, and contribute to the dialogue that our community desperately needs to have.

Let me start by saying that I understand why people perceive political conspiracies against Mirkarimi, Davis, and other progressive politicians in San Francisco. Wealthy interests really do have a disproportionate influence over the decisions that are shaping this city’s future, to the detriment of the working and creative classes.

A small group of powerful people installed Ed Lee as mayor using calculated deceptions, and he has largely been carrying out their agenda ever since, practicing dirty politics that have fractured and debilitated the progressive movement. In this election cycle, we saw the willingness of Lee’s deep-pocketed benefactors, such as right-wing billionaire Ron Conway, to shatter previous spending records to achieve their unapologetically stated goal of destroying San Francisco’s progressive movement.

But if we want to replace economic values with human values — emphasizing people’s needs over property and profits, which is the heart of progressivism — we can’t forget our humanity in that struggle. Choosing conflict and the politics of division plays into the hands of those who seek to divide and conquer us. We need to embody the change we want to see and build new systems to replace our ailing political and economic models.

When Mayor Lee decided in March to suspend Sheriff Mirkarimi without pay and without any investigation — and by the way, showing no interest in hearing from the alleged victim, Eliana Lopez — progressives had good reason to be outraged. Domestic violence advocates and the Chronicle’s editorial writers may not see it this way, but I understand why it seemed politically motivated.

I also understand why people wanted Mirkarimi gone, believing that someone who admitted to domestic violence couldn’t possibly remain San Francisco’s chief elected law-enforcement officer. This was a black-and-white issue for them, and they saw progressive opposition to his removal as condoning his actions, despite our arguments that his criminal punishment was separate from the question of what the standard should be for removing an elected official from office.

Both sides fervently believed in their respective positions and were largely talking past one another, unable to really communicate. Positions hardened and were charged with emotion until they boiled over during the Oct. 9 hearing on Mirkarimi’s removal.

But there’s never any excuse for booing or making derogatory comments to domestic violence advocates who braved a hostile crowd to offer their opinions on the issue. Tolerance and respect for differing opinion are core progressive tenets, and our faith in those values must override our emotional impulses, which only feeds a fight that we lose just by fighting.

It was against this backdrop — and partially as a result of this polarized climate — that revelations of Davis’ bad behavior toward women were made public. Davis is a friend of mine, and I was aware that he could act like an over-entitled jerk toward women, particularly during his worst period several years ago, although I had no idea how bad it really was.

As with many political scandals, the issue here wasn’t just the original incidents, but how someone responds to them. That’s the mark of someone’s character and integrity. Most people do the wrong thing sometimes, but if we learn from our mistakes and truly make amends — which isn’t something we claim, but something offered to us if our intentions seem true — then we become better people.

As we said in our editorial withdrawing our endorsement from Davis a few weeks ago, being a progressive has to be more about the movement than the person, and it’s time that we remember that. So as a movement, the moment has arrived to come clean, admit our flaws, start anew, and try to lead by our example rather than our rhetoric or our stands on the issues.

They say confession is good for soul, so let me give it a shot. Shortly after Sup. Jane Kim took office in 2010, we had a series of confrontational conflicts over some votes she made and her failure to come clean about what her relationship was with Willie Brown, which seemed to me related. She offered a misleading answer to my question and then said she wouldn’t answer any more questions from me, which infuriated me because I believe politicians have a duty to be accountable. And so I continued to be hard on her in print and in person.

Now, I realize that I was being something of a bully — as political reporters, particularly male reporters, have often been over the years. I want to offer a public apology for my behavior and hope for forgiveness and that our relationship — which was a friendly one since long before she took office — can be better in the future.

While I felt that I was treating Kim like I would any politician, and I probably was, the fact is that the style of combative political exchanges — embodied in the last decade by Mirkarimi, Chris Daly, Aaron Peskin, and many others, mostly men but some women like Carole Migden — is what has brought the progressive movement and San Francisco politics in general to the lowly point that we now find ourselves.

My old friend and ex-girlfriend Alix Rosenthal and other political women I know have long tried to impress upon me the value of having more females in office, regardless of their ideology, as long as they aren’t actual conservatives. I have always bristled at that idea, believing ideology and political values to be more important than identity politics, which has been used as a wedge to divide the progressive movement.

At first, I supported Davis because I saw in him a progressive warrior. But most progressives know in our hearts that nobody wins wars. We are all diminished just for fighting them, and their fallout can be felt in unexpected ways for years to come. Even though I agreed with the Board of Supervisors decision to reinstate Mirkarimi, I felt sad and sick watching the celebrations that followed, and I understood that winning that battle might do real damage to the progressive movement.

So I’m proposing that we just stop fighting. We need to stop demonizing those we don’t agree with. “We are not the enemy,” Domestic Violence Consortium head Beverly Upton told supervisors at the Mirkarimi hearing, and she’s right. We can still disagree with her position, and we can say so publicly and call for her to talk to Lopez or take other steps, but we shouldn’t make her an enemy.

Having written this essay before the Nov. 6 election, I don’t know the outcome, but I do know progressive power is waning just as we need it most. Landlords and Realtors are intent on rolling back renter protections, while technology titans and other corporate leaders will keep pushing the idea that city government must serve their interests, something the mayor and most supervisors already believe. And they’re all overtly hostile to progressives and our movement.

Against this onslaught, and with so much at stake, the temptation is to fight back with all our remaining strength and hope that’s enough to change the dynamics. But it won’t. Now is the time to organize and expand our movement, to reach out to communities of color and the younger generations. We need to grow our ability to counter those who see San Francisco as merely a place to make money, and who are increasingly hostile to those of us standing in their way.

It may sound trite, but we need to meet their hate with our love, we need to counter their greed with our generosity of spirit. In the year 2012, with all the signs we see in the world that the dominant economic and political systems are dying, we need to work on building our capacity to create new systems to replace them. If they want to build a condo for a billionaire, we should find a way to build two apartments for workers. If they want to bend the campaign rules and dump millions of dollars into one of their candidates, we should use free media and bodies on the street to stand up for someone with more integrity.

Our heroes are people like MLK and Gandhi, and — and most recently and perhaps more relevantly, Arundhati Roy, Amy Goodman, and Aung San Suu Kyi — and we should heed their examples now more than ever. I’m not going to presume to lay out a specific agenda or new tactics, leaving that leadership to those who embody the new approaches and visions that I’m willing to learn and lend my energies and experience to supporting.

But the one essential truth that I’ve come to embrace is that our current struggles and paradigms are as unsustainable as the system that we’re critiquing. It’s time to embrace a new way of doing things, and to join the vast majority of people around the world in creating a new era.