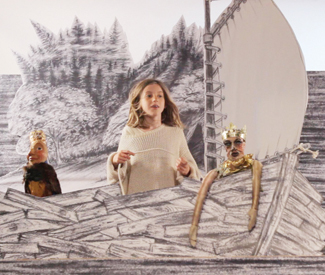 FILM First and foremost, make it your business to see Jason Becker: Not Dead Yet, which is playing the San Francisco Film Society’s “Cinema By the Bay” series and the San Francisco Documentary Film Festival, both of which open this week. (See DocFest article elsewhere in this issue.)

Director Jesse Vile’s film shares some themes with The Sessions, in that its subject is a fiercely talented person who manages to be wildly alive despite being almost completely paralyzed. Hailing from Richmond in the East Bay, Jason Becker got his first guitar at age five as a Christmas present; it wasn’t long before his family realized he was a genuine riff-slingin’ musical prodigy. Home movies and MTV-style videos capture the teenage metalhead’s ascension from school talent shows to jam-packed arenas, and his delight at being hired for a highly sought-after gig in David Lee Roth’s post-Van Halen band.

He was just 20 — big-haired, wide-eyed, and fond of saying “Daaaang!” whenever anything took him by surprise — when he sought medical treatment for what he thought was a pinched nerve but what turned out to be ALS, or Lou Gehrig’s disease. Though his body deteriorated rapidly, his remarkably supportive family invented a way for him to communicate using only his eyes. Today, he can no longer play his beloved instrument, but he still makes music — and takes delight in embarrassing whoever’s “translating” for him by cracking off-color jokes.

Closing night selection CXL (from first-time feature director Sean Gillane and writers Theo Miller and Katherine Bruens) follows perpetually bummed-out writer Nolan (Cole Smith), whose Mission District existence is so realistic (oy, that awkward hipster house party) the film could only have been made by a local. Though he still pines for his ex, he falls for Cassie (Lisa Greyson), whose penchant for zany behavior lurches her dangerously close to Manic Pixie Dream Girl status: “I open random doors!” she exclaims when Nolan asks her what she does for fun. Groan.

But wait! Thankfully, CXL changes course before morphing into Ruby Sparks 2 — a dark plot twist ushers in a cheerfully surreal second half, as Nolan’s book, hilariously titled Dehydrated Tears, becomes an unexpected success, and his relationship with Cassie (and with reality) evolves in ways I won’t spoil here. A recurring sight gag has a pack of Nolans trailing behind the real one — suggesting that maybe there are parallel realities at play, or just a guy with a hell of a lot of personal baggage.

Finally, film fans will remember photographer Lucy Gray for “Big Tilda,” a piece that projected huge digital collages of actor (and San Francisco International Film Festival favorite) Tilda Swinton onto SF’s City Hall as part of SFIFF 2006. “A Conversation with Lucy Gray” includes a screening of her short film debut, Genevieve Goes Boating, about a playwright who pens a whimsical story about a girl who sets sail on a homemade boat — narrated by Swinton, of course. *

“CINEMA BY THE BAY”