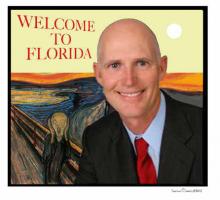 And so, thanks to Republican Governor Rick Scott and his Republican allies, the lines of voters were once again impossibly long at Florida voting places and many voters started chanting dramatically on national television, “Let us vote, let us vote, let us vote.” It was a chant that rang throughout many battleground states where Republicans had the power to reduce early voting and implement other policies designed to keep the lines long and to make it as difficult as possible for prospective Democrats to exercise their constitutional right to vote.

Guardian cartoonist Louis Dunn sizes up the situation. And I ask the Impertinent Question: Are Florida and other such places becoming third world countrIes? This kind of voter suppression and repression is an update of the old poll tax policy used in the South for generations to keep blacks from voting–and used eight years ago to put Bush into office over Gore, who won by more than 500,000 votes.  It has no place anywhere in the U.S. in 2012. The first thing Obama and the Democrats need to do is to move to investigate, prosecute, and criminalize this behavior.

Obama, let me predict, is going to win and he needs to aggressively assert himself and his presidency at the outset. This is a good place to start. b3

P.S. Thomas R.Julin, a noted Miami First Amendment attorney,  told me this afternoon that the election suppression in Miami  is “unbelievably awful.” http://www.sfbg.com/bruce/2012/11/06/miami-first-amendment-attorney-election-suppression-unbelievably-awful  B3