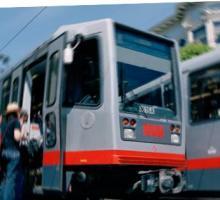 For a moment this morning, Mission Street looked the way it might in a world where the city actually got beyond cars. About a million people were a block away, on Market, and everyone with an ounce of sense knew not to try to drive downtown. So I rode my bike along a busy city street that was given over entirely to pedestrians, bicycles and Muni buses. The buses moved at a rapid clip with no traffic to slow them down. And despite the parade a few hundred feet to the north, it felt … quiet. Peaceful. Yes, Mission Street.

Imagine how easy it would be for transit to serve the downtown corridor if nobody drove cars. Imagine how comfortable people would be biking and walking to work. It just takes a Giants World Series (and a huge regional parade) to show us that a different urban world is possible.

Which brings me to free Muni for kids.

There’s enough money now, from a federal grant, to do a pilot program in San Francisco. Except that Sup. Scott Wiener thinks the money should go to general system improvements. I get it — Muni has lots of problems and Wiener thinks we should fix the system for everyone before we make it free for some.

I admit I’m biased — I have two kids who go to public school, and ride Muni. The school bus system is nearly gone; most kids can’t get an old-fashioned yellow bus in the morning or at night. So their only option is the have parents or friends drive them, or to ride Muni. Yeah, it would save me a little money if my kids didn’t have to pay, but it’s not making me choose between food and rent.

For a lot of low-income familes, the cost of Muni fare is a real issue — and it’s difficult getting a reduced-fare youth pass. (Among other things, you need a birth certificate or passport to prove your age; you think immigrant families including some members without documents are going to go to a government agency and present that sort of information?) It seems to me it’s the city’s responsibility to help young people get to school, and since we can’t afford school buses, this is one of the best options.

There’s another side of the story, though. Getting kids to ride Muni as a matter of normal course — showing them that it’s the best way to get around town — is a huge investment in the future. We can’t keep going on the way we are with personal automobiles, particularly in urban areas. We want to get to the point where just about everyone uses Muni or rides a bike or walks — and I say, start young.