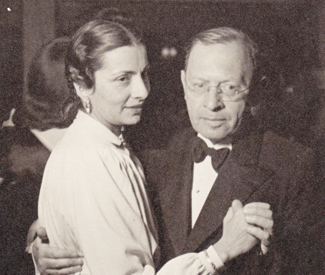 FILM When filmmaker Arnon Goldfinger’s grandmother, Gerda Tuchler, passed away at 98, she left behind a Tel Aviv apartment crammed with a life’s worth of objects. As The Flat begins, Goldfinger and his family — particularly his mother, Gerda’s daughter Hannah — have just started clearing out drawers and closets, sorting through the possessions of a woman who apparently never threw anything away. The discovery of several vintage fox-fur stoles, complete with faces and paws, elicits much mirth.

But it’s while flipping through Gerda’s papers that Goldfinger hits pay dirt: a copy of Der Angriff, the newspaper founded by Nazi Minister of Propaganda Joseph Goebbels. The headline: “A Nazi Travels to Palestine.” The Nazi was Leopold von Mildenstein, an SS officer with an interest in Zionism. In 1933, he made the trip with his wife and a German Jewish couple named Kurt and Gerda Tuchler — Goldfinger’s grandparents, who moved there permanently a few years later.

This shocking revelation propels Goldfinger’s fascinating documentary forward. It’s part family history, as Goldfinger learns for the first time the tragic fate of his great-grandmother, and part old-fashioned mystery, complete with digging for clues in dusty archives and basements.

“I somehow got this feeling that I needed to grab my camera and film it,” he remembers over the phone from Tel Aviv, thinking back to the family’s first day in the apartment after Gerda’s death. “When I realized there was so much stuff over there, I thought maybe I could make a short film out of it. The line was: what can you learn about people from the stuff they left behind?”

Of course, he soon realized that a short doc wasn’t going to be enough. The Flat really began to take shape after he placed a phone call to the von Mildenstein’s elderly daughter, Edda — incredibly, still living at the house outside Düsseldorf where her parents had spent most of their lives. “This call completely blew my mind,” he says. “That was the minute I knew, this is it.”

A visit to the friendly but guarded Edda came next, followed by a return trip with Goldfinger’s curious (but remarkably reserved) mother in tow. With its many twists and turns, The Flat is the rare documentary about history that’s also loaded with suspense.

“Speaking broadly, being a German Jew, we are the kind of people who like to plan ahead,” the filmmaker says. “Every time I went to shoot a scene, and I thought ‘This is what’s going to happen,’ almost every time the opposite happened. It’s like the story was showing me what to do during the journey of making it.”

Though The Flat focuses on the past, Goldfinger wanted to avoid using animation, re-enactments, or other techniques to illustrate what he couldn’t film. “One of the key things for me was to try, through the present, to tell the past. For me, the real emotions lie in the present and the perspectives of people toward the past,” he says. “We also really tried to edit it as close as possible to the way I experienced it, so the audience could view the events through my eyes.”

Letters, photos, and a necklace given to Edda as a girl indicate that — against what would seem to be all logic — the Tuchlers and the von Mildensteins renewed their friendship after World War II. Though he was baffled by this, Goldfinger was even more affected by another discovery.

“If somebody had told me before that one day I would make a film about my family and the Holocaust, I would never believe it,” he says. “For me this is the most shocking, even more than the Nazis and von Mildenstein and my grandparents. To think that I had a great-grandmother, and she was a [Holocaust] victim, and nobody talked about it. All of my family, my mother, we were under the impression that we had no connection to it.”

The Flat first screened locally at the 2012 San Francisco Jewish Film Festival, but it’s been enjoying successful runs in Israel and Germany for months. In Israel, Goldfinger says, the film has become “an event.”

“My aim was to take something that is very singular and personal and try to see the universal emotions and implications of the story — something that is deep enough that many people can share,” he says. “But I was very surprised. From the very first screenings, people said, ‘It’s exactly like in our family.’ And what they meant is that in their families, they also didn’t ask questions, or they don’t know enough about their parents’ pasts. I think it goes to show you that many people share these feelings, and that they really identified with what happened onscreen.”