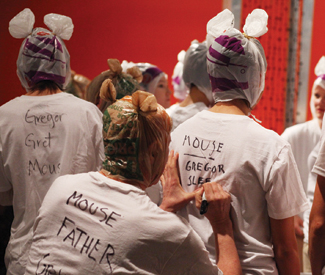 THEATER/DANCE A bobcat sat in the grass beside the main building at Headlands Center for the Arts one quiet morning last week. He (I say he because he’s “bob”) took no notice of me but instead nonchalantly lifted a hind leg over his shoulder and took a short tongue-bath. I was told he’d been seen hanging around a lot over the last few days, closer than usual, clearly trying to pass himself off as an ordinary housecat. Or looking for field mice. Whatever he was up to, he seemed relaxed and in no hurry.

Inside the building — one of the repurposed military barracks comprising the Headlands’ bucolic campus — the mood felt very much the same. Melinda Ring assured me this was an illusion, at least as far as she was concerned. As a small group of fellow resident artists drank coffee and chatted in an opposite corner of the otherwise deserted dining hall, the New York–based and Los Angeles–bred experimental choreographer explained, in a calm and good-natured tone, the amount of work still before her in further developing and preparing two back-to-back sessions of her Mouse Auditions.

This intriguing and thought-provoking meta-dance — in which local performers try out for a work based on Franz Kafka’s Metamorphosis that will never actually be realized — makes its West Coast debut this weekend as part of Headlands’ annual Open House, featuring new works and works-in-progress from this season’s multidisciplinary array of artists-in-residence.

Ring’s Mouse Auditions had its premiere at the 2010 Whitney Biennial as a site-specific live performance built on artist (and Ring’s good friend) Martin Kersels’ 5 Songs sculpture. While she already had had the idea of a performance built out of an endless audition, the opportunity to choreograph around the five-piece sculpture inspired some specifics, including her title.

“It was my most immediate response to Martin Kersels’ sculpture,” she explains, “a rather cartoonish monstrous Playmobil thing. I thought, ‘I see this populated by disaffected mice.’ Then, I’m an experimental choreographer, so mice make sense in that they are often experimented on. Plus, the creature that [Kafka’s character Gregor Samsa] becomes is most directly translated as vermin, not beetle. So I thought that gives me a pass. The word is crossed-out in the title because I’m not certain that finally, in the never-to-be performed work, the performers will be cast as mice.”

Packed inside that set of associations are Mouse Auditions‘ questions and concerns about art and commerce, working bodies, and the pliable nature of social identities and relations. Ring’s project focuses her would-be (but also actual) performers on the moments just before and just after the novella’s opening line, as Gregor awakens “from unsettling dreams” to find himself transmogrified. The exploration undertaken in the room, among strangers, uses a script (posted on Ring’s website) that draws directly from her own longstanding reflections on the economic realities of art making — and specifically those confronting dancers as laboring bodies.

“The two things that I’ve been focusing on with Metamorphosis are this idea of Gregor as a worker, the stress of his being a worker, the relationship with his boss, the obligation he has to his family — somehow mixing that up with the relationship that I’m trying to make with these people who would supposedly be my workers. And the other thing is this confusion and chaos that he experiences; that his body isn’t recognizable to him. It connects very directly to the way I’m working in [my] other highly choreographed dances. That really interests me, that experience he’s having.”

The Headlands residency is part of Ring’s ongoing development of a piece whose potential she feels is still unfolding. Indeed, though it originated in a museum gallery, Ring sees Mouse Auditions as applicable to a wider set of spaces and social settings, since its themes and structure are rooted in a provocative examination of some basic material and social realities.

The Marin setting, with its distinct environment (and competing wildlife), will no doubt set up its own reverberations, not least because the participants (unlike in New York) will be almost entirely strangers to Ring. But wherever it lands next, there’s something in the piercing comedy, subtle negotiation and absurd, Sisyphean optimism of a potentially endless audition — in which every applicant is already a performer in a piece about a piece that will never be made — that sure sounds close to home. *

Headlands Center for the Arts