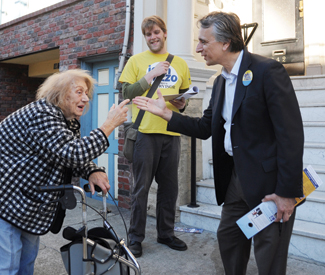 This year’s supervisorial race in District 5 — representing the Haight, Panhandle, and Western Addition, some of the most reliably progressive precincts in the city — has been frustrating for local leftists. But as the long and turbulent campaign enters its final week, some are speculating that John Rizzo, whose politics are solid and campaign lackluster, could be well-positioned to capitalize on this strange political moment.

Appointed incumbent Sup. Christina Olague has been a disappointment to some of her longtime progressive allies, although she’s now enjoying a resurgence of support on the left in the wake of her vote to reinstate Sheriff Ross Mirkarimi. Now two allies of the mayor — tech titan Ron Conway and landlord Thomas Coates — are funding a $120,000 last-minute attack on Olague.

The campaign of one-time left favorite Julian Davis lost most of its progressive supporters following his recent mishandling of accusations of bad behavior toward women (see “Julian Davis should drop out,” 10/16).

The biggest fear among progressive leaders is that London Breed, a well-funded moderate candidate being strongly supported by real estate and other powerful interests, will win the race and tip the Board of Supervisors to the right. The final leg of the campaign could be nasty battle between Breed and Olague and their supporters, who tend to see it as a two-person race at this point.

But in a divisive political climate fed by the Mirkarimi and Davis scandals and the unprecedented flood of hundreds of thousands of dollars in real estate and tech money, it’s hard to say what D5 voters will do, particularly given the unpredictably of how they will use ranked-choice voting to sort through this mess.

Running just behind these three tarnished and targeted candidates in terms of money and endorsements are Rizzo and small business person Thea Selby, who described their candidacies as “the grown-ups in the room, so there’s an opportunity there and I’m hopeful.”

Selby hasn’t held elective office and doesn’t have same name-recognition and progressive history as Rizzo, although she has one of the Guardian’s endorsements. It probably didn’t help win progressive confidence when the downtown-backed Alliance for Jobs and Sustainable Growth recently did an independent expenditure on behalf of both Selby and Breed.

And then there’s Rizzo, who has been like the tortoise in this race, quietly spending his days on the streets meeting voters. Between fundraising and public financing, Rizzo collected about $65,000 as of Oct. 20 (compared to Breed’s nearly $250,000), but he’s been smart and frugal with it and has almost $20,000 in the bank for the final stretch, more than either Olague or Davis.

But perhaps more important than money or retail politics, if indeed D5 voters continue their strongly progressive voting trends, are two key facts: Rizzo is the most clear and consistent longtime progressive activist in the race — and he’s a nice, dependable guy who lacks the oversized ego of many of this city’s leaders.

“I see consistency there and a lack of drama,” Assembly member Tom Ammiano, an early Rizzo endorser, told us. “He’s looking not like a flip-flopper, not like he owes anyone, and he doesn’t have a storied past.”

Rizzo, who was born in New York City 54 years ago, is downright boring by San Francisco standards, particularly given his long history in a local progressive movement known for producing fiery warriors like Chris Daly, shrewd strategists like Aaron Peskin, colorful commenters like Ammiano, bohemian thinkers like Matt Gonzalez, and flawed idealists like Ross Mirkarimi.

Rizzo is a soft-spoken family man who has lived in the same building on Waller Street in the Haight-Ashbury for the last 27 years. Originally, he and Christine, his wife of 25 years, rented their apartment in a tenancy-in-common building before they bought it in the early 1990s, although he’s quick to add, “In all the years we’ve owned it, we never applied for condoship.”

He supports the city’s limits on condo conversions as important to protecting working-class housing, although he said, “The focus should be on building new affordable housing.” That’s an issue Rizzo has worked on since joining the Sierra Club’s San Francisco Bay Chapter more than 20 years ago, an early advocate for broadening the chapter’s view of environmentalism.

Michelle Myers, director of the Sierra Club’s San Francisco Bay Chapter, said Rizzo brings a wealth of experience, established relationships, and shrewd judgment to his role as the group’s political chair. “We really rely on John’s ability to weigh what is politically feasible, not just what’s ideal in our minds,” she told us.

Yet that political realism shouldn’t be confused for a lack of willingness to fight for big, important goals. Rizzo has been an advocate for public power in San Francisco for many years, strategizing with then-Sup. Ammiano in 2001 to implement a community choice aggregation program, efforts that led to this year’s historic passage of the CleanPowerSF program (with a key vote of support by Olague) over the objections of Mayor Lee and some business leaders.

“CleanPowerSF was carried by John Rizzo, who has been working on that issue for 10 years,” Myers said.

Rizzo is a technology writer, working for prospering computer magazines in the 1990s “until they all went away with the dot.com bubble,” as well as books (his 14th book, Mountain Lion Server for Dummies, comes out soon).

He sees the “positives and the negatives” of the last tech boom and this one, focusing on solving problems like the Google and Genetech buses blocking traffic or Muni bus stops. “On the one hand, these people aren’t driving, but on the other hand, they’re unregulated and using our bus stops,” he said. “We need to find some solution to accommodate them. Charge them for it, but accommodate them.”

That’s typical of how Rizzo approaches issues, wanting to work with people to find solutions. As president of the City College of San Francisco Board of Trustees, Rizzo suffered the bad timing of the district having its accreditation threatened just as his supervisorial race was getting underway, but he’s steadily worked through the administrative problems that predated his tenure, starting with the criminal antics of former Chancellor Phil Day and continuing with “a management structure still in place, and it had calcified.”

Despite being on the campaign trail, Rizzo called the trustees together six times in August to deal with the accreditation problems. “We now have a plan that shows all the things the district needs to do to keep it afloat. City College is back on track.”

Eileen Hansen — a longtime progressive activist, former D8 supervisorial candidate, and former Ethics Commissioner — gave her early endorsement to Rizzo, who never really seemed to catch fire. “There hasn’t been a lot of flash and I would love for there to be more energy,” she admitted.

So, like many progressive leaders, she later offered her endorsement to Davis, believing he had the energy needed to win the race. But after Davis’ problems, Hansen withdrew that endorsement and sees Rizzo as the antidote to its problems.

“We are in such a mess in D5, and I’m hoping they will say, ‘enough already, let’s find someone who’s just good on the issues, and that’s John,” Hansen said. “As a progressive, if you look at his stands over many years, I’d be hard-pressed to find an issue I don’t agree with him on. He’s a consistent, strong progressive voice, someone you can count on who’s not aligned with some power base.”

“What some people may have viewed as his weak point may end up being his strength,” said former Board President Aaron Peskin, who endorsed Rizzo after the problems surfaced with Davis. “A calm, steady, cool, collected, dispassionate progressive may actually be the right thing for this moment.”

Sup. Malia Cohen, a likable candidate who rose from fourth place on election night to win a heated District 10 supervisorial race two years ago, is a testament to how ranked-choice voting opens up lots of new possibilities.

“Ranked choice voting defies conventional wisdom,” Peskin said. “There may be Julian Davis supporters and Christina Olague supporters and London Breed supporters who all place John Rizzo as their second.”

In fact, during our endorsement interviews and in a number of debates and campaign events, nearly every candidate in the race mentioned Rizzo as a good second choice.

Yet Rizzo doesn’t mince words when he talks about the need for reconstitute the progressive movement after the deceptions and big-money interests that brought Mayor Lee and “his fake age of civility” to power. Lee promised not to seek a full term “and he broke the deal,” Rizzo said. “And it was a public deal he broke, not some backroom deal.”

That betrayal and the money-driven politics that Lee ushered in, combined with the divisive political climate that Lee’s long effort to remove Mirkarimi from office created, has deeply damaged the city’s political system. “I think the climate is very bad It’s bad for progressives, and just bad for politics because it’s turning voters off,” Rizzo said.

He wants to find ways to empower average San Franciscans and get them engaged with helping shape the city’s future.

“We need a new strategy. We need to regroup and think about things long and hard. I think it’s not working here. We’re doing the same things and it’s not working out. The money is winning.” He doesn’t think the answers lie in continued conflict, or with any individual politicians “because people are flawed, everyone is,” Rizzo said.

Yet Rizzo’s main flaw in the rough-and-tumble world of political campaigns may be that he’s too nice, too reluctant to toot his horn or beat his chest. “That kind of style is not me. That aggressive person is not who I am,” Rizzo said. “But I think voters like that. Voters do want someone who is going to focus on policy and not themselves.”