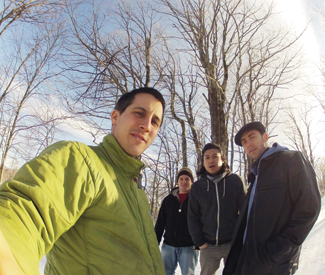 TOFU AND WHISKEY If experimental artist Nick Zammuto was pulling from a storied sample library after all those years with beloved former band the Books, he’s now building from scratch with his new band, Zammuto. The first Zammuto record sprang from a more angsty place, a fear of the unknown after the breakup of the Books. Skyping from a McDonald’s in Springfield, Mass., a humble Zammuto admits to fears about “lightning striking twice,” regarding his musical evolution.

His fears are unwarranted; the Zammuto self-titled debut (Temporary Residence, 2012) is as invigorating as it is multifaceted; mixing classic pop sensibilities with digital burps, buzzy electronics, sampled found objects, and still a more traditional band set-up than the Books, the artist has again found his own creative niche: the mad scientist family man, digging through crates of toys and creating emotional connections with the sounds he squeezes out of them. And he’s kept his humor in tact, with tracks titled “Zebra Butt,” “Groan Man, Don’t Cry,” and “FU C-3PO.”

Zammuto, the band, travels to the Independent this week (Sat/3, 9pm, $15. 628 Divisadero, SF. www.theindependentsf.com) but it’s been to SF once before. It came out west this spring to open for Explosions in the Sky at the Palace of Fine Arts. And after that show, Zammuto met some young Australian rockers. I’ll let him tell the story:

Nick Zammuto I was at the merch table, and this group of Australians comes up and buys everything on the table. I’m like, ‘you guys look like you’re in a band or something.’ And they’re like, ‘oh yeah, we’re Gotye.’ And I’m like, ‘cool, I’ve never heard of you, I’ll check it out.’ Literally, in that moment, they had the number one single in like, eight countries. I felt like a moron. Two weeks later I got a call from Wally [De Backer] to come tour with them, so we ended up playing seven shows with them. I live under a rock, I don’t have time for anything except working in my studio, and playing with my kids.

San Francisco Bay Guardian Has having children has affected your music?

NZ I have all boys, three sons, who are six, three, and one, you can’t help but live vicariously through them, because they experience life in such directness. I think it’s tuned me in to a simpler way of looking at things, and to be around that kind of innocence is inspiring. Just the sense of wonder they have is infectious.

SFBG How has your approach to songwriting shifted with Zammuto, as compared to the Books?

NZ I’ve never really been part of a band, I sort of came to that realization when we started rehearsing the [Zammuto] material. The Books was really a meta-band in a lot of ways, and at the end I was starting to think of it as a sort of glorified karaoke; we’d get up on stage and have all these electronic rhythms going on and we would just kind of play along with it. With the new project I really wanted to make something that was meant to be played live.

Key to that was finding a great drummer, and I think I found just an amazing drummer [in Sean Dixon]. Having a live time keeper on stage has been the biggest difference between the new project and the Books. And for me it’s been the most fun, to play with him, and see what he does. We really connected over this idea of polyrhythms. He helps me find these grooves that are really unusual. And I think the reason why I shied away from drums for so long is that it’s a very kind of genre-fying instrument. It’s hard to do anything out of the ordinary because it all sounds too ubiquitous. But Sean’s the kind of guy who sounds like nobody else. It’s a real balance with Sean between precision and heart.

I have [Dixon, Gene Back, and brother Mike Zammuto] up for sessions and we record things in a very loose way and then I go through those recordings later and pull out the parts that can go beyond expectation and build from those elements, rather than the sample library that the Books were drawing from.

SFBG But you’re still creating your own instruments out of found objects.

One of the first things I started doing was cutting into vinyl, cutting patterns into the circle at the end of each side of a record, and using that as a percussion. That sound sounds like clicks and pops, but if you take those impulses and put them through various environments you get amazing sounds, so playing them through PVC pipes or through filing cabinets with subwoofers installed in them you get these really strange but kind of naturalistic sounds at the same time, where you can’t put your finger immediately on what they are, and I think that’s why I’m interested in them. They have this mysterious quality.

SFBG What about the thematic elements, lyrically, on the record, it seems like it’s coming from a lot of new beginnings, new experiences, “The Shape of Things to Come” and so forth?

NZ The end of the Books was a harrowing experience, it took a very long time for it to go through its death throes. Lots of frustrations, then finally giving up and being like, ‘OK, what the hell do I do now?’ I’m asking lightning to strike twice, starting another band at this point in my life, so the lyrics are coming out of a very angsty place on this record. And I think I’m getting out of it, finally. Now that the band has come together in such an amazing way. I’m not in such a dark mood anymore [laughs].

I think I was writing about my own experiences, but in the frame of something more universal, for somebody who is frustrated out of their minds and in need of a new beginning. Just a general expression of having this need to move forward, but also going into unexplored territory.

San Francisco’s own Future Twin (soundcloud.com/futuretwin) released the second of its Summer Single series tracks last week. Angular “Sara” is tethered by a driving guitar line, and singer Jean Yaste’s caramel-coated vocals. Lyrically, it’s a testament to Yaste’s personal female heroes, and a call to action to all women to question the status quo and explore alternative experiences.

WOODKID (CANCELLED DUE TO TRAVEL CONDITIONS AFTER THE STORM)

French composer-artist Woodkid (a.k.a Yoann Lemoine) creates sounds that bloom like live-action role-playing background music. Or, video game music using entirely classical orchestration, strings, and Lemoine’s low octave, accented pipes. (You could easily picture Link chasing after Zelda during “Iron.”) Each track builds like a sassy, page-turning epic, which make his two EPs feel like brief odysseys. That’s right, he’s yet to release a full-length, but that record — The Golden Age — is coming. Though you might have seen his stylish videos for Agyness Deyn-featuring “Iron” or “Run Boy Run.” Or hell, you may know him from his other life as a music video director: Katy Perry’s “Teenage Dream,” anyone? With Pacific Air.