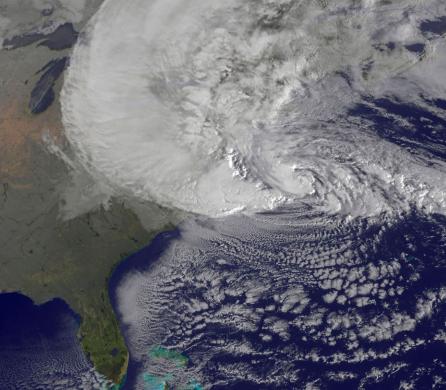 I guess it’s no surprise that most of the news media coverage of Hurricane Sandy was focused on the immediate — when you have six million people without power and transit systems paralyzed and at least 38 deaths, you deal with that stuff first. There will be plenty of time later to talk about causes and preparadness and what to do next time.

But I expected a little more mainstream coverage of the clear and obvious fact that this storm — and the many more severe storms that are likely to follow in places that aren’t used to seeing this type of weather — is the result of climate change caused by humans.

The scientists — at least, all but the looney ones — are not in denial. The oceans are warmer than they were 20 years ago, and the warm water extends farther north. Warmer oceans mean more, and stornger, hurricanes:

Scientists have long taken a similarly cautious stance, but more are starting to drop the caveat and link climate change directly to intense storms and other extreme weather events, such as the warm 2012 winter in the eastern U.S. and the frigid one in Europe at the same time.

There have been three presidential debates. Both candidates have suspended campaigning because of Sandy. Mitt Romney’s out collecting cans of food that the Red Cross doesn’t want.But at no point in this campaign has climate change been a serious issue.

Maybe people will start paying attention now. Maybe a $20 billion hit to the heavily populated East Coast areas where the heart of the nation’s banking and politics business are will wake up the White House and Congress. Because this ship has sailed — the damage already done is serious and can’t easily be repaired. And preventing serious from becoming catastrophic is now our only option, and we’re running out of time.

Most of Manhattan and Long Island is less than two feet about sea level. Unless you’re going to build massive dikes around both of them, those places are going to be worse off than south Florida in a few years. Sandy was a Category 1 when it hit the Jersey shore; in a few years, that region is going to be dealing with Category 3 and 4 storms and the flooding will be devastating.

Can we please talk about this?