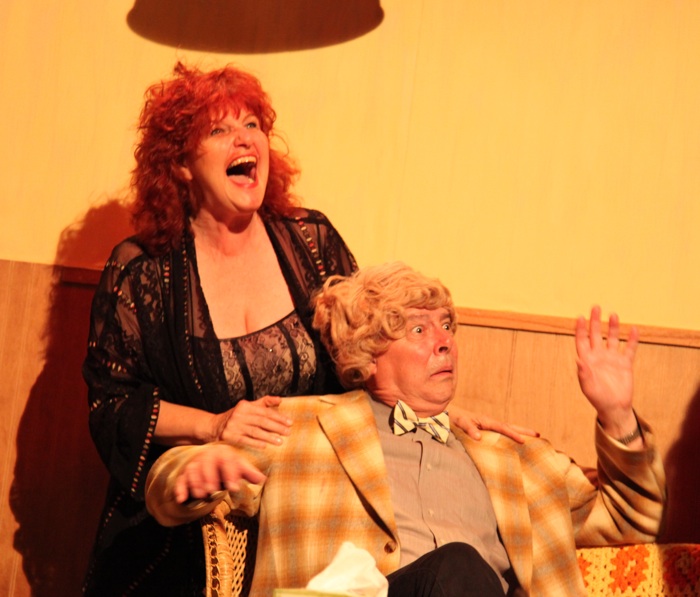 The living dead are kind of obnoxious. They’re dead, but unlike dead people you might actually want to hang out with for awhile if they happened to be around (Josephine Baker, Hunter S. Thompson) the only truly remarkable thing about them is their inability to lie down and stay put like respectable dead people do.

There they are, skulking around dark alleys and isolated cabins, focusing all of their limited decision-making abilities on trying to feast on human flesh, even though they couldn’t possibly have a working digestive system. The living dead just don’t contribute much to society, and it’s difficult to see what it is about them that we continue to find so fascinating, outside of that whole defiance of biological law thing.

For an answer, you need look no further than the Phoenix Theatre, where Virago Theatre Company’s Zombie Vixens from Hell by John Byrd takes a tired trope and injects it with a syringe of good old-fashioned Sex, Drugs, and Rock-and-Roll.

True to the title, these zombies aren’t shambling revenants in disheveled rags but rather a lusty bunch of voracious brain-munchers—clad in fishnets and wicked stilettos. Inadvertently set loose on the world by a timid, clumsy PhD student, Agnes (Kelly Rauch), who accidentally infects herself with an experimental serum and transmits the resultant “disease” to both her mother (Shelly Lynn Johnson) and her hot-to-trot best pal Tris (Kelsey Bergstrom) with a kiss, the zombie vixens are characterized by two major traits: their taste for brains and their desire for sex. Also, interestingly, only the female of the species is affected by the mysterious virus—leaving the men of the play to serve primarily as (mostly willing) zombie fodder.

Tongue-in-bloody-cheek songs such as Tris’ ode to undead emancipation “You Don’t Bang Me” and Agnes’ escape-down-a-dark-alley anthem “Paranoia” are expertly scored by the “Shameless Passion Band” (directed by David Manley) and choreographer Lisa Bush Finn throws in plenty of sex kitten slinking and a few patented “Thriller” moves, all of which the zombies attack with vigorous zeal. In fact, everything the zombies do is with vigorous zeal, and therein lies the secret of their appeal. Confidence is so sexy in a reanimated corpse. Just ask zombie fan-boys Vin (Burton Weaver) and Nat (Donald Currie), whose infatuations lead them to blissfully enabling self-sacrifice.

Speaking of enabling, in SF Theatre Pub’s production of Kirk Shimano’s “Love in the Time of Zombies,” middle-aged mad scientist Melinda (Maggie Ziomek) traps four bumbling zombie-slayers in her isolated cabin in order to feed them to her very own test subject zombie, Clara, whom she may secretly love.

The premise behind her madness is that zombies crave not human flesh but human emotion, and by “feeding” Clara the four “major” human emotions as embodied by the clueless band of four, Clara might become human again. According to Shimano, these emotions are anger, fear, lust, and regret, which probably says more about Shimano’s emotional state than that of all humanity, but regardless, watching the experiment unfold, including a very funny lesson on zombie vernacular, does give the oddience the opportunity to empathize with the unique plight of the zombiefied, who frequently come off as far more likable than the living, despite their limited vocabulary (“me want eat you fuzzy”).

And at least with zombies, you know that they want you for your mind, so really, what’s not to love?

Love in the Time of Zombies