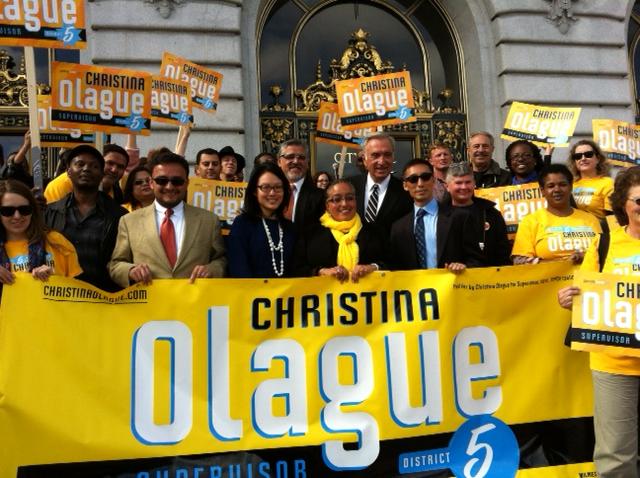 A string of prominent local progressive leaders today offered their support to Sup. Christina Olague – including former Mayor Art Agnos, who announced his endorsement of her in the District 5 supervisorial race – in a rally on the steps of City Hall.

In the process, many voiced a need to broaden and redefine progressivism as valuing independence and diversity of perspective more than just stands on specific issues, traits they said Olague embodies. But more than anything, the rally seemed aimed to consolidating progressive support around Olague as the best hope to beat moderate London Breed in one of the city’s most progressive districts.

“District 5 is often referred to as the most progressive of San Francisco’s supervisorial districts. It includes a diversity of views and opinions on how to meet the challenges all our communities face,” Agnos said. “And it takes a supervisor who know how to listen, to hear and respect those differing views, while working for a resolution that moves us forward.”

Sup. David Campos made only a veiled, indirect reference to the problems some progressives (himself among them) have had with some of Olague’s stands since she was appointed to the job by Mayor Ed Lee, but he said, “Those of us who have worked with her know what’s in her heart…She has been the independent person we always knew she would be and I’m proud to stand with her today.”

Several speakers made reference to Olague’s working class roots, her perspective as a Latina and member of the LGBT community, and her history of progressive activism in San Francisco. Cleve Jones, Gabriel Haaland, Sandra Fewer, and Sup. Eric Mar were among those there to offer support.

“It was a big give by the Mayor’s Office to appoint someone who wasn’t always going to agree with him,” said Sup. Jane Kim, but that was about the only positive reference to the Mayor’s Office, which turned on Olague after she voted to reinstate Sheriff Ross Mirkarimi, setting the stage for her return to the progressive fold.

“To be a progressive is to share an ideology that understands and believes that the best decisions for our city require the participation of all of us, no matter who we are, where we live, or how big our checkbook is,” Agnos said. “As with so many who have endorsed her, that progressive label says she is a politician who understand this fundamental truth.”

SF Rising board member Alicia Garza kicked off the rally by saying, “We are here to set the record straight that the progressive movement is alive and well in San Francisco.” Later, she praise Olague’s history as a community organizer, saying that, “She understands deeply what it means to empower communities.”

Sup. John Avalos, another supervisor who hasn’t always agreed with Olague in the last nine months and just endorsed last week, commended her for the courage it takes to assert her values instead of simply supporting the mayor who appointed her. He said Olague recognizes that, “We live in a city of extremes, with extreme differences between the haves and have-nots.”

Another new progressive endorsement, coming in the wake of one-time progressive favorite Julian Davis’ troubles, was Quintin Mecke, who said he first worked with Olague on anti-gentrification issues 13 years ago. “I trusted her work then and I trust her work today,” he said. Activist Lisa Feldstein – like Mecke, a former D5 candidate – echoed the sentiment.

“I’m here because I really trust Christina and want to fight for her,” Feldstein said. “She comes from a place of integrity and compassion.”

When Olague finally took the podium, she said, “I am humbled by the heartfelt words of my colleagues.” She also tried to help define progressivism in San Francisco, said that it “isn’t about a cult of personality.”

Instead, she said it’s about working to building people’s capacity to create an inclusive and just city. “It’s about building a movement that can weather any storm,” Olague said, closing by saying she’ll ensure “the progressive voice is always strong in District 5 and I’ll keep working to make it heard until I’m blue in the face…I am the most progressive person in the race.”