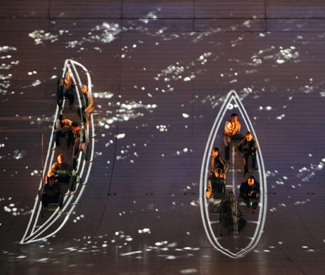 MUSIC There’s no better time for local composer Jake Heggie’s 2010 opera Moby-Dick to wash up on our shores, especially in terms of men’s fashion. Seriously — peacoats galore, henleys-and-suspenders perfection, button-up trousers, glorious galoshes, and perfectly nor’easter-tousled haircuts, not to mention a stubbly wealth of seafarin’ beards. The whole cast, outfitted by ace costume designer Jane Greenwood, might have dropped onto the stage from this fall’s All Saints Spitalfields lookbook. Forget the neoprene hoodies and double-breasted suitcoats of America’s Cup, here lies the real echo of San Francisco’s nautical past.

That echo emanates from Herman Melville’s water-logged epic of 1851, a massive compendium of American Romantic sensibility, arcane sea lore, fiery pagan-ecclesiastical poetry, and the archetypal thrashings of mad Ahab, captain of the Pequod, as he obsessively hunts his nemesis, the “great white fish” who nipped away with his left leg years ago, Moby-Dick. The book is also a full-throated exaltation of the culture of the North Atlantic whale trade, at its peak in the 1840s, and a furrowed-brow examination of humanity’s spooky morality, not to mention a rip-roaring, man’s-man adventure tale (complete enough homoerotic subtext to float a sperm whale).

Boiling all this down into an evening’s entertainment, even one as splashy and spectacle-drenched as opera can provide, is a bit like chasing a white whale itself. Fortunately, Heggie — who triumphed with 2002’s Dead Man Walking — and librettist Gene Scheer, along with a more-than-game San Francisco Opera cast and crew, dive right in.

Moby-Dick immediately grabs attention and grounds itself in the Bay Area (the production debuted at the Dallas Opera) with an eye-popping display of one of our native crafts, digital sorcery. Projection designer Eliane J. McCarthy’s gorgeous 3-D renderings of star-maps and ships’ masts engulf the curtain as Heggie’s roiling, swooning overture guides us into the story. The rest of the production and staging throughout this two-and-a-half hour work, directed by Leonard Foglia with set design by Robert Brill, is equally jaw-dropping, with mobile scrims doublings as sail, a web of rigging filling the stage, and ingenious use of a humongous hull-shaped wall.

Another of Moby-Dick‘s riveting special effects: the SF Opera chorus, in fine and lusty voice, vocally painting in the details of the story. That story contrasts the touching friendship of greenhorn whaler Ishmael and harpooner Queequeg, cannibal prince of fictional South Sea isle Kokovoko, with the contentious relationship between the driven Ahab and his first mate, Starbuck, a homesick family man and devout Quaker who sees the Devil’s work in Ahab’s doomed quest. One of the most affecting characters is Pip, the impetuous and mentally unformed ship’s mascot, whose unhinged ramblings after he’s saved from drowning serve as warped prophecy as the opera progresses.

There’s so many meaty possibilities for a composer in this story, but if you’re expecting “yo-ho-ho and a bottle of rum” performed by full orchestra you’re barking up the wrong mizzenmast. To be sure, Heggie’s cinematic, neo-Romantic instincts — he prefers the term “theatrical,” and sometimes we do drift into Les Miz territory — make hay with sea storms, crashing waves, drunken brawls, and the melancholy feel of life adrift on the ocean. (A goofy-cute waltz comes on when the ship’s tipsy crew realize they’ll just have to partner up if they want to party, one of the few funny bits.) Heggie’s white whale is a shimmering arabesque, breaching a swirl of strings and cresting horns, at one momentous climax exploding into an off-kilter samba.

The score is mostly atmospheric, however, its foreboding drama cranked up to eleven throughout, with little standout melody or tonal attenuation to help the characters’ souls drop anchor. Despite a few memorable moments of soaring vocal lines — a duet in praise of Kokovoko’s Edenic promise by Queequeg (Jonathan Lemalu, imposing) and Ishmael (Stephen Costello, cubbishly adorable), sung from neighboring masts ; Starbuck’s ode to homelife back in Nantucket (performed by wonderfully powerful baritone Morgan Smith); the occasional cryptic outbursts of Pip (spry soprano Talise Trevigne, who does a bit of magic with a tambourine) — you’ll have to cling to the singers’ voices and acting technique if you want to keep emotionally afloat.

This becomes a problem with Jay Hunter Morris in the Ahab role. Although strongly voiced and valiantly game, he didn’t connect with me as a man who was truly obsessed, yet who retained enough charisma and cunning to draw the rest of the crew into his singular madness. His role struck me more as “friends’ crazy Tea Party dad” than “scarily fascinating apocalyptic cult leader.”

This could be a wrinkle of the libretto, which retains some of the original’s poetry and blasphemy — a pagan hymn here, an anti-religion diatribe there — but strains to convey an engaging dramatic arc for the characters. (It barely registers when all is lost for the Pequod.) In its earnest bluster, this presentation of the opera also skims over Melville’s haunting metaphysics, the eerie pull of nihilistic depths, the ecstatic fog of moral derangement, that preternatural whistle in fate’s vast gale. I disembarked from the rousing Moby-Dick dazzled and exhausted, though neither questing nor blubbering.