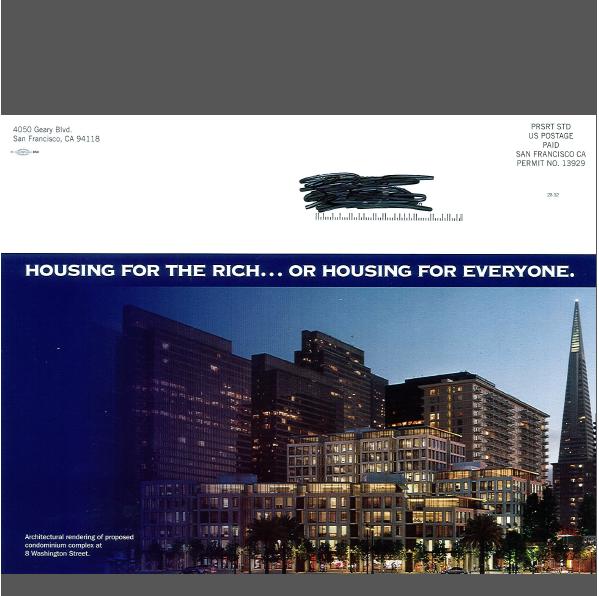 This is out-of-control shameless: David Lee — the pro-landlord, pro-downtown, pro-any-form-of-development candidate who is running against Sup. Eric Mar in District 1, is trying to hit Mar for supporting 8 Washington.

Here’s the headline: “Housing for the rich … or housing for everyone?” There’s even a picture of the proposed project. The flip side says that Mar “opposed the construction of 19,148 units of middle-class housing” while he “supported multimillion dollar condominiums on the waterfront at 8 Washington Street.”

The middle-class housing at issue here is, of course, ParkMerced, where Mar joined tenant groups in opposing a deal that could wind up costing the city thousands of rent-controlled units. It’s likely Lee would have supported that deal; fair enough.

The 8 Washington discussion is far more interesting — because David Lee was far from a critic of the project and certainly not among the large group of opponents. “He never said a word against the project,” Brad Paul, who helped organize the opposition, told me. “And the people who are backing him were in favor of it. This sounds like shameless political opportunism.”

So would David Lee have done anything different from Mar on this issue? We can’t know for sure, since Lee has announced a policy that until the election is over, he isn’t going to talk to reporters. (That alone is pretty odd, but it seems to be in synch with his really expensive campaign of misleading information that there’s no easy way to correct.)

But I know this: Among the most vocal propoponents of 8 Washington was the SF Building and Construction Trades Council, which is strongly endorsing and spending money on getting Lee elected. Same for the Alliance for Jobs and Sustainable Growth, a downtown front group. Let’s be serious: No way Lee would ever have opposed this project.

So he’s blasting his opponent for something he would have done, too — probably with more vigor and less concern for community benefits.

Meanwhile, Mar is getting screwed here. The main reason he voted for 8 Washington, as far as I can tell, was that labor leaders (and not just the Building Trades) told him it was important to them. The idea, I’m told, was that Mar would get an early, united, and strong endorsement from labor if he went along. Not pretty, and not a great recommendation for Mar — but that was the deal.

And almost immediately, the Building Trades went with Lee, stabbing in the back the guy who had crossed his progressive base for them.

UPDATE: I missed a point. In his role as a Rec-Park commissioner, Lee actually voted in favor of 8 Washington. Rec-Park had to grant an exemption to the law barring buildings from casting shadows on city parks, and 8 Washington would have shaded part of Sue Bierman Park. So he’s on the record as a supporter.