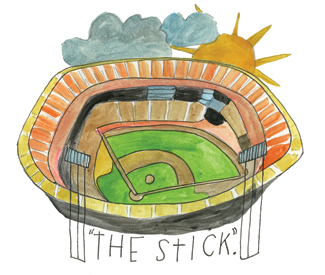 Puro San Fran: These words have inspired me to somewhere beyond my city and to someone beyond myself. Puro San Fran, I have howled into our smashed streets, into the lush jungles of Okinawa, death deserts of Saudi Arabia, the overly intellectual classrooms at U.C. Berkeley — into barrios worldwide.

Puro San Fran can be literally translated into Pure San Francisco, but what exactly is so pure about this Golden Gated city is the subject for this musing.

As an adolescent homeboy from our Mission district, I shouted Puro San Fran with anger, as a demand to combat. In different evolutions, though, St. Francis blessed me with different powers that forced me to confront profound paradoxes, within myself and my home.

Puro San Fran is more than a battle-cry; it is a meditation, a mantra that has soothed me and granted me an identity that has fueled my consciousness. I like to pride myself as a Missionero and Cortlandero before gentrification of those gritty hoods, but it is idealistic impurity to tell the tale that the Mission district is all I knew. I liked to claim those territories as if I, we, owned those streets, but those streets were only half my story.

A veteran Muni bus rider by age 11, I would graffiti tag my name and the name of our break dance crew all over every neighborhood — the Haight, Noe Valley, Soma (back when all that existed there were dull warehouses), the Sunset, Excelsior, etc. At 14 years old, we, brown skinned, would blow white angel-dust smoke halos into San Francisco’s spitting seashore at Ocean Beach. During the crack-era 1980s, we would drink and fight at rat-infested Union Square, a home for black-bearded bums who we would share our Mad-Dog 20/20 wine with. Parading our poverty on 30th street after our many 49ers Superbowl victories, we proclaimed the streets as ours, not knowing or understanding that the actual tar and cement would be “rehabilitated” (gentrified) before we would be, so that now almost all of my former San Franeros have vanished outside its borders.

Except for very brief stints in backyard cities, I did not truly explore outside of San Francisco until I was seventeen and joined the Marine Corps. Before then, I had never even heard of other major Bay Area cities called Santa Rosa, Richmond, Berkeley, or Menlo Park. My world, my life was Puro San Fran, but it was that spirit that also charged me forward, so that now I have trumpeted our unique city everywhere I have traveled. With San Fran spirit, I thrust myself into becoming a student, a writer, a professor, a father, a sinner, and a fuller human being.

San Francisco is changing, as it has always been changing, but we are at our roots Native American hippie Missionary 49er Giant locos. Thanks to our counterculture tradition, we believe in peace and diversity as an essence, yet we contradict ourselves by also being hedonistic kings and queens who wear the golden crown of capitalism on the West Coast. What goes on in Vegas may stay in Vegas, but what goes on here in San Fran becomes a permanent tattoo on our souls, and we like to believe we have them, that stuff of souls. We live in the moment trusting it is forever. Go to AT&T Park during the Giants playoffs; you will feel the forever, and you will fall in love with it. Puro San Fran, therefore, is a hopeless romantic nostalgia for something that never really existed but that always is possible. With that purity, that hopeless possibility, that profound paradox, I write and represent us all. Con Safos.