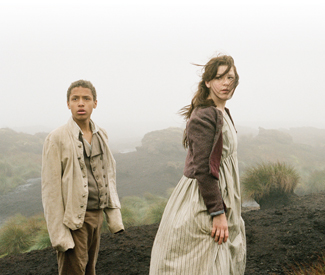 Resisting the urge to contemporize a classic, or shoot it as a traditional costume drama, Arnold takes her version in a near-experimental direction; her Heights makes Cary Fukunaga’s edgy 2011 interpretation of Jane Eyre (starring Fish Tank‘s Michael Fassbender) look tame by comparison. I spoke with Arnold about her daring spin on the Gothic classic.

San Francisco Bay Guardian You’re known as such a contemporary director, in both subject and shooting style. What made you want to take on Wuthering Heights?

Andrea Arnold It’s an interesting question, because I don’t really know. I knew at the time that it was a sort of stupid idea, but I couldn’t help it. I just had to do it. I don’t know why I became so possessed, and I still don’t really know why. It was a book that I had a fascination with — I think a lot of people do. It’s a very troubling book, a very unsettling book, a book that I don’t think is easily understood.

But I seem to like trouble. I sort of realized this about myself, that I’m always pushing myself in ways, like, I’ve got no idea how it’s going to work out, but I’m going to learn. I do think I’m not afraid of going on a journey that I don’t know where it’s going to go. With this film and this whole project, that definitely was a very unnerving and strange decision.

SFBG How did you approach adapting a classic literary work that’s been made into so many films before?

AA I didn’t think like that, or worry about that. I mean, I knew that it had been remade an awful lot of times. I think I didn’t realize how many times. But I just thought about when I went to film school we were all given the same scripts, and 20 people all made something completely different. With such rich material, you can find your own way. And I think when you get attached to something and you have to do it, you’re not sensible anyway.

I’ve always said that once I’ve got an image and an idea about making something, that it chooses you. You don’t choose it. And this was exactly the same. I just got obsessed with the idea of doing it. It wasn’t like I thought very sensibly about what had gone before. I didn’t think about it being a career move in any way.

SFBG Watching the film, it was clear that you — like Emily Brontë — had been inspired by the setting. The landscape is practically a character in the film, and the imagery includes lots of close-ups of insects and plants.

AA I think the difficulty of the location really [influenced] the film, in terms of the way everyone was feeling — it was hard to get around, and [we were] genuinely cold and fed up with the mud. First of all, I tried to find somewhere near where Emily had written it, which was the moors near Haworth, where she lived. The moors near Haworth are a bit like being in the middle of the ocean. They’ve got this undulating, endless feel to them. It’s really beautiful in that way: you feel the moors are everything and there’s nothing else in the world when you’re in the middle of it.

But it’s not so isolated around that particular area anymore. We couldn’t find anywhere that you couldn’t see things on the horizon. So we had to go further. We went to the North York Moors. And there were very few buildings, real places — I always wanted a real location — that were truly isolated. It wasn’t like I had lots of choice.

But I really like that place [where we filmed]. It was a very difficult place to work, though, no doubt. Everyone who worked on it said it’s one of the hardest things they’ve ever done, just physically. We couldn’t get vehicles there so we had to carry all of the cameras up the hills.

SFBG The film has gotten some attention for your casting choices — black actors play Heathcliff at various ages, and race is a recurring theme in the film. What motivated those decisions?

AA When I looked at the book, and all the descriptions of Heathcliff, I really felt that he wasn’t white. I was really surprised, after looking closely at how he was described, why nobody has actually done that before. I think if you’re being really faithful and truthful to the descriptions, that he’s more Asian than he is African. The fact that he’s called a gypsy, the Romany gypsies of that time would have originally come from Asia, and they’re very dark-skinned.

But after sort of investigating a bit more, I thought what really matters is that he’s different. I began to realize that Heathcliff is really Emily Brontë, and that she felt different for being female. There’s something about the book that makes me think that’s a large part of what it’s about.

SFBG The material may be a change for you, but the film is still shot like your other films, using a hand-held camera. Why do you prefer this method?

AA I didn’t think about making it in any different way than I normally do. I like hand-held cameras because if I’m working with non-actors, and there were lots of non-actors in this one, I don’t like them to feel restricted. If you put cameras on tripods then it sort of harnesses things. You have to start telling people where to stand, and hit marks. That’s something that I don’t enjoy.

Also, I didn’t see any reason why a period film shouldn’t have hand-held camera. I thought, just because we’ve seen lots of period films where they’re all very respectful, that doesn’t mean that’s how I have to be. I didn’t feel that I had to follow any sort of traditions. I just felt like I was trying to see it in my own way, and I didn’t let myself be inhibited by what had gone before. *