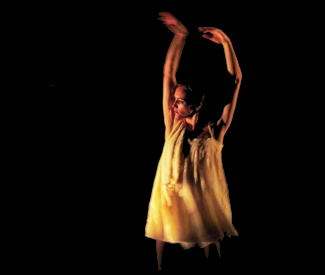 DANCE The six dancers of Kunst-Stoff’s the moment you stood still…#7 moNOs (Oct. 13-14 at the Old Mint Museum) managed to do something that had previously seemed impossible: they created a playground out of the building’s crumbling courtyard, surely the city’s most oppressive, garrison-like structure. At 50 minutes this romp of stealing, sharing, and varying movement phrases ranged from athletic to balletic, virtuosic to pedestrian. It would have worn out its ability to snare you into its universe, had it not ended with artistic director Yannis Adoniou’s free-spirited and loose-limbed solo, sweetly underscored by Bruno Augusto on keyboard. It’s easy to forget that this entrepreneurial artist is also a fine dancer.

Kunst-Stoff is not so much a company as a place where artists come together to explore affinities and differences. moment, one of a series of such encounters, is the result of this sextet having bounced back and forth ideas of the most disparate nature. Together they came up with scenes which varied between silly and somber, camp and charming. There was as much room for a passing-a-ball game — including, of course, the ubiquitous audience volunteers — as crawls and rolls on the floor and leaps across space. Letting down your hair, as Katie Gaydos did in her initial diagonal, seemed to be the order of the afternoon.

Initially unrelated ideas began to coalesce into something like a patchwork of movement, with rather surprising resilience. A dancer morphed from lying down with beating legs into somersaults and yoga poses. Later, frisky pile-ups did not really look so harmless.

For all the frantic activity in which dancers did not only pick up and vary phrases from each other, but also exchanged clothes, moment did not lack the stillness alluded to by its title. Lindsey Renee Derry, who can scream with the best of them, stood in a relevé in which her toes surely were glued to the floor. Gaydos looked abandoned on top of a “monument” while Calvin Hilpert, holding a weight aloft as if it was about to drop on his head, was hilarious with a screechy Frank Sinatra imitation. moment‘s recurring refrain had the dancers sitting on a bench. We looked at them; sometimes they looked back at us.

Elsewhere on stage this past weekend: British choreographer Russell Maliphant introduced himself at Cal Performances with the theatrically spectacular Eonnagata in 2010. Now, courtesy of San Francisco Performances, he returned with AfterLight (Oct. 13-14, Yerba Buena Center for the Arts), inspired by Russian dancer and Ballets Russes choreographer Vaslav Nijinsky. A great dancer and even greater choreographer, Nijinsky was also schizophrenic and spent the second half of his life in mental institutions. His best-known surviving work Afternoon of a Faun thoroughly shocked audiences at its premiere in 1912.

On the basis of his concept Maliphant intermittently draws you into a murky atmosphere of, perhaps, madness. But as a dance you only want to watch AfterLight once; further exposure is unlikely to reveal hidden treasures.

In Michael Hull’s lighting design, AfterLight is literally dark; at times you can hardly make out the dancers in a couple of shifting spotlights or through a thick carpet of inchoate shapes. As a single-minded expression of a restless mind this worked; in terms of a time-based art, it lacked sustaining power.

AfterLight opened with a solo for Thomasin Gülgeç, spinning as if on a turntable while his arms reached into the darkness around him. At the end we returned to that solitary figure that, instead of opening his body to an enlarging consciousness, shuts down into solitary whirls. In part two, the white-clad Silvina Cortés and Gemma Nixon’s gentle liquidity could have come from Isadora Duncan dancers.

Maliphant’s choreography has no hard edges; its performers spiraled, curled, and spun from one evanescent moment to the next. Sometimes this felt like watching smoke, except that these dancers were anchored in a deep-grounded muscularity that allowed them to connect into an endless stream of rounded shapes. In the first pas de deux, Gülgeç and Nixon’s weighty folding over each other wonderfully recalled Leon Bakst’s illustrations of Scheherazade. Though conceptually intriguing, AfterLight turned out to be a one-shot deal; whether there is more meat to this choreographer remains to be seen.