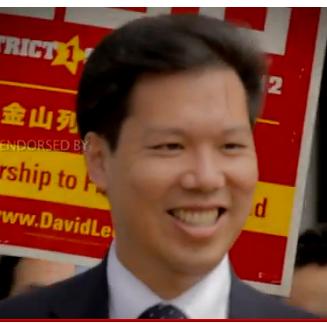 The San Francisco League of Pissed Off Voters yesterday filed a complaint with the Ethics Commission requesting an investigation into illegal coordination between Lee and the Association of Realtors, which produced an ad entitled “Send Mar Back to Mars,” in which Lee appears to have participated in the filming.

“Our concern is that Lee’s campaign has collaborated with the San Francisco Realtors Association in providing footage,” says Fabiana Ochoa, a member of the steering committee for the League.  “That’s really a violation of the law.  It’s a concern this year because we see how national super PACs have an influence on campaigns.”

Lee’s direct fundraising and the allegedly independent expenditures on his behalf this week topped $557,486 – more than any other San Francisco supervisorial campaign in history — prompting the Ethics Commission to again raise the expenditure cap on the public financing in Mar’s race. Lee and his campaign have refused to answer questions about this or other issues.

“No one has ever seen that kind of spending here in San Francisco.  It’s turned into a challenging and nasty campaign,” Ochoa said.  “It’s a small district but the game has changed.”

Progressive groups — including the League, San Francisco Tenants Union, and Harvey Milk LGBT Democratic Club — are fighting back with a rally scheduled for this Monday at 5pm outside the Realtors Association office at 301 Grove Street. They’re urging participants to bring pots and pans, reminiscent of the group of scowling children who were smeared with dirt and banging pots and pans in the video.

In a time when corporations are considered people and wealthy interests have unprecedented political influence in elections, all eyes are on the candidates and how honestly they run their campaigns.  Current San Francisco law prohibits candidates from organizing with independent expenditures like this one.

The ad, which cost $50,000 to make, mocks Mar’s efforts to remove toys from McDonald’s Happy Meals by featuring kids protesting his policies.  The glossy 3 ½ minute commercial is high-quality with Hollywood production value, leaving skeptical viewers wondering if Lee’s cameo was staged and his participation deliberate.   If it was, then Lee also violated laws that ban candidates from accepting campaign contributions exceeding $500.

The Association of Realtors clearly has an interest in David Lee, considering Mar supports tenant rights, and the Tenants Union has make its rally and campaign an effort to “save rent control” and called it a “march on the 1 percent” that is trying to buy the Board of Supervisors and remake San Francisco.

Realtors Association President Jeffery Woo would not discuss the issue when reached by phone.  In an emailed press statement to the Guardian, the Association of Realtors wrote, “ We stand by the facts, and humor, of the video we produced on the election in District 1 and do not plan to remove it from YouTube as it has achieved success in raising important issues in San Francisco.”

The Guardian also reached out to the political media expert who produced the film, Fred Davis, but he did not return our calls.

Davis, who served as chief media strategist for John McCain’s 2008 presidential campaign, is a Hollywood-based veteran of campaign marketing and has produced some of the most notorious political ads in recent history including the Demon Sheep video for Carly Fiorina’s 2010 GOP senate campaign.  He also created the highly lampooned 2010 ad featuring Delware Senate candidate Christine O’Donnell, who assured viewers that she was “not a witch.”

Judge for yourself whether Lee participated in the making of this video: