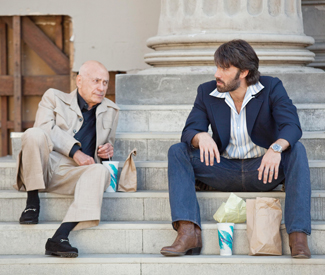 FILM A decade or so ago, Ben Affleck was drowning in Bennifer mania and starring in schlock like Daredevil (2003) and Gigli (2003). Rumors percolated that Affleck and Matt Damon hadn’t really written that Oscar-winning script for 1997’s Good Will Hunting — though Damon’s career was bearing more fruit at the time (see: 2002’s The Bourne Identity), the “Jenny From the Block” video was nauseating enough to make anyone question the authenticity of anything Affleck-associated up to that point.

But in 2012, it’s clear the guy who was able to balance being a Kevin Smith muse with getting pumped up to star in Armageddon (1998) was all along plotting the oldest show biz career trajectory in the book: he really wanted to direct. And thank goodness for that.

Argo opens with a vintage Warner Bros. logo and offers a quick history lesson via storyboards and old news footage. If you don’t know the particulars of the 1979 Iranian Revolution, you won’t be an expert after Argo, but the film does a good job of capturing America’s fearful reaction to the events that followed it — particularly the hostage crisis at the US embassy in Tehran. Argo zeroes in on the fate of six embassy staffers who managed to flee to the home of the sympathetic Canadian ambassador (Victor Garber).

Back in Washington, short-tempered CIA agents (including a top-notch Bryan Cranston) cast about for ways to rescue them. Most of the standby “exfil” tactics (give ’em fake identities as English teachers!) are out of the question given the political climate in Iran. Crazier ideas begin to surface. Could the staffers, uh, ride bikes to the Turkish border, maybe? Three hundred miles…in the winter?

Enter Tony Mendez (Affleck), exfil specialist and father to a youngster wrapped up in the era’s sci-fi craze (21st century Jedi will weep at the boy’s mint-condition toy collection). It’s while watching 1973’s Battle for the Planet of the Apes on TV that Tony comes up with what Cranston’s character calls “the best bad idea we have:” the CIA will fund a phony Canadian movie production (corny, intergalactic, and titled Argo) and pretend the six are part of the crew, visiting Iran for a few days on a location shoot. Tony will sneak in, deliver the necessary fake-ID documents, and escort them out. Neither his superiors, nor the six in hiding, have much faith in the idea. (“Is this the part where we say, ‘It’s so crazy it just might work?'” someone asks, beating the cliché to the punch.)

Argo never lets you forget that lives are at stake; we see the Ayatollah’s men scrambling to piece together the identities of the embassy workers even as Tony arrives in Tehran, where he observes a victim of mob justice swinging from a noose over a main street. Every painstakingly forged form, every bluff past a checkpoint official, the anxiety increases, to the point of being laid on a bit thick by the end.

The film has the benefit of being both timely (with US-Iran relations stormy as ever) and entertaining, and though it’s not a masterpiece, it’s Affleck’s best directorial effort to date. He’s capable with the secret-agent suspense stuff, and is careful not to make generalizations about the Iranians depicted in the film. But, appropriately enough given the source, Argo comes alive in its Hollywood scenes. As show-biz veterans who mull over Tony’s plan with a mix of Tinseltown cynicism and patriotic duty, John Goodman and Alan Arkin practically burst with in-joke brio. I could have watched an entire movie just about those two.

Argo is Affleck’s third film — the first not set in Boston, and the second that Affleck himself stars in. Though he cast his brother, Casey Affleck, in 2007’s Gone Baby Gone, he gave himself the lead in 2010’s The Town, a decision that ended up being one of the film’s weak links. (“Oh look,” my movie going companion pointed out during The Town‘s forced-soulful denouement. “He escaped to Beardlandia!”) But his turn in Argo is, refreshingly, more or less vanity-free — just one gratuitous shirtless scene! — a hopeful sign that Affleck the actor may finally be giving Affleck the director the upper hand.