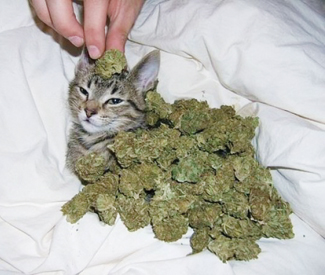 HERBWISE Hey potheads, welcome to what figures to be the last Herbwise column for the time being.

But we’ve had some good sessions together, no? Over the course of a very eventful year in marijuana, we spoke with Roseanne Barr, Black Panthers, oncologists, tax attorneys, Coral Reefer. Snoop Dogg, Fiona Apple, Pat Robertson, the president of Uruguay, and an actress from the Blair Witch Project all made our news call. They all do the weed, or support such things, and that list alone should serve as proof that cannabis has irrevocably entered the mainstream.

We went around the world to see how pot was faring in other corners. Seattle’s medical marijuana champion-DIY pop star Lisa Dank reported back from South By Southwest. I chatted with the author of medical marijuana legislation in Washington, DC, dropped in on a Berlin head shop employee, and took a walk with a small town politician up in the Marin County hills of Fairfax.

Honestly, I didn’t want to write about politics at all when we started the column. Boring! Fake! Politricks! Etcetera. But then last September, the IRS intensified its hounding of several major Bay Area dispensaries, cheating them out of perfectly reasonable tax exemptions. Then, at an October 7 press conference in Sacramento, US Attorneys let us know they were going to start being a bummer.

A year later, we’re short a whole bunch of places to get marijuana, including no less than two of the clubs I personally depended on. Hiss. Against my best intentions, current events necessitated that Herbwise focus on law and order, from time to time.

But there’s been good moments (the week I wrote Herbwise high as hell in my cubicle on Amoré, the cannabis aphrodisiac shot), just like the especially-bad moments (the week I bore the tidings that major credit card companies would no longer process sale of marijuana and that beloved local dispensary Vapor Room was closing due to threatening letters from federal agencies. That week I wrote about Lady Gaga.) I’m privileged to have been able to weigh in on a year that will surely change the future of cannabis, for better or worse.

Some words on words: I got told 800 times to not call it “pot” or “weed.” One person wrote to say “flower” was better terminology. Please don’t mix us up with the recreational users, some card carrying marijuana users told me. You’re hurting our quest to be taken seriously.

But I need my synonyms. Nah, more importantly, I think this not-mixing is the problem. Focusing the movement for increased access to cannabis on the medical marijuana industry isn’t working. Drop the pretense, I say. The notion that weed can only be prescribed by a medical professional is not just dumb, it’s also not gonna get us anywhere. The longer we stigmatize recreational users, the longer people (and by people I mean young men of color, because that’s who our racist prison system is filled with) are going to be sent to jail for a stupid reason. And less people will feel connected enough to the movement to create the kind of buzz that will eventually change public opinion. And prisonmakers and anti-drug warriors will continue to get the money that should be going to our schools and to our public library flag burning sessions where everyone is handed a pink thong to wear at the outset and ordered to chant baby-killing nursery rhymes in Spanish. Broadcast on PBS.

Obviously, I’m not saying that cannabis doesn’t have medical usages. Studies have recently emerged that suggest it stops the spread of cancer in the body, and any patient that has AIDS or another wasting, awful, strength-sapping disease can tell you that cannabis can be a literal life saver when it comes to stimulating appetite and general pain management.

But the ways in which people use cannabis are multitudinous, and the only reason it’s regulated differently than tobacco, wine, liquor, McDonald’s, and the thousand other things you can abuse out of moderation is because of government and corporate control. You smoke to relax after a hard day, you smoke to bond with friends, you smoke to have fun.

Herbwise bids you adieu. We’ll still be covering cannabis in the Guardian, of course, and like a phoenix, I’ll be rising from this spent bowl with Street Seen, a new column focusing on all the rad things happening in street art, and fashion, and other founts of alternative Bay Area culture.

Thanks for being there. Stay high.