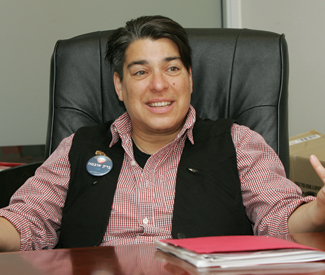 The East Bay ballot is crowded, with races for mayor, city council and school board in Berkeley and Oakland, plus a long list of ballot measures. We’re weighing in on what we see as the most important races.

This one’s simple: Progressives on the council like Parker, who’s a pretty unbiased attorney. Her challenger, Jane Brunner, is a supporter of Ignacio De La Fuente. Vote for Parker.

In some ways, this is a replay of the 2010 mayor’s race, where Rebecca Kaplan and Jean Quan, running as allies in a ranked-choice voting system, took on and beat Don Perata, the longtime powerbroker who left town soon after his defeat. This time around, it’s Kaplan, the popular incumbent, facing Ignacio De La Fuente, a Perata ally, for the one at-large council seat.

De La Fuente, who currently represents District 3, would have easily won re-election if he stuck to home. But for reasons he’s never clearly articulated, he decided to go after Kaplan. The general consensus among observers: De La Fuente wants to be mayor (he’s tried twice and failed), thinks Quan is vulnerable, and figures winning the at-large seat would give him a citywide base.

It’s a clear choice: Kaplan is one of the best elected officials in the Bay Area, a bright, progressive, practical, and hardworking council member who is full of creative ideas. De La Fuente is an old Perata Machine hack who wanted to kick out Occupy Oakland the first day, wants curfews for youth, and can’t even get his story straight on cutting the size of the Oakland Police Department.

De La Fuente is all about law and order, and he blasts Kaplan for — literally — “coddling criminals.” But actually, as the East Bay Express has reported in detail, De La Fuente, in a fit of anger at the police union, led the movement to lay off 80 cops. And the crime rate in Oakland spiked shortly afterward. Kaplan opposed that motion, and tried later to rehire many of those cops — but De La Fuente objected.

Public safety is one of the top local issues, and Kaplan not only supports community policing (and more cops) but is working on root causes, including the lack of services for people released into Oakland from state prison and county jail. She’s also a strong transit advocate who’s working on new bike lanes and a free shuttle on Broadway. She helped write the county transportation measure, B1. She richly deserves another term — and De La Fuente deserves retirement.

It would be nice to have a Berkeley person as mayor of Berkeley again.

The city’s still among the most progressive outposts in the country — and Mayor Tom Bates, for all his history as one of the leading progressive voices in the state Legislature and a key part of the city’s left-liberal political operation, has taken the city in a decidedly centrist direction. Bates these days is all about development. He’s a big supporter of the sit-lie law (hard to imagine the old Tom Bates ever supporting an anti-homeless measure). He didn’t even seek the mayoral endorsement of Berkeley Citizens Action, which he helped build, and instead hypes the Berkeley Democratic Club, which he used to fight. After ten years, we’re ready for a new Berkeley mayor.

Worthington is the voice of the left on the City Council. He’s an aggressive legislator who is never short of ideas. He’s talking about the basics (holding separate council meetings on major issues so people who want to speak don’t have to wait until midnight), to the visionary (a 21-point plan for revitalizing Telegraph Avenue). He’s against sit-lie and wants developers to offer credible community benefits agreements before they build. We’re with Worthington.

The Oakland Zoo does wonders with rescue animals; instead of bringing in creatures from the wild or from other zoos, the folks in Oakland often find ways to take in animals that have been abused or mistreated elsewhere. Measure A1 would impose a tiny ($12 a year) parcel tax to support the public zoo. Critics say the money could go for zoo expansion, but the expansion’s happening anyway. Vote yes.

Quite possibly the most important thing on the East Bay ballot, Measure B1 creates the funding for a long-term transportation plan. Almost half of the money goes for public transit and only 30 percent goes for streets and road. There’s more bicycle money than in any previous transportation plan. Every city in Alameda County supports it. Vote yes.

Not our first choice for a street improvement bond, it’s a bit of a hodgepodge that squeaked through a divided council. But the city’s deferred street maintenance is a major problem and this $30 million bond would be a modest step forward.

Berkeley has lost half its public pools in the past two years; the facilities are unusable, and it’s going to take about $20 million to refurbish and rebuild them. This bond measure would allow the city to re-open the Willard Pool and build a new Warm Water Pool — critical for seniors and people rehabbing from injuries. Vote Yes.

Berkeley often does things right, and this is a perfect example: Instead of building new facilities that it can’t afford to operate (hell, SF Recreation and Parks Department), Berkeley is asking for two things from the voters: Bond money to rebuild the municipal pools, and a special tax to provide $600,000 a year for operations. We support both.

Berkeley’s been collecting utility taxes on cell phones for some time now, but the law that allows it is based on federal language that has changed. So the city needs to make this modest change to continue collecting its existing tax.

The council districts in Berkeley were set when the city adopted district elections in 1986, with a charter amendment saying all future redistricting should conform as closely as possible to the 1986 lines. Nice idea, but the population has changed and it makes sense for the council to have more flexibility with redistricting.

It’s hard to believe that progressive Berkeley, which has spent hundreds of thousands of dollars defending similar laws in court, wants to criminalize sitting on the sidewalk. It hasn’t worked in San Francisco, it won’t work in Berkeley. Vote no.

AMENDMENTS TO THE WEST BERKELEY PLAN

Council Members Kriss Worthington, Jesse Arreguin, and Max Anderson all oppose this plan, which would open up West Berkeley to more office development — with no guarantee of community benefits. Everyone agrees the area needs updated zoning, but this is too loose.

Berkeley has needed a strong sunshine law for years; this one isn’t the greatest, but it’s not the worst, either; it would mandate better agendas (and allow citizens to petition for items to be put on the agenda) for city boards and commissions, would create a new sunshine commission with the ability to sue the city to enforce the law, and would require elected and appointed officials to make public their appointments calendars.

This sounds like a great idea — mandate that the city present certified financial audits of its obligations before issuing any more debt. In practice, it’s a way to make it harder for Berkeley to raise taxes or issue bonds. Vote no.