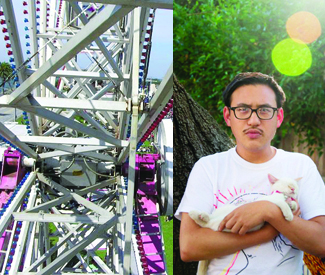 TOFU AND WHISKEY Kyle Statham, from the Oakland band Fuck, once gave Hemlock booker Anthony Bedard some laconic advice: “Music is easy, comedy is hard.” What’s interesting to me, is the comedian who brings a guitar to the stage, or the seasoned noise composer who tries his hand at stand-up; it has a boot-strapped vaudevillian, winking variety show appeal. And are you aware that cheeky, string-bean comedian Kerri Kenney-Silver, of The State and Reno 911, was once in a riot grrrl band called Cake Like? But I digress.

So, Bedard — also the drummer of Icky Boyfriends, Hank IV, and Little Queenie — has been booking the garage pop, swamp rock, surf-punk, and experimental avant-garde heavy lineups at the Hemlock (www.hemlocktavern.com) since 2002, and he established a monthly comedy night, Club Chuckles, there in 2003. It’s still running. When I started listing shows for the Guardian’s music calendar, the name Club Chuckles blew confused thought bubbles above my head. I thought perhaps there was a juggalo-esque rap-rock group that just happened to play the Hemlock monthly?

When I ask about there seeming to be an increase in underground comedic talent lately, Bedard says, “The comedy scene, not unlike the music scene, is cyclical, and right now there is a bumper crop of funny, interesting, cool, weird, up-and-coming comedians pretty much seven nights a week in San Francisco.”

One such relatively new comedian is George Chen, who is better known in the local music scene as a member of KIT, Chen Santa Maria, Common Eider King Eider, and as a booker-promoter of underground, all-ages shows. Chen also runs Zum Records, and formerly worked for Alternative Tentacles. He’s everywhere. And one night this summer, he sent out a Facebook invite to his music fans, saying he and Kevin O’Shea would be hosting an eclectic live comedy night in the basement of Lost Weekend Video.

That show was electric, the room was buzzing and packed with people who didn’t seem like the comedy club types. And many of the comedians (12 in all, I believe? It went on so long that there was an intermission) riffed on San Francisco, LA, and what could best be described as hipster nonsense. By the end of the night, my cheeks hurt from laughing so hearty at the likes of Chen, Chris Garcia, Jesse Elias, and Jessica Sele.

That Lost Weekend night is now one of Chen’s frequent co-hosting gigs — Cynic Cave takes place every second Saturday — along with Talkies, a multimedia comedic variety show he puts together monthly at ATA (www.atasite.org) with Anna Seregina.

So how did he get here? From long-standing musician/musicians-ally, to comedy club host?

“It’s a lot of reboots with me. I’m a big rebooter. I’m a big control-alt-delete guy,” he says, smiling, sitting in Alamo Square park after we make our way from Rare Device curiosities shop on Divisadero, where his sister Yvonne has permanent pop-up shop Little Otsu; he also infrequently contributes graphics and moral support to that endeavor. He has a slight lisp and an honest yet sarcastic demeanor that’s incredibly endearing.

Chen, who’s in his 30s and grew up in San Jose, considers himself a late bloomer when it comes to comedy. But he’s been expressing himself artistically, in other manners, since high school, when he and his sister started the Zum fanzine, and later the record label. Now he has the Zum podcast, which was formerly music mixes, and now features interviews with musicians and comedians.

For the past few years, and especially since he started doing open-mics in late 2011, he’s been focusing mainly on comedy, with music gigs here and there.

“My entire music career was sort of an elaborate failure. It was sort of an abrasive, deliberate failure in some ways. I think it was a very defeatist attitude about what I was doing, like ‘oh, this isn’t going to be popular. This is just going to be super cult,'” he says in a typically self-effacing manner.

When we first start talking, he seems somewhat hesitant to link his musical past with his comedy present, but he keeps laying out all these perfect examples.

He was in a hardcore band called Boxleitner in the early Aughts with his friend Gabriel Mindel Saloman of Yellow Swans that he says was initially a joke band.

“I thought of it as a parody of a hardcore band at first,” Chen says. “It’s like a very sincere joke band, if that makes sense?” I mention the Locust as another example, and he counters, “but they’re such good musicians.”

Later, he just spells it out: “this is why I can say my comedy career started in music; I also did a cover band in the late ’90s …It was an all-Chinese cover band of the Northwest punk band Lync, so we were called Chync, and it was very odd that you had a band of four Chinese-American dudes that were all into this punk band hard enough that we knew all the songs.”

This week, Chen will be doing some free stand-up outside with more than a dozen other comics during the Ha!ccupy Berkeley event at Berkeley’s Sunday Streets (Sun/14, 11am-4pm, Shattuck Avenue from Hast to Rose, Berk., www.sundaystreetsberkeley.com).

Also, Chen’s monthly Cynic Cave night happens to fall during the first ever SF Comedy and Burrito Festival (www.sfcomedyandburritofestival.com), so it got swept into the lineup of that brand new fest. The Comedy and Burrito fest deal is this: more than a hundred comics will perform at six venues throughout the Mission over a three day period, Thu/11-Sat/13. Each ticket purchase comes with coupons for free burritos from nearby taquerias. Another great mashup of ideas, this time hopefully topped with hot sauce.

And lest we forget, there’s another, much bigger fest in San Francisco this weekend, as festival season continues: Treasure Island Music Festival (Sat/13-Sun/14, noon, single day $75; two-day, $129.50. www.lineup.treasureislandfestival.com). This year, I’m most curious about luminous Beth Ditto’s Gossip, to see how they work this glossy new dance-pop sound live, Grimes, to hear if her tiny voice can carry, and Public Enemy, because, it’s Public Enemy. There’s also M83, Joanna Newsom, and Divine Fits. Also, Sunday’s headliners the xx just released shimmering new LP, Coexist, which should create a sexy, foggy atmosphere. And then there’s Saturday’s pop culture regurgitater, Girl Talk, if you’re in to that sort of thing. Though the best part about Treasure Island — besides the outstanding views — is the lack of set-time conflicts.

This week, local baroque pop trio Il Gato released Tongues and Teeth (self-released), a folkier follow-up to last year’s All Those Slippery Things EP, and 2010’s All These Slippery Things LP. “The main themes are regarding the truth we hold inside us — from our bodies internal wisdom, to our intuition, to our patterns and rituals — and the beauty and struggle of being able to both think and feel,” says spiritual singer Daimian Holiday Scott.

With Immanu El, Wolf and Crow

The best and biggest surprise from local garage rock band Sic Alps on its newest self-titled full-length (Drag City, Sept. 18) was the inclusion of a string section. It adds a sparkly additional layer to an already textured and loopy blanket, er, release. The band’s fifth LP is dense, packed with strings, harmonies, and stoney psych riffs, whimsically weaving between pop and esoteric noise. With Thee Oh Sees, Sonny and the Sunsets, the Mallard.