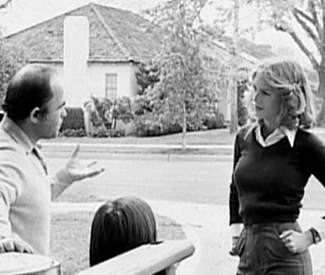 FILM/LIT Any horror fan can tell you that John Carpenter directed and co-wrote 1978’s Halloween. But it would require a slightly more credits-obsessed moviegoer to recognize the name of behind-the-scenes maestro Irwin Yablans.

In addition to being Halloween‘s producer, Yablans was also responsible for cult classics like Tourist Trap (1979), Roller Boogie (1979), and Hell Night (1981). His new autobiography, The Man Who Created Halloween: How a Bit of Desperation and Inspiration Gave Birth to the Movie That Changed Hollywood (self-published, 259 pp., $16.95), traces his path from Brooklyn childhood to Hollywood player. Along the way, he served in the army, met the love of his life, feuded with his brother (fellow film producer Frank Yablans), and — on a flight from London to Los Angeles — had a brilliant brainwave about babysitters being stalked by a killer on the scariest night of the year. I spoke with Yablans, who turned 78 this year, over the phone from Southern California.

San Francisco Bay Guardian What inspired you to write a memoir?

Irwin Yablans I kind of kept quiet about all this stuff through the years because I was only involved in the first three [Halloween films]. I was really not able to gauge the public’s insatiable appetite for Michael Myers! And I got tired of it after awhile. I wanted to do other things. But I came back into the picture because there was a lot of misinformation and revisionist history floating around, and I thought it was time I talked about it. Then, I decided to write a book about my life.

And Halloween is going out into 1,000 theaters on Halloween this year — that’s amazing! When I came up with the little idea on an airplane 35 years ago, little did I know. [Laughs.] There’s a lesson to be learned from that: never underestimate the possibilities of a good idea. Don’t ever assume that because you thought of it, it might not be good. You have to believe in yourself.

[Pauses.] Before I go any further, I have to make a confession: I am a Giants fan. And I have been since 1947, because I was a Giants fan in New York. I was at the Polo Grounds in 1951 and watched Bobby Thomson hit that home run — in case you don’t know what that is, it’s the most famous moment in baseball history. I still watch the Giants every day. And I’ll tell you, they look pretty good this year!

SFBG Why did you decide to go the self-publishing route?

IY Well, I’d never written a book before. I’d always done a little writing for the movies, but about seven or eight years ago I thought I’d sit down with my computer and peck away. The first word I wrote was “cockroaches.” [Laughs.] I wanted to write for my family — I thought I’d leave behind some musings about my life that might be interesting for my kids and my grandchildren. About 50 or 60 pages in, I showed it to some people I respect and they said, “You ought to think about publishing this.”

When I got close to the end, I submitted it to a couple of publishers. I’d never been part of that world before — [and I realized it] was just like how I got into my independent film company. I found a publisher who wanted to publish it, but I found out that if I went with them, not only would they get a large portion of the receipts, but they don’t put any money up, or do any publicity or advertising.

So I said to myself, “Why do I need them?” [I found] CreateSpace on the internet, and I’ve had the most amazing experience. Independence is sort of in my blood. I like doing things myself, [even] my own public relations. You read in the book why we chose Jamie Lee Curtis [for Halloween] — when I met Jamie, I knew she was a fine actress, but I had this vision of getting a photo of her mother, Janet Leigh, and putting Jamie in a similar pose, and submitting it to AP and UPI. We got worldwide publication of that. And that’s the kind of thing I did all the way through with Halloween. You just have to take every opportunity to publicize the picture. Of course, John Carpenter made a very good movie.

SFBG I have to ask about Roller Boogie. It’s a midnight-movie favorite in San Francisco.

IY No kidding! [Laughs.] You know what’s great about that movie? The music! Earth, Wind, and Fire … it’s just a delightful little movie. Just great fun. I think I had more fun making that movie than any other movie I made, because it was so uplifting and so bright — I was on roller skates with my whole family during the shoot. I love the “Boogie Wonderland” number, and Linda Blair was such a charmer.

I tell you, the ’70s and ’80s were a lot of fun for me. I was so busy, making movies, distributing movies, and running all over the world. It was a great experience. I really loved every moment of it.