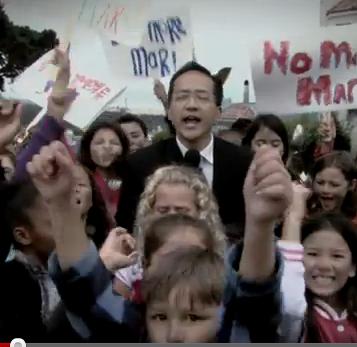 Gee, this ad that’s up on You Tube, apparently paid for the the San Francisco Association of Realtors, is creepy, strange and a bit homophobic.

It starts with a bunch of kids chanting about sending “Eric Mar back to Mars” — huh? — where, presumably, there are still happy meals with toys in them, because I can’t figure out why else all these children would be doing a political attack ad. Creepy element number one.

Then there’s a fake news announcer saying that “thousands of kids” are angry at Mar, when I saw maybe a dozen in the video — and they’re mad because they “are being bused long distances to schools they don’t want to attend.” (Creepy element number two — busing is a racial code word, even these days — and Mar, as a member of the Board of Supervisors, has nothing at all to do with the city’s school assigment policy.

Then we go to clips from the Daily Show making fun of Mar’s happy meal ban (including a superimposed legend “embattled Supervisor Eric Mar.”) Creepy element number three — why is he “embattled?” Only because the realtors don’t want a pro-tenant vote on the board.

After that it gets truly odd: The voice-over announces that Mar is famous “for suggesting that his meetings be held in the the hot tub of a local YMCA” — while a photo shows three apparently naked men cozying up around a big flume of steam. Ah — Mar is linked to a steamy male bath scene! Eeew.

“Our kids are right,” the ad says at the end. But does anyone think those (very) young children spontaneously took to the streets to complain about a member of the Board of Supervisors? Seriously — some parents clearly rounded up their kids and gave them pots and pans to bang on and created a totally false an pretty outrageous political hit piece.

Oh, and at the end, the ad hypes David Lee — and again claims that “neighborhood schools” are a part of his platform. Fine, be ignorant: David Lee isn’t running for School Board.

I can’t believe the Association of Realtors really endorses this stuff. I’ve called over there to ask about it, but haven’t heard back.

Check it out. Am I crazy, or is this some ugly shit?