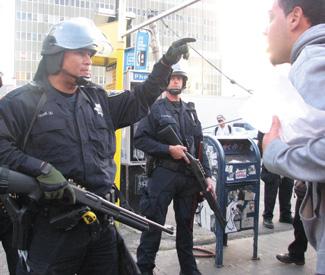 The Berkeley Police Department is undergoing some major policy changes after mounting pressure from the community to enact reforms, with new limits on its participation with other law enforcement agencies.

“There will be some extra reporting standards required, but procedures have been put in place for us to handle these new requirements,” BPD’s Public Information Officer Jennifer Coats told us, although she did not provide details on how they will be implemented. “This will not affect the high level of service the Berkeley Police Department continues to provide the community.”

Sparked by overzealous police responses to the Occupy movement in neighboring Oakland and UC Berkeley and by the issue of local police agencies working with the FBI to spy on law-abiding citizens, community groups in Berkeley urged city officials to revise policies regarding surveillance, intelligence activities, and police mutual aide.

Leading the charge was the Coalition for a Safe Berkeley and the ACLU of Northern California.  Both groups attended the Sept. 18th Berkeley City Council meeting where the council voted to modify the city’s policing procedures.

Berkeley police will no longer respond immediately and automatically to mutual aid requests from other police agencies. “The policy change that the council approved said that in a case in which there is not serious or violent crime or destruction of property, that our police will seriously evaluate whether or not to respond,” says Councilmember Jesse Arreguin.  “We won’t automatically respond in cases of civil disobedience or peaceful protest.”

Mutual aid agreements were suspended last year while the city adjusted its policies.

“The Berkeley Police Department has a strong working relationship with other police departments,” writes Coats via email. “We are able to review the need for services on a case by case basis and we look forward to continuing to work closely with other agencies.”

Other revisions include the end of surveillance and intelligence gathering of residents who participate in political activity or express First Amendment rights. Police must also have at least reasonable suspicion in order to submit a Suspicious Activity Report, which will then be reviewed by the City Manager for approval before being made available to other police agencies.

The council postponed a decision on the issue of immigration jail detainers after the ACLU of Northern California expressed its concerns with the proposed policy. The changes come after a decade of police agencies nationwide upping their law enforcement efforts, particularly in border and coastal states like California where local police often work with federal immigration and customs officers.

“After 9/11, there were a lot of agencies reorganized under the Department of Homeland Security and they all started collaborating in ways they hadn’t before,” says Nadia Kayyali of the Bill of Rights Defense Committee, which consulted with the Coalition for a Safe Berkeley.  “Federal and local collaborations are extending across the country and I have yet to see strong evidence that what they’re doing is making us any safer.”

It was almost one year ago that Occupy Oakland made international headlines as clashes between police and protesters turned violent.  The Oct. 25 melee pit police officers from Oakland, Berkeley, and San Francisco against protesters occupying Frank Ogawa Plaza, resulting in serious injuries to protesters.  The mutual aid deployed from Berkeley left many residents livid after watching their police officers assist in using force against peaceful protesters.

“If you’re involved in something that hurts the rights and security of protesters in a public place, it raises questions of complicity.  We don’t want our police to be used to halt civil liberties,” says George Lippman of the Berkeley Peace and Justice Commission, which was involved in pushing the reforms. “There should be more oversight given to these types of activities of mutual aid when there are First Amendment activities going on.”

Lippman sees increased law enforcement as a growing trend to militarize local communities nationwide, and he points to the armored tank that Berkeley police almost acquired earlier this year as an example. The City Council blocked that effort and it remains unclear why exactly BPD wanted such a bellicose piece of equipment.

“Fear is always a great substitute for rational thought in American politics,” says Lippman. “It’s also the benefit of those who profit from warfare to have something to base their weapon sales on.”

San Francisco has also taken steps to limit law enforcement practices. In May, the city implemented legislation that will force police officers collaborating with the FBI to adhere to privacy rights as stated in local and state laws.  Although hailed as a step in the right direction, that legislation was watered down after an earlier version was vetoed by Mayor Ed Lee.