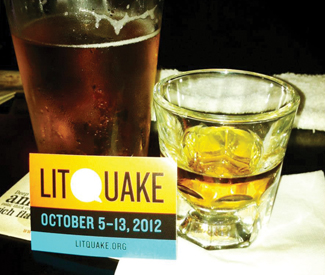 LIT What do you get when you bring together a horde of ravenous bibliophiles in a city that’s known for the possibility of a future catastrophic event? No, not the zombie-nerd apocalypse: Litquake, the largest annual independent literary festival on the West Coast. This year’s nine-day festival runs from Fri/5 through Sat/13, ending with Lit Crawl, the infamous booklovers pub-crawl that words up the Mission. The festival’s venues are as diverse as its writers, ranging from theaters, coffee houses, bars to a barbershop, a bee-keeping supply store, even a parklet. The jam-packed program is expected to bring even more attendees than last year (a whopping 16,581), and features 850 authors in 163 events including hundreds of readings and a multitudinous array of panels and cross-media events.

Originally dubbed Litstock, the festival was conjured up by Jane Ganahl and Jack Boulware at the Edinburgh Castle pub in San Francisco, a watering hole where local authors had been doing readings of their work. Ganahl and Boulware’s idea was simple: get a bunch of writers together to read their work in Golden Gate Park, and see what happens. With the help of Phil Bronstein, then editor of the San Francisco Examiner, they got $300 for a sound system, and on July 16, 1999, Litstock was born. Twenty-five writers read from their work, and to the surprise of Ganahl and Boulware, 300 people came to hear them. In 2002, the festival acquired its new, quintessentially San Francisco moniker, Litquake, and has been growing exponentially — more than 3,650 authors have presented to more than 83,500 people.

(About this year’s installment, Boulware tells the Guardian, “”This year, the festival feels like the programming has more depth than in previous years. We’re including more events at museums, more events outside the city, in particular the Berkeley Ramble, more tributes to noteworthy authors — Lenore Kandel, Woody Guthrie, and Juan Rulfo — and much more diversity in our expanded Lit Crawl schedule. We’re overjoyed to help cement the Bay Area’s rightful place on the national and international literary map.”)

As the story goes, the renaming of the festival in 2002 was partly inspired by an article in USA Today reporting that San Franciscans spend more money on books and alcohol than the residents of any other major city in the nation, according to the Bureau of Labor Statistics. Added to the festival in 2004, Lit Crawl has becoming the living, breathing embodiment of San Francisco’s happy marriage of books and booze — more than 6000 scribes and fans take part in venues in the Mission. San Francisco’s Lit Crawl (this year on Sat/13) has been so successful that there are now Lit Crawls in New York, Austin, Brooklyn and, soon, Seattle.

As neighborhoods go, the Mission is the perfect setting for the event, given its noteworthy independent bookstores and Dave Eggers’s brainchild, 826 Valencia. Like North Beach and the Haight, the city’s former literary hotspots, the Mission has an inherited bohemian spirit (some would call it Beat) that gives life to the idea of literary community.

This year’s Liquake roster of readers is a hefty one, spanning various genres and including such notable participants as Christopher Coake and Daniel Alarcón, both among Granta’s Best of Young American Novelists, along with local legends like US Poet Laureate Robert Hass and poet D.A. Powell. A bound-to-be-popular panel featuring cartoonist Daniel Clowes and Eggers himself will surely to draw a crowd, as the two discuss everything from the creative process to their favorite comics, books, and movies.

And for history buffs, there will be panels on little-known and formerly censored poetry of Beat poet Kandel and a tribute to Jane Austen featuring Karen Joy Fowler, author of bestseller book The Jane Austen Book Club.

It’s a fitting testament to San Francisco’s rich intellectual heritage that, in a city known for its ballooning tech industry (the oft-feared culprit behind literature’s “imminent demise”), San Franciscans’ literary love affair shows no signs of waning. Our lust for books still causes the city to tremble.