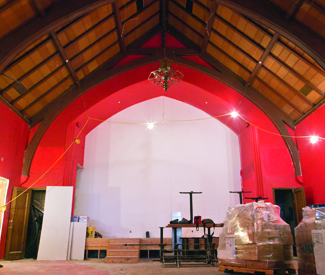 Tofu and Whiskey There are loud grinding noises and those cinematic electric sparks shooting from a machine below a church pew-like balcony. It’s musky and filled with dark bordello wood. The arched main room, the one you see when you walk in the front door of 777 Valencia Street and turn a quick corner, is outlined in bright, bloody red, and there’s a stage.

Despite this transitional state a few weeks back, this stage at brand new Mission venue, Preservation Hall West at the Chapel — named after the jazzy New Orleans venue that inspired it — will hold star-powered spillover from Hardly Strictly Bluegrass (www.hardlystrictlybluegrass.com) this week, beginning Thu/4; the fest itself is Fri/5 through Sun/7. The Preservation Hall Jazz Band of New Orleans will perform each night of the long weekend with double-dipping special guests including Elvis Costello, Robert Earl Keen, Justin Townes Earl, and Steve Earle. Maybe this means we’ll see a bespectacled Costello riding a bicycle from Golden Gate Park to the Mission, with a guitar slung on his back? One can dream.

Back to reality: “There’s no shame in construction,” said Tracey Buck of Slim’s, who, along with Britt Govea of (((folkYEAH!))) and certainly others in the future, will be doing consulting and programming at the new all-ages venue. The building, now owned by Jack Knowles, was built in 1914, formerly housed the New College, and before that was a mortuary — which gives it a sort of macabre back story. The idea for the Chapel came from Knowles’ friend Ben Jaffe, creative director for the beloved New Orleans venue, Preservation Hall, and leader of the Preservation Hall Jazz Band.

In early 2013, the West Coast sister venue will have a full restaurant attached serving fare with elements of New Orleans cuisine. But for now, there will just be concerts, including the aforementioned HSB-linked shows and upcoming visits from the likes of Woods, White Fence, and Here We Go Magic — but not to worry, the Chapel does have its liquor license now, and the bar should be ready to serve.

I pushed for fears about the venuenot being ready in time for its rapidly approaching opening date, anxiety about the relatively short distance between that morning two weeks back and the first show this week, but got back little more than nervous laughter. “It’s crunch time, but everyone knows what needs to be done,” said Buck, diplomatically.

It’s no surprise. First of all, if you live in the neighborhood, or have been near it recently, you’ve undoubtedly poked your head in and have seen what I saw — constant work. Secondly, as rabid HGTVers know, programs like Love It Or List It and their ilk show designers and construction workers whipping out brand new pads in a matter of weeks. Buck even referenced the show Restaurant: Impossible, where they quickly turn around a doomed eatery. So, it can be done.

There was also some less literal rebuilding at the actual Hardly Strictly Bluegrass festival in 2012. After the death late last year of the fest’s founder, head cheerleader, and billionaire backer, Warren Hellman, the crew had some personal reconstruction to work on.

Buck has been working the festival since it began 12 years back, and felt the loss personally. “It’s been tough, and I realize it more and more every day. But his spirit is there.”

Sheri Sternberg, technical director for the Hardly Strictly Bluegrass festival, also ruminated on Hellman’s passing, “There was something really great about having our first meeting with Warren each year…how excited he got about all the bands. If it was up to him, we would keep adding stages and days.”

The lineup this year is interesting, it’s a bit smaller — no more Thursday shows — but heavy on seriously disparate musicians such as Dwight Yoakam and Jenny Lewis and actor-bluegrass enthusiast John Reilly, and Cowboy Junkies, along with Giant Giant Sand (Howe Gelb’s hour-long opera) and a handful of younger acts such as Beachwood Sparks, the Civil Wars, and the Head and the Heart, along with the fest pillars like Emmylou Harris, Guy Clark, and Steve Earle. Sternberg says Gary West is gathering a “greatest hits” of the festival to pay tribute to Hellman, Earl Scruggs, and Doc Watson, all of whom died last year, in a set called “The Founding Fathers.” It’s kind of the theme of this year as well. That tribute will likely be kicked off with the Preservation Hall Jazz Band doing a second line.

I asked Buck if it was hard to nab artists from Hardly Strictly to play an unknown, nearly unfinished venue like the Chapel and she claims it was the opposite: “They were really eager. I think it’s just exciting to finally have a venue opening — rather than closing.”

While bone-rattling noise has its very important place in my heart, there’s something to be said for warm cooing and surreal lyrics. For that, you can crawl up the grand staircase of the Swedish American and opera clap for English folk plucker Laura Marling. Her honest lilt and fluttering riffs have gained her comparisons to Joni Mitchell, but she has a distinctly British affect to these American ears. She played Grace Cathedral earlier this year and returns this week on her “Working Holiday Tour” to play from her most recent album A Creature I Don’t Know (Ribbon Music, 2011) at this far more intimate venue.

Best band name of the week goes to members of San Francisco’s Butt Problems: Fuck You Cop, You Fucking Cop opens for Street Justice at the Knockout.

Here’s to Recess Records — the independent punk label formed in 1989 and thriving in the current web-and-micro record shop musical landscape — and its friendly kingpin, Todd Congelliere. The snot-nosed singer-guitarist-label owner, who also fronted F.Y.P. and Underground Railroad to Candyland, returned this year to his early Aughts punk outfit, Toys That Kill. Todd and the Toys That Kill gang released its first new album in six years — the energetic and well-received Fambly 42 (Recess Records, 2012) — earlier this summer and have sparingly journeyed up the coast from their mythic Sunken City homebase of San Pedro, Calif. to play it live. Fambly 42 might have taken so long to get here because Todd (jokingly?) told me that good bands only put out three albums then quit to form new ones. With Pins of Light, Elephant Rifle.