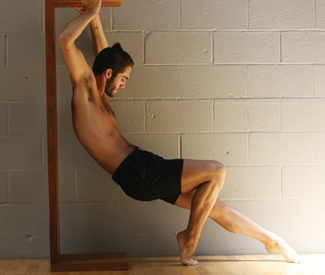 DANCE Speaking from a practical perspective, Zhukov Dance Theatre is more of a pick-up company than what is commonly understood as an existing ensemble. Of the seven dancers currently performing, only Martyn Garside and Doug Baum have danced with Zhukov before. Two of them, Madison Hoke and Andrea Thomson, are still students at the San Francisco Conservatory of Dance. Yet the most remarkable aspect of the loosely woven, 65-minute Coin/c/dance (Sept. 27-29 at Z Space) was its sense of coming out of one mold.

These dancers looked like a company that has been working together longer than the approximately two months it took to create a piece that grew some wings as the evening went on. Their ballet training shone through every moment, but the way it was integrated into liquid torsos and abundant floor work imbued the performers with a sense of ease and airiness about themselves.

Yet Yuri Zhukov is not a casual choreographer; he thrives on concept-driven dance. This year it had something to do with coincidence’s role in our lives. That’s about as common and yet cumbersome an idea as trying to mine cloud formations or traffic patterns. Dancer bios on the company’s Facebook page were supposed to provide an inkling to the work’s impetus, but if it was there, I didn’t see it.

But, of course, it’s not the material but artists’ handling of it that determines a work’s quality. And here, the dancers stepped up to the challenge. Their formation didn’t restrict but rather expanded their expressive potential. They were flexible, open, and sensitive participants in a process that depended on improvisation — not onstage but in rehearsal. The sections existed side-by-side on an equal level, streaming into each other, not coincidentally but through what looked like carefully made choices, probably Zhukov’s. The choreographer also signed on for the eclectic musical choices.

Rather conventionally Coin/c/dance contrasted group with duet work. That should have suggested a trajectory — and dance is a time-based art — but again, I didn’t see it. Despite much freshness, some mystery, and some humor, the work made me want more emotional coherence. If there was logic to Coin/c/dance’s structure, it was very diffuse. The piece opened in silence with the petite Hoke in a shiny gray dress (costumes were by Zhukov and Jarred Garza) stepping down stage. Other dancers lined up behind her, suggesting a sense of quasi-static order, but then, when Garside’s flipped his arm, they bunched up into a tight group. They churned across the stage in serpentines, held together by some centrifugal force. As it loosened they fell by the wayside, ignored or helped up. It’s a motive that would reoccur.

In another section the dancers piled helter-skelter on the floor. Hoke burrowed her way in. Not exactly a surprise, she was pushed up from the center. More surprising was the section’s dissolution into a daisy chain of hand holding.

The work’s funniest moment came courtesy of a Hong Kong document, read aloud on film, that spelled out rules for dog owners. Straight-faced and in regulation black, the dancers subdivided into two or three groups, putting themselves through perfectly synchronized unison patterns — all to the rhythm of the announcer’s speech.

The duos set in relief allowed the dancers’ lovely training and ability to go beyond what they already knew. One of them paired Doug Baum and Garside, both liquid performers of a similar build, a soft athleticism, and beautiful articulation. As Baum rolled a huge spotlight along the floor, Garside reached, recoiled, and folded himself — maybe narcissistically, maybe in defense. Then he grabbed the light for a role reversal.

Nick Korkos, a dancer with extraordinarily long legs that he can stretch along the floor like some elegant train or fold into whipping pirouettes, paired a volatile, quicksilver-but-powerhouse Annick Schadeck. They wearily twisted and twirled around each other; when she crawled up his back it looked like an invasion.

The most prominent, spacious duet belonged to Thomson and Jeremy Bannon-Neches. A very young dancer, resplendent in the evening’s one spot of color — a bright red dress — Thomson held her own admirably against a smoldering Jeremy Bannon-Neches. No wonder their most prominent gesture involved arms stretched straight ahead. They allowed for connecting, but also keeping apart.