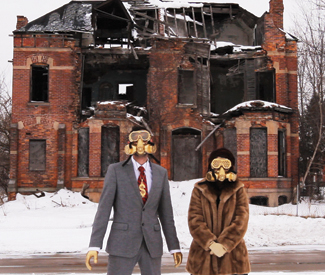 FILM “I feel like I was maybe here, a while back. Or I’m older than I really am, and I just have this young body and spirit and mind — but I have a memory of this place when it was bangin’,” says video blogger Crystal Starr in new doc Detropia, gazing at the Detroit skyline from an abandoned building somewhere on the West Side, puffing a little joint.

Most people who grew up in the Rust Belt, kicking around the ghostly landscape of industrial decay, know this feeling intimately. But for those of us from Detroit, once-glamorous capital of American manufacturing and symbol of the triumph of capitalism, the sentiment is especially keen. We feel like we were born with the history of the city in our bones.

Another common feeling is that of dread upon hearing that yet another arty documentary (or brow-furrowing article, or glossy photo book) about the Motor City’s current economic state is coming down the pipe. The narrative arc of such things is usually this: remember Motown? Cars were amazing. Then there were scary riots, probably out of thin air. Then the jobs left. Isn’t Detroit sad now? Look how spooky this abandoned train station from the 1930s is! America is over. Wait! Some hipsters are starting a farm downtown! There may be hope after all. But who knows?

Detropia, directed by Heidi Ewing, who grew up near Detroit, and Rachel Grady, doesn’t exactly deconstruct that crusty storyline (non-spoiler alert: the hipster-farmers become performance artists). But this important and beautiful film shows how much more of the Detroit tale takes on meaning and shape when told through the voices of people who actually live there, with a cinematic eye that doesn’t shy away from reality, even as it bends it to narrative ends. (In Detropia, even a plastic-wrapped head of iceberg lettuce is a metaphor.)

Those voices include Starr and several others, including George MacGregor, president of the United Auto Workers Local 22, who is filmed during the painful closure of an American Axle plant; Tommy Stephens, slight-but-wise owner of an old school bar-restaurant; and a jaunty band of scrap-metal salvagers who should become the subject of a documentary in their own right.

Yes, the film has a somber tone and melancholy style. Grim statistics — “in the last 10 years, Michigan has lost 50 percent of its manufacturing jobs;” “six million workers lost their jobs” — are dutifully displayed. Current Detroit industries, like casino gambling or techno and hip-hop music, and their effect on the economy are left unexamined. And yes, the ruins of Detroit look gorgeous. (One thing Detropia gets spot-on is how the pervasively humid, green-gray light of the coastal city echoes off peeled paint and crumbling yellow-red brick.)

But when you hear MacGregor at his desk gently telling an elderly retiree on speakerphone that she has no vision insurance — it was one of the union compromises of the auto industry bailout — right before he launches into a mesmerizing rhapsody on the middle class, the camera lingering on his greased hair and patchwork sweater, you realize the utopia of Detropia isn’t the hoped-for return of the old days. It’s the insistence of humanity to persevere and form a community, no matter how crazy things get.