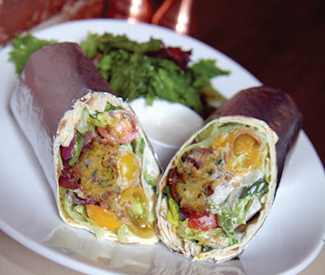 Walking up to Machka, directly across from the Transamerica Building behind a line of motorcycle and Vespa parking, you feel as if you’ve stumbled upon a chic cafe in Rome. In fact, Machka is Turkish, with a brick-walled dining room with massive chandelier, whose lighting casting an appealing glow on fellow diners, while a flat screen plays classic Turkish films, like Kirik Plak (1959), visible through a glass wall from inside the restaurant.

Machka was just opened in July by lawyer Farshad Owji and his wife Sibel. The chef is Reynol Martinez, who served those delightful duck confit tacos and some of SF’s best fish tacos at Potrero Hill hidden gem, Papito. (He also cooked at Globe, Aperto, and Epic Roasthouse.) Service is one of Machka’s strong suits, including the professionally engaging warmth of Jessica — who was a server at Nopa — or Gulhan, who recently moved here from Turkey, his gracious hospitality setting a familial tone. P.S. he’s also an inspiring reader of Turkish coffee grounds.

Starting with the SF standard — locally sourced, mostly organic ingredients — one journeys to Turkey in rare form. Although there have long been hole-in-the-wall treasures like A La Turca in the Tenderloin or the Mission’s mid-range Tuba, the Turkish list has been short. Machka fills a gap, faring well with both traditional and creative Turkish. In the meze-starter realm, pistachio-crusted goat cheese ($11) is easy to lap up. Spread the subtle, soft cheese, crunchy with pistachios, over toasts, sweet and savory with caramelized onions, golden raisins and wildflower honey. There’s only a handful of lamb tartare dishes in town (Gitane’s being one of the best), and Machka’s version ($13) is brightly gratifying, tossed in mint, grainy mustard and argan oil, with haricot verts.

Tender, grilled octopus ($13) is mixed with chickpeas and celery, doused in lemon and olive oil — it’s a delicate smattering of celery leaves that adds a garden-fresh aspect to my favorite invertebrate. Blue cheese and chorizo-stuffed dates ($9) are a crowd-pleaser, particularly wrapped in pastirma (Armenian cured beef) in a sherry wine-mustard vinaigrette. The only missteps seemed to be a bowl of fava beans ($10) which sounded like the ideal veggie dish, mixed with English peas, snap peas, cilantro, mint, sumac in lemon and a smoked paprika vinaigrette, but was surprisingly bland. A traditional fattoush salad ($11) was likewise humdrum, a mere couple tomatoes, cucumbers and pita crisps unable to bring the greens to life.

On the entree side, I crave the durum (flatbread) wrap ($12) to-go when I don’t have time sit down and savor the restaurant’s soothing setting. I love the falafel wrap (also available as a $9 starter), laced with cacik (light, seasoned yogurt), pickled cucumber, lettuce, grilled red onions, bell peppers, cherry tomatoes, and tahini sauce. The elements weave together into the ideal wrap: fresh, textured, filling — also available with chicken, lamb or beef. Speaking of lamb, Machka does it right: as a burger ($15), curry-marinated in a kebab over rice pilaf (one skewer $13, two $26), or in my top choice, a marinated ground beef and lamb sausage, the adana kebab.

Chef Martinez displays vision in entrees like a seared branzino ($25). The flaky fish is interspersed with roasted fennel and cherry tomatoes, which taste like another glorious fruit altogether — sweet, sour, fantastic — roasted in a balsamic pomegranate reduction. It’s an elegant entree that takes an unexpected turn with the tomatoes.

The wine list ($9 for a five ounce glass, $14 for eight ounce) includes interesting Turkish wines, like an acidic, zippy 2010 Kavaklidere Cankaya Emir from Ankara, and from the same producer, a balanced, fruity red: 2011 Kavaklidere Yakut Okuzgozu. Another wine that worked well with starters was a tropical fruit-laden 2011 Pinot Gris from New Zealand, The Ned.

You couldn’t do better than a dessert of kunefe (or kanafeh, an Arab cheese crusted in shredded pastry, often phyllo dough — Jannah in the Western Addition also makes a beauty of a version). Soft, white cheese oozes from crisp, shredded phyllo soaked in honey and rosewater syrup, a finish sweet and satisfying as the overall experience in this latest Turkish respite.