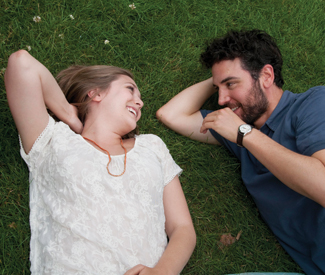 FILM It can’t be a coincidence that within a week, a pair of films have been released about 35-year-olds who contemplate hooking up with 19-year-olds. That 16-year age gap — with an immature or other otherwise emotionally stunted thirtysomething on one end, and a precocious millennial on the other — is narrow enough to be plausible, but just wide enough to be awkward.

Now in theaters, Hello I Must Be Going traces the existential flailings of Amy (Melanie Lynskey), so discombobulated post-divorce that she moves back home and takes up with Jeremy (Christopher Abbott), the son of one of her father’s potential clients. Despite their chic Connecticut lifestyle, Mom (Blythe Danner) and Dad (John Rubinstein) have been hit by the recession; Amy’s self-pitying second adolescence only makes the household tension worse. Meanwhile, her hot, clandestine fling with Jeremy, an uninhibited actor, is tested less by their age difference than by his connection to the lucrative account that Amy’s father is desperately trying to land. Of course, there is a cringe-worthy scene where Amy crashes a party, looking for Jeremy, and the bleary-eyed youth who answers the door announces “Someone’s mom is here!”

This week’s Liberal Arts reverses the genders of the controversial couple, with Jesse (How I Met Your Mother‘s Josh Radnor, who also wrote and directed) falling for Zibby (Elizabeth Olsen), a student at the leafy Ohio university he graduated from years before (never named, but filmed at Kenyon College, Radnor’s own alma matter). The two meet when Jesse, now a jaded Brooklynite, visits to celebrate the retirement of Professor Hoberg (Richard Jenkins); unlike Hello‘s Amy and Jeremy, who waste no time knocking boots, the question of whether to consummate the relationship becomes a major plot point.

Liberal Arts is at its best when delineating a specific type of collegiate experience — as safe, privileged bubble where, as Jesse explains, you can announce “I’m a poet!” without anyone punching you in the face. It can also be an oppressive space, as illustrated by a cranky prof who feels trapped by academia (a razor-sharp Lucinda Janney), and a morose classmate of Zibby’s who identifies a little too closely with David Foster Wallace.

And it’s stuff like the Wallace references (again, never named — just identified via heavily dropped hints, for all the cool viewers to catch) that’re ultimately Liberal Arts‘ undoing. Radnor explores some interesting themes, but the film is full of indie-comedy tropes — the friendly stoner (Zac Efron) who randomly appears to dispense life lessons; an anti-Twilight rant that’s a bit too pleased with itself; the unusually attractive character who appears in the first act and is obviously destined for inclusion in the inevitable happy ending.

By contrast, “airless” and “predictable” are not words anyone would use to describe the life of legendary fashion editor Diana Vreeland, colorfully recounted in Diana Vreeland: The Eye Has to Travel, a doc directed by her granddaughter-in-law, Lisa Immordino Vreeland. The family connection meant seemingly unlimited access to material featuring the unconventionally glamorous (and highly quotable) Vreeland herself, plus the striking images that remain from her work at Harper’s Bazaar, Vogue, and the Costume Institute of the Metropolitan Museum of Art.

“Narrated” from interview transcripts by an actor approximating the late Vreeland’s husky, posh tones, the film allows for some criticism (her employees often trembled at the sight of her; her sons felt neglected; her grasp of historical accuracy while working at the museum was sometimes lacking) among the praise, which is lavish and delivered by A-listers like Anjelica Huston, who remembers “She had a taste for the extraordinary and the extreme,” and Manolo Blahnik, who squeals, “She had the vision!”

Glamour also factors into Peter Ford: A Little Prince, a 40-minute documentary directed by Alexander Roman, who’ll attend both Sun/30 screenings with film subject Peter Ford. “My whole life has been defined by being Glenn Ford’s son,” the sixtysomething Peter says. (For all the Jeremys and Zibbys out there, Glenn Ford was a Hollywood superstar in the 1950s.) Home movies and snapshots depicting a blissful domestic life contrast with Peter’s rambling interview, which spans the length of the film and reveals that all those happy scenes were staged for publicity purposes. Less a bio of Glenn, Peter, or Peter’s mother, dancer Eleanor Powell, A Little Prince is more a peek into the psyche of someone who’s spent his life in the shadow of a legend. “Being a movie star’s child is the hardest job in the world,” Peter says — hyperbole clearly wrought from a lifelong identity crisis.

And it wouldn’t be a week in San Francisco without a film festival (or two: check out Nicole Gluckstern’s take on the Berlin and Beyond Film Festival elsewhere in this issue). The folks at SF IndieFest — who already program their flagship fest, plus DocFest and genre showcase Another Hole in the Head — add another to the rolls with the Northern California Action/Sports Film Festival.

Aimed at athletes rather than typical film-fest types (evidence: movies screen at Sports Basement locations, where you can gear up for your next adventure on the way out the door), this three-day event contains the expected array of skiing, skateboarding, and surfing flicks — check out Manufacturing Stoke, which takes a look at how the surf industry has been transformed by a recent trend toward using environmentally-friendly materials to build boards — but also films focusing on more specialized pursuits like bouldering and slacklining.

Fans of Into Thin Air won’t want to miss 40 Days at Base Camp. The base camp in question is the bustling, ever-shifting village — filled with an international population of guides, climbers both soulful and breezy, Sherpas, volunteer medics, and assorted support staff — perched beneath Mount Everest. As personal triumphs mingle with day-to-day activities (and grimmer tasks, like clearing away long-dead bodies that have worked their way up through the ice), one observer accurately dubs the scene “a fascinating microcosm.” *

Liberal Arts and Diana Vreeland: The Eye Has to Travel open Fri/28 in Bay Area theaters.