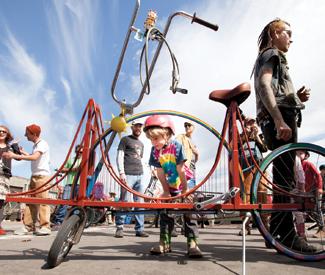 Check out this week’s cover story on the 20th anniversary of Critical Mass, then proceed directly to the festivities below

East Bay Ride, meet at West Oakland BART station, 11:45am. Ride along the east shore of the bay to the Rosie the Riveter monument in Richmond.

Farewell Bike Ride and Party, 1pm departure from 518 Valencia, 2pm at Ocean Beach. Bring food and drink to share with your new friends and listen to bands on Rock the Bike’s pedal-powered stage.