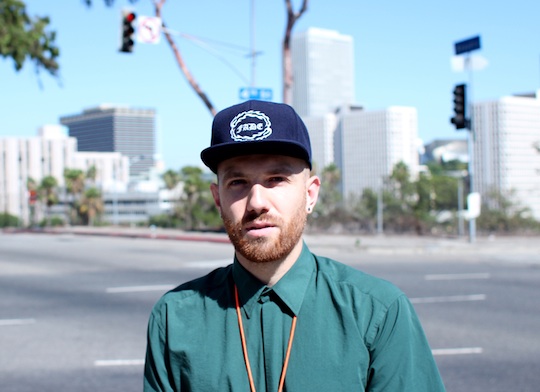 You can’t talk contemporary American bass music without starting right off at Kingdom, a.k.a. LA’s Ezra Rubin. (He appears here Sat/22 at the Lights Down Low party at Public Works, in a bananas lineup that includes Kim Ann Foxman, Miracles Club, jozif, and MikeQ.)

Two years ago, his bounce-rave masterpiece “Mindreader” and the low-creeping, R&Bleepy That Mystic EP popped the top of critics’ lists and club faves, and injected some mad energy into the scene on these shores. That was followed by last year’s acclaimed Dreama EP, which blueprinted some interesting bass possibilities, swinging from cinematic vogue-warps to post-grime gamer spaciness.

Kingdom also provided a crucial link between London’s fantastic label-club Night Slugs scene, in which he came up in the late ’00s, and the somewhat scattered US bass scene that operated outside the Diploshere. His Fade to Mind touring collective and label, launched with Prince William, became a focal point for underground American fractal-bass musicmakers like Nguzunguzu and Total Freedom who could hype a club through their disparate styles, but didn’t mind getting a little arty about it.

Although Kingdom seems to tour constantly and has appeared here a few times over the last couple years, it’s been a minute since he released any new material. I wanted to catch up with him over email about what he’s got cooking, and his feelings about the current direction of the American bass music scene. Also, who cuts his hair?

SFBG That FadeFM live set you dropped in July hit me as a bit darker than expected. We’re all eagerly awaiting the follow-up to the Dreama EP — are you being drawn in a darker or harder direction, and might your future output reflect that? Can you give us any news about upcoming releases?

KIngdom The new tracks I’m working on are just more extreme! I’ll be releasing two projects through Fade to Mind this fall. My new solo tracks are darker and more minimal than my previous releases, and on the other end, the second project will be more melodic than any of my previous work, and will feature vocals from Fade to Mind’s first official vocalist, Kelela Mizanekristos. Can’t wait for the world to hear our first song together!

SFBG The Night Slugs scene maintains its high level of quality, but its been kicking around for what seems like an Internet eternity — a lot of other bass labels have faded in the meantime. What’s the current environment for the Night Slugs (and your own personal) sound — do you find it’s still considered “underground”? Has a different generation taken to it?

KIngdom I think it’s timeless and will always weave in and out of what resonates with a certain type of music fan. Everyone in the whole Fade to Mind-Night Slugs continuum is producing different types music, music that is true to who they are, so regardless of passing trends the music stays true to itself and its maker.

SFBG How has the experience of being a part of the Fade to Mind collective and label been? It’s been pretty amazing to watch artists like Nguzunguzu and MikeQ gain some fame in the broader hip hop and dance worlds …

Kingdom Part of? I created the label, alongside Prince William, and its the best feeling in the world to see them doing so well. MikeQ and Nguzunguzu are also close friends from before the label existed, so that makes it even more rewarding.

SFBG How do you feel about the “trap” moniker being attached to a lot of trippy bass music these days, including music that’s only peripherally influenced by the original Houston trap scene? I’m finding a lot of Night Slugs joints being tagged with the trap genre label, and wondering if that might help wider audiences grasp what the sound is in the dubstep-EDM pop world of these United States…. which may be a blessing or a curse.

Kingdom Many members of the collective have been listening to southern rap music forever and drawing influence from it. When people try to ride any microgenre it makes us all cringe, especially one so terribly and insultingly named. Girl Unit really pioneered the sound a couple years back, but he gave it his own twist and made sure it was produced impeccably. Most of the stuff being made now has no production value and you can tell by listening that it’s made by former hard electro and dubstep producers.

SFBG I think a big part of your image is your great (and consistent) look — can you give us some drop on any labels or designers you favor? Who cuts your hair?

Kingdom Haha! I mainly support my friends who run their own labels like Cassette Playa, Hood By Air, Telfar, and Gerlan Jeans. Aside from that I just hunt through garbage really. As for my hair, that’s a trade secret, but I by no means invented this hair cut.

SFBG You released your own genius twist on a vogue ha track with “Stalker Ha” — and I’m sure you’ve witnessed the rise of vogue beats to the fore of cutting-edge bass music. Can you tell me a bit about the genesis of that track, and how much influence vogue beats have had over you productions?

Kingdom I wanted to make a scary and cinematic “Ha” beat. The original bootleg demo I made had Missy’s rap verse from Monica’s song “Knock Knock” which is about a dude bugging her and trying to come up to her house begging her to take him back, so it fit with the stalker vibe of the song. For the final version I stripped out the rap. Vogue beats have been an influence on my music forever, it’s crazy raw energetic music, but also off-kilter and jagged in its own way.

SFBG The last time I saw you was in October 2010, you were playing Mustache Mondays in LA. And I was kind of blown away at how great the combination of a mostly gay freak crowd and your beats was. Do you find yourself playing many queer-oriented parties outside of NYC or LA? If so, how has the reaction been?

Kingdom I haven’t been booked at many queer events recently, mostly straight clubs, and mixed events, too. I find I get a good reaction from both scenes!

SFBG Who are you listening to a lot right now?

Kingdom R&B is always on my playlist, loving the resurgence of a lot of my favorites. Brandy has new material out right now, Missy just dropped two new singles with Timbaland, Ciara’s new song “Sorry” is an anthem, and the new Jeremih mixtape is crazy. Also listening to Beek and Divoli Severe from MikeQ’s Qweenbeat label a lot, as well as the masters we just got back for the next Fade to Mind release, which consists of five new compositions by Fatima Al Qadiri.