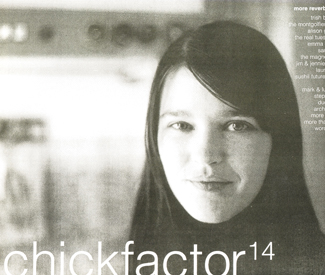 MUSIC There was a time, not so long ago, when the fanzine was a glittering portal. It was the best avenue for learning about new, underground, innovative music across the country, before the all-powerful grip of the Internet forced us to idly click our way through back catalogs. The ink and paper projects were passed to friends in the same manner one traded handmade mixtapes.

High among those infamous fanzines and punk mags was a pioneering indie pop-centric zine called chickfactor — put out by then-New York based editor-writer-photographer Gail O’Hara and Black Tambourine singer Pam Berry (who moved to London in 1995). Perhaps you’ve heard Belle and Sebastian’s song “Chickfactor” about it?

The publication’s print heyday lasted from 1992 through ’02, and is now present mostly as an online museum, but with some hints of movement in the near future. For one, its first paper issue in 10 years will be released next month, October 2012. And two, to celebrate her zine’s 20th anniversary, O’Hara has put together a series of shows around the country — and in London — featuring bands and musicians that came of age on the pages of the publication.

Just last week I saw something about an EDM blog that’s now putting on club nights up and down the coast. That’s not really what this is. This is a more DIY reunion, of bands, of fans, of readers, and of early twee pop enthusiasts (though the bands and the zine’s founders would probably disagree with the twee part).

“It was just an excuse to have a party with great live music,” says O’Hara, now based in Portland, Oreg. “I am pretty good at setting up shows, and it used to be something I did all the time when I lived in New York and London. One reason I’m good at it is that I ask people who never play, and sometimes they say yes. I really missed doing it, and the 20th anniversary seemed a good excuse to plan something in advance.”

“Many of these bands take a lot of prodding, and I was up for the task,” adds O’Hara.

All of the lineups are slightly different, but share in a common thread of the early twee and indie pop scenes in the ’90s Pacific Northwest. One of the headliners in San Francisco, the Softies, are only doing four shows this year, and the one in SF will be the last one.

The Softies, a beloved guitar-and-vocals duo formed in 1994, was one of those bands that hadn’t played in some time. The Pacific Northwest duo was made up of Rose Melberg and Jen Sbragia, both musicians who were in other bands prior to, during, and after their stint as the Softies (Melberg in Tiger Trap and Go Sailor; Sbragia of the All Girl Summer Fun Band). The Softies’ last show was in 2000 on a brief tour for their last LP, Holiday in Rhode Island.

“We had not even thought about the possibility of playing any shows until [O’Hara] asked us,” says Melberg, “and it never even crossed my mind that we could do it. When [Sbragia] said yes, I was amazed and totally excited. It was a lovely, unexpected surprise.”

Both have young kids and there’s a geographic distance between them now — Melberg in Vancouver BC, and Sbragia in Portland — but they made it work for the chickfactor shows.

Plus, they were never really out of touch, says Sbragia. The Softies first began as an intimate friendship between the two, so it came “as an extension of our friendship” says Melberg.

That closeness was apparent in the music of the Softies, a endearing, melodic blend of influences with tender-hearted vocals that inspire a still-dedicated fan base. It also inspired a somewhat dirty word to those involved: twee.

chickfactor itself was often mentioned in the same breath as twee, but in truth, it was simply intertwined with indie music and indie pop from the start. “I worked at Spin and took full advantage of advance tapes, free concert tickets, and everything else music related in the early ’90s,” O’Hara explains. “Most of my friends were music intensive nerds too. I had a big Manhattan studio so I put a lot of bands up over the years and set up many concerts at Fez, Under Acme, Tonic, and Mercury Lounge…and I hired musicians to work as writers and/or copy editors at Spin and Time Out New York when I was there.”

She also asked musicians to contribute to chickfactor, including Carrie Brownstein and Stephin Merritt — an aside, O’Hara later co-directed and co-produced the documentary Strange Powers: Stephin Merritt and the Magnetic Fields. And many of the interviews in the zine were casual riffs with soon-to-be-famous indie artists (Stephen Malkmus, Superchunk, Neko Case, Cat Power).

So what’s up for the 30th anniversary, next decade? Who’s left for O’Hara to pester for live shows?

“Well, since you asked. I plan to head into the woods in Northern California and find Kendra Smith and ask her to play. That would be my number one dream. I recently read an entry in a journal from 1995: ‘Kendra Smith called and left a message. She is still working on the chickfactor interview I gave her two years ago.'”

CHICKFACTOR 2012: FOR THE LOVE OF POP