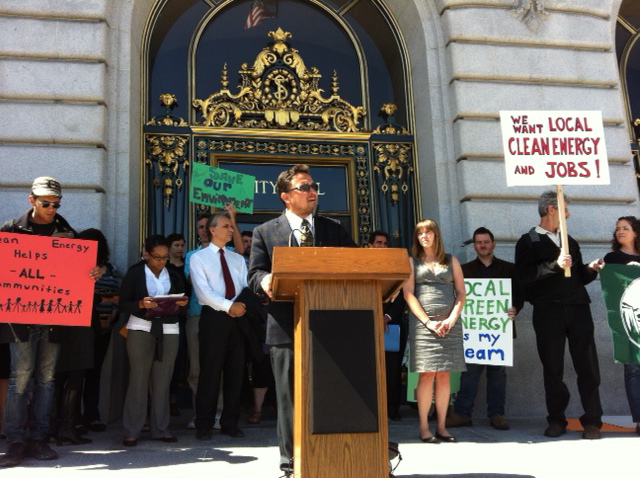 The San Francisco Board of Supervisors today cast an historic vote that was more than a decade in the making, approving the CleanPowerSF program – which challenges PG&E’s monopoly by offering 100 percent renewable energy directly to city residents – on an 8-3 vote that would be enough to override an implied veto threat by Mayor Ed Lee.

The outcome was far from certain throughout the two-hour hearing as conservative Sups. Mark Farrell and Carmen Chu led efforts to undermine the program, which was the final work product of retiring San Francisco Public Utilities Commission Executive Director Ed Harrington, who previously served as the city’s controller for 17 years.

The pair of supervisors offered a series of amendments challenging the state requirement that city residents must proactively opt-out of such community choice aggregation (CCA) programs if they want to remain with PG&E, offering convoluted language that would have required people to opt-in to the program before its launch, and requiring that the $13 million in reserve funds from the SFPUC be covered entirely by CleanPowerSF customers, which could increase its rates.

“It looks like the amendments would be harmful to the success of the program,” Sup. Eric Mar observed, prompting Farrell and Chu to flash broad conspiratorial smiles at one another.

Sup. Scott Wiener, who was undecided and considered a key swing vote in reaching a veto-proof majority, said he also had concerns about the opt-out requirement and wanted to better understand how the amendments would work and whether they were legal. “For me, I’m not interested in putting any poison pills in here,” he said.

Wiener posed questions about the amendments to Farrell and to Harrington, who said it was possible for the SFPUC to have CleanPowerSF customers repay the initial allocation of reserve funds over time but that he wasn’t sure how the opt-in change would work without sabotaging the program.

“It harms the ability to have an intelligent conversation with people,” Harrington said, noting that rates are based on the number of customers in the program, so it would be nearly impossible to survey everyone’s potential interest without being able to tell them how their bills would be affected.

As it is, the SFPUC has already done extensive surveys of which neighborhoods and demographics are likely to be interested in taking part in CleanPowerSF, initially paying about $10 more per month for 100 percent renewable energy (PG&E’s portfolio includes less than 30 percent renewable). “We’ve done extensive surveys already,” Harrington said. Based on that research, the city is initially rolling out the program to less than a third of city residents, who will be repeatedly notified about how to opt-out, anticipating about 90,000 customers remain in the initial program.

The program has been repeatedly tweaked over the last eight years that it’s been in development, during which time Marin County launched a successful version of the CCA concept that was developed in San Francisco by legislators Tom Ammiano, Carole Migden, and Mark Leno.

“I feel pretty comfortable trusting Ed Harrington on whether the numbers add up,” said the measure’s chief sponsor, Sup. David Campos, arguing against the Farrell/Chu amendments, later adding, “With Ed Harrington leading this charge, this is as good as it gets. If you don’t like CCA under Ed Harrington, you’re not going to like CCA.”

Farrell claimed to support CCA in concept, but he strenuously objected to the opt-out requirements that Migden included in the enabling state legislation, which she had argued was the only way to make CCAs viable against PG&E’s proven willingness to spend tens of millions of dollars to sabotage would-be competitors.

“It’s the wrong way to legislate, the opt-out. It smells of coercion,” Farrell said. Campos countered that, “The best thing we can give the consumers in San Francisco is a choice, a meaningful choice.”

Wiener ultimately made a motion to delay the item by a week, something Mayor Lee yesterday told the Chronicle he wanted, in order to further study the opt-out issue, telling Farrell that his amendment “feels a little seat of the pants to me.”

Campos and other progressive supervisors who were supporting CleanPowerSF argued against the continuance, noting that it has been years in development and sitting in board committees since January, while the Farrell/Chu amendments weren’t offered until this meeting had already begun.

The motion for a continuance failed on a 4-7 vote, with Wiener joined by Farrell, Chu, and Sup. Sean Elsbernd (who offered no comments throughout the hearing).

Then, as the vote on the Farrell/Chu opt-in amendment came up for vote, Wiener said, “I don’t feel comfortable voting for amendments that I don’t know what they’ll do,” and it failed on a 3-8 vote.

Sup. Malia Cohen had earlier indicated a willingness to support the other Farrell/Chu amendment: saddling CleanPowerSF customers with paying the SFPUC back for reserve fund costs – which Harrington indicated could be dragged out over many years to minimize the impact on rates, and which might not be necessary at all if the initial program exceeds expectations.

That amendment was then approved on an 8-3 vote, with Sups. Jane Kim, Christina Olague, and John Avalos opposed. Another set of amendments that would keep low-income city residents out of the initial rollout and take other steps to reduce their rates if they opted in – which was developed by Kim, Cohen, and Sup. Eric Mar – was unanimously approved by the board.

Then it was time for the big vote on creating the CleanPowerSF program, approving the contract with Shell Energy Northern California to administer it, and authorizing the initial $19.5 million expenditure. Would there be eight votes to override a veto by Mayor Lee, who has been under pressure by PG&E and their downtown allies to kill the program?

“To be perfectly candid, I struggled mightily with this contract,” Wiener said, reiterating his concern about its opt-in requirement, noting that the measure wasn’t perfect, even though it was significantly improved from earlier versions. It sounded as if he were about to vote against it.

“What we have the opportunity to do is move forward with clean power,” Wiener said, noting that even Marin County supervisors who initially opposed its CCA have come around to supporting it. “This is something I believe we should try.”

And with that, the board voted 8-3 to launch the program in mid-2013, with Chu, Farrell, and Elsbernd opposed.

Campos said he was “pleasantly surprised” by the vote, while key supporters say they are cautiously hopeful it will stand up during next week’s final supervisorial approval on second reading and in a veto override vote, if that becomes necessary. Campos said he was thankful for the work of Harrington, who got a standing ovation after the vote as the board recognized him for his long service to the city.

Earlier in the meeting, Harrington told supervisors that while the program isn’t perfect, and it contains some risks that he considers reasonable, there is no other way the city has identified to meet ambitious greenhouse gas reduction goals it has set for itself over the last decade. It is city policy to reduce emissions by 25 percent below 1990 levels by 2017 and 80 percent below those levels by 2050.

“This program before you has the only chance of reaching those goals. There’s nothing else,” Harrington said. He also said “it’s an incredibly efficient way to spend money,” noting that the city has spent $90 million on solar and other renewable energy projects that power fewer than 7,000 homes, whereas this $19.5 million will power 90,000 households, possibly without ever tapping into that $13 million reserve fund set aside to cover any losses by Shell, which will buy renewable energy, a role the city hopes to eliminate as it develops its own projects.

Harrington said the ultimate goal of CleanPowerSF is to develop a large enough customer base that the city could use revenue bonds to finance a wide variety of renewable energy projects – many using solar arrays along city-owned property connected to its water system stretching all the way to Hetch Hetchy Valley – that would pay for themselves.

“The real issue is can you build a facility that will have this rate structure support it?” Harrington said.

That’s the real power and potential of CleanPowerSF – finally taking action to address global warming, which will have a huge impact on San Francisco and future generations – as supporters noted in a rally outside City Hall before the meeting. Sen. Mark Leno said that he doesn’t usually weigh in on proposals before the board, but that, “This is an exceptional time and this is an exceptional vote. This is the time that we need to address our inconvenient truth.”