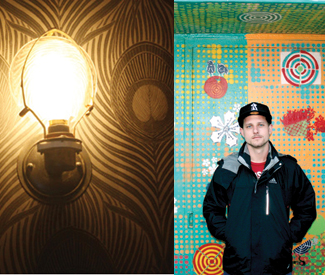 SUPER EGO Last Saturday was one of those incredibly painful nights when there were about 30 awesome-sounding parties that peaked around midnight but all closed at two. Sad trombone, San Francisco, sad trombone. Look, I know our last call cut-off is a state-mandated dealie, but can’t we make a case for our fabulous party exceptionalism? And what is the point of all these rich social media companies relocating to SF if they aren’t paying someone off to let us bump all night? Seriously. I am not seeing the IRL benefit here.

One of the affairs I managed to beep-beep through on the hectic party express was the “soft opening” — no jokes! And no, I did not make the party actually called Soft Opening that same night — of Kink.com’s gorgeous new Armory Club (1799 Mission, SF. www.armoryclub.com), across the street from Kink’s Armory HQ itself, which will leave no one with a sad trombone, but not for the reason you’d think.

MOTHS TO A FLAME
For the past two years, there’s been a chill, cherry Upper Haight-via-Berkeley (with a couple all-night stops at Gray Whale Cove) house scene brewing, centered on the free Spilt Milk parties at Milk Bar, thrown by the deep-grooved Mother Records crew. (Mother not like drag mother but like someone who studies moths.) At first glance, the Mother crew — including Mountaincount, King’s Ransom, Wentworth, Nil, and Taylor Fife — are a lovable bunch of scruffy Cal lads into outdoor raves and elevated mental states. At second glance they’re still all that, but also intensely dedicated to making great music and cultivating a smart but laidback crowd.

Rad new free compilation EP Buff-tip (www.soundcloud.com/motherrecords), named for European moth species Phalera bucephala, shows off the Mothers’ variety, with tracks spanning R&B house, techno samba, and electro raveup. “Like most of the Cal scene, we were into dubstep until a couple years ago,” Fife told me. “But it all started to sound the same, and the crowd went in a more intense direction. We gladly call what we do house, though there’s still definitely a bass music core.” (Special shout-out here to Wentworth’s nifty side project, live electro-house trio Pixel Memory.) The label’s tricky name was inspired, variously, from flashes of light at Burning Man, a moth tattoo on someone’s arm, and a late afternoon smoke-session to find something “subversive, silly, and confusing.”

Shed no tears for the passing of the season with this breezy, Balaeric blast, courtesy of the extremely delightful DJs Chris Orr and Derek B. It’ll be a double rainbow of beach-ready sounds from their extensive collections, from Brazilian jams to ’90s house hummers.
Wed/19, 9pm, free. Otis, 25 Maiden Lane, SF. Facebook invite

I miss the dark days of late ’00s Bristol dub-bass. Everything’s wonderfully sophisticated and mesmerizingly glitchy now, of course, but sometimes I just want to be dunked deep and ragga-rized. Senor ‘Blim (and his oft-partner Shackleton) always delivered the goods, this intimate night should take us back with a few nice updates.
Thu/20, 10pm, $5. 222 Hyde, SF. www.222hyde.com

One of my favorite bass-oriented anything-goes parties is launching a label, and it’s kind of about damn time, especially since its roster of talent has been SF-essential for a while. Ghosts on Tape has the first release, “Nature’s Law,” a chimey rave-jam. He’ll get support at this free launch party from Low Limit (love!), Rollie Fingers, and Shawn Reynaldo.
Fri/21, 10pm, free. 222 Hyde, SF. www.222hyde.com