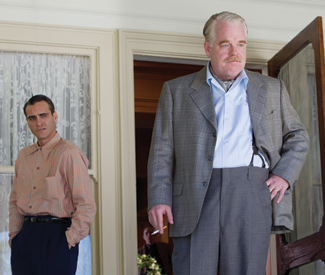 FILM The San Francisco International South Asian Film Festival, presented by 3rd I, celebrates its 10th year with programming at the Roxie (Wed/19-Fri/21 and Sun/23), the Castro (Sat/22), and one night in San Jose (Sept 30). Opening night film The Island President, about former Maldives president Mohamed Nasheed, had a theatrical run in San Francisco earlier this year, but its themes of climate change are as urgent as ever — and the political situation in the Maldives remains tumultuous. Bay Area-based director Jon Shenk will be on hand for updates and discussion.

The rest of the fest busts out, yes, the always-popular Bollywood screening at the Castro — this year: Homi Adajania’s Cocktail, a fizzy rom-com about best friends who almost let a guy come between them — and a reprise screening of Big in Bollywood, a highly entertaining doc about a struggling SoCal actor who stumbles into megafame after starring in 2009 Bollywood hit 3 Idiots.

Among the new docs, Decoding Deepak, directed by the son of New Age guru Deepak Chopra, offers insight into what it’s like to be the son of a man who’s built a career on commodifying spirituality, thanks to a string of best sellers and an Oprah seal of approval. Though the thirtysomething Gotham Chopra seems focused on catching his father off guard, Deepak offstage is exactly what you’d expect: a bit entitled and narcissistic, as many famous folks tend to be; obsessed with Twitter, as all media people tend to be; and “a guy who turns any mundane question into a talking point for a new book.”

Far more revealing is The World Before Her, which contrasts (and finds eerie similarities between) the Miss India pageant and a training camp for young girls run by Hindu nationalists. While the beauty queens are subjected to Botox and painful skin-lightening treatments, the budding extremists are lectured on how women have “natural weakness of character” and must marry by 18 (forget about having a career, in other words). Both groups undergo physical training (one group prizes thinness; the other, the ability to fire guns). But the Miss India contestants are surprisingly practical, pointing out that winning the crown offers hope for a better life in a country that limits options for women. Most alarmingly, a nationalist camp counselor declares that it’s OK for her father to beat her because he let her live, despite being an undesirable “girl child.” Meanwhile, past Miss India winner Pooja Chopra reveals that her own father suggested murdering her as an infant, for the same reason. Chilling and eye-opening, and a standout film in the fest.

Hollywood’s big movie this week is The Master, Paul Thomas Anderson’s much-hyped likely Best Picture contender. Philip Seymour Hoffman stars as Lancaster Dodd, the L. Ron Hubbard-ish head of a Scientology-esque movement. “The Cause” attracts Freddie Quell (Joaquin Phoenix, in a welcome return from the faux-deep end), less for its pseudo-religious psychobabble and bizarre personal-growth exercises, and more because it supplies the aimless, alcoholic veteran — a drifter in every sense of the word — with a sense of community he yearns for, yet resists submitting to.

As with There Will Be Blood (2007), Anderson focuses on the tension between the two main characters: an older, established figure and his upstart challenger. But there’s less cut-and-dried antagonism here; while their relationship is complex, and it does lead to dark, troubled places, there are also moments of levity and weird hilarity. (Might have something to do with Freddie’s paint-thinner moonshine.) Easily the best film of 2012 so far.

Also at the multiplex, you can take in a pair of cop movies; feel free to base your ticket-booth decision on whether you prefer your violence cartoonish or gritty. The former comes courtesy of Dredd 3D, a pretty enjoyable comic-book adaptation thanks to star Karl Urban’s deadpan zingers. This is not a remake of the 1995 Sly Stallone flop Judge Dredd, by the way, though it might as well be a remake of 2011 Indonesian import The Raid: Redemption. The stories are identical. Like, lawsuit material-identical: super cop infiltrates (and then becomes trapped in, and must battle his way out of) a high-rise apartment tower run by a ruthless crime boss. Key difference is that Dredd has futuristic weapons, and The Raid had badass martial arts. (Also Dredd‘s villain is played by Lena “Cersei Lannister” Headey, so there’s that.)

Buddy cop movies tend to go one of two ways: the action-comedy route (see: the Rush Hour series) or the action-drama route, like End of Watch, which follows partners Taylor (a chrome-domed Jake Gyllenhaal) and Zavala (Michael Peña from 2004’s Crash) as they patrol the mean streets of Los Angeles, engaging in witty shit-talk and uncovering gruesome crime scenes. Writer-director David Ayer, who wrote 2001’s Training Day, aims for authenticity by piecing together much of (but, incongruously, not all of) the story through dashboard cameras, surveillance footage, and Officer Taylor’s own ever-present camera, which he claims to be carrying for a school project, though we never once see him attending classes or mentioning school otherwise.

Gyllenhaal and Peña have an appealing rapport, but End of Watch stretches credulity at times, with the duo stumbling across the same group of gangsters multiple times in a city of three million people. Ultimately, End of Watch is way too familiar (but not lawsuit-material familiar) to leave any lasting impression. Case in point: in the year 2012, do we really need yet another love scene set to Mazzy Star’s “Fade Into You”? *