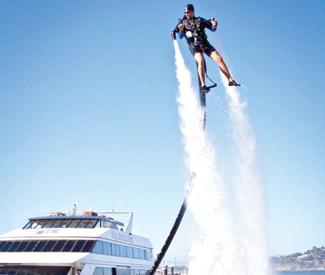 AIR Know that for this article I just spent an ungodly amount of time popping the Youtube replay button on Biggie’s 1995 30-second TV spot for St. Ides malt liquor, “Big Poppa” shoutouts from passing flygirls and all. Why besides the fashion tips, you ask? Turns out St. Ides is from good ol’ San Francisco, created by the McKenzie River Corporation, a somewhat overlooked party beverage marketing powerhouse that also brought us Steele Reserve, Black Star, and the one, the only Sparks, truly the hipster runoff off the ’00s.

But this is about the future, not the past — and what could be more “future is now” than McKenzie’s new product, Air (www.drinkair.com), the “alcohol inspired beverage” that’s started popping up in cuter nightclubs and sublebrity paws. A clear, carbonated, deflavored, de-aromatized malt product with 95 calories and four percent alcohol content per can, and available in berry and citrus flavors, Air is packaged in sleek, thin silver cans, and has variously been described to me as “sparkling alcohol water,” “flavored alcoholic club soda,” “diet vodka,” and “Not Redbull, more like clearbuzz.” All of those are kind of true — and we’re obviously through the cocktail-in-a-can looking class, people.

“We like to describe Air as a more healthy, less filling alternative to regular cocktails — although it tastes pretty great when mixed with vodka like club soda,” McKenzie’s marketing director, Ashley Garver told me over the phone. “It’s for people who want to keep the party going without all the sugar highs and lows or, shall we say, any overestimation of their own limits.”

Air had a pretty auspicious launch — thousands of San Francisco sports fans may remember the dude in the hydraulic jet pack zooming up over McCovey Cove this summer during a particularly iconic moment. “Here we were all excited to try out this brand new jetpack technology,” Garver said with a laugh, “and it turned out to be right when Matt Cain pitches a perfect game for the Giants.

Word’s still out on whether sports fans, notoriously fussy about their beverages, will take to Air. One target audience, smartly, is the electronic dance music crowd, whose booze buzz is a little tricker to uphold than that of the average couch potato’s. “I just got back from the Video Music Awards in LA where we had some great interactions with EDM stars,” Ashley told me. “I got to hang out with Kaskade.” An avowed Mormon, Kaskade might abstain, but his legions of complexly inebriated fans may appreciate Air’s quick refreshment. Probably, too, will the more discerning and diverse crowds at local venues like Mezzanine, 222 Hyde, and 1015 Folsom, where Air is now served. And a team up with the awesome Lights Down Low party at Public Works on September 22 should spread more indie and underground dance-fan Air.

Which brings us to the legendary Sparks saga, which McKenzie marketed to indie and hardcore electro types so well that it pretty much branded a generation and was snapped up by Miller for hundreds of millions of dollars — only to be pulled from shelves due to objections over its deliciously killer combo of sugar, caffeine, taurine, and alcohol. What could possibly ever go wrong with that?

Garver laughs at the memory of Sparks, but stays positively on message: “The country came back to us looking for something lighter, more refreshing, less high octane and more innovative. We’d honestly been wanting to do something like Air for a while, but the technology wasn’t yet available to completely take the taste and smell out of malt liquor and leave something lighter.” (For the record, there still is a very, very slight beery mouth-feel of malt that’s not quite covered up by the carbonation or natural flavoring, but if you’ve ever woken up on a 40 oz. pillow, this mouth-feel is of infinitely minuscule concern.)

And what about that effete forerunner of Air, the clear malt liquor drink of the ’90s that became a famous running joke? Is Air just a zombie Zima? Or is it zomething different?

Garver laughs again. “I can certainly see where that comes from, but Air has like one third the calories and alcohol content of Zima, and it’s much more versatile. We have no added sugar so we’re a lot more healthy.

“Well, I guess I don’t know if you can ever get healthy drinking an alcoholic product. But we’re certainly aiming to make you feel lighter.”