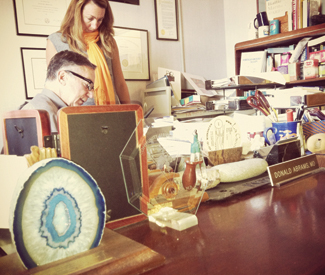 HERBWISE In 1992, Donald Abrams was in an Amsterdam hotel room watching the arrest of a volunteer at his hospital, SF General, on TV. 73-year old Mary Jane “Brownie Mary” Rathburn was being taken to jail for providing AIDS patients with THC-infused pastries.

The fact that Abrams, an oncologist who had turned his attention to HIV/AIDS in the midst of the virus’ attack on San Francisco, learned of Rathburn’s plight via international news was particularly biting, given the circumstances. He was in the Netherlands attending the International AIDS Conference, which was originally slated to be held in Boston. The conference had to be moved when it became apparent that many of its most important participants would be unable to attend — in 1987, the US Senate unanimously passed a ban that prevented HIV-positive people from getting into the country. (Kudos to the government, by the way, for lifting that ban. Ahem, last year.)

One can imagine the questions that arose for Abrams regarding his country’s commitment to fighting the disease.

So later, when Rick Doblin of the Multidisciplinary Association for Psychedelic Studies (MAPS) wrote to General’s AIDS program suggesting that “Brownie Mary’s institution” take the lead in researching the effect of cannabis on AIDS wasting syndrome, Abrams swung into action.

He was watching his community waste away from the disease. And he wasn’t happy with existing treatments. The data supporting AZT’s efficacy was faulty, he thought, a quick fix by a government under pressure to come up with a solution to an epidemic.

In the pre-Proposition 215 era, large numbers of AIDS patients were getting pot from illegal cannabis clubs to combat the nausea and vomiting caused by AIDS wasting syndrome. The substance had to be studied, reasoned Abrams.

But organizing investigations into a federally-controlled substance is no easy matter. Since marijuana is a Schedule I drug with no officially-acknowledged medicinal use, research facilities have to get the go-ahead from several different government agencies (which focus on preventing drug abuse, not finding ways to use them to medical advantage) to be able to run experiments that use the stuff.

The process was interminable, though finally Abrams managed to complete important experiments with the drug which suggest marijuana is a useful tool in counteracting painful nerve damage, and that vaporization is just as effective a way to consume THC as smoking, among other findings.

After taking a break from researching pot for years, Abrams has once again submitted grant proposals for a few cannabis-related studies. He’s one half of a pot power couple — his husband, cannabis activist Clint Werner, is the author of 2011’s Marijuana: Gateway to Health and suggested at a June Commonwealth Club lecture that cannabis be as prevalent as ice packs in NFL locker rooms, so useful is the drug in ameliorating brain damage.

Of course, regardless of whether Abrams — who has since stepped down from AIDS research to focus on oncology — secures funding and permission for these new studies, and regardless of his findings thereafter, he hardly thinks his work will convince the government to legalize marijuana. He’s been a little disappointed with our elected officials lack of “backbone” in standing up to federal agencies that are making it harder for his older patients to access dispensaries.

Because see, the War on Drugs isn’t about the drugs at all, but politics. The man who has been researching the power of pot for decades is, sadly, resigned to the fact. Says Abrams one Thursday afternoon, sitting in his office in the SF General oncology ward: “It’s clear to me after doing this for 15 years that science is not driving the train.”

Even if the general public is of the 215-supporting sort — after all, he quips, “more people [in California] voted for marijuana than Meg Whitman.”