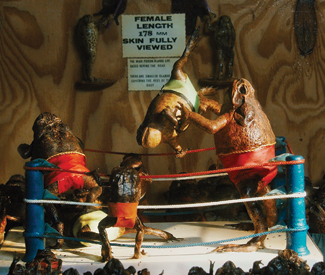 FILM They’re baaack — and in 3D. Director Mark Lewis returns to the subject that made him famous, or notorious, in Cane Toads: The Conquest. Lewis’ 1988 short doc Cane Toads: An Unnatural History — about the warty critters’ population explosion after being imported to Australia as part of an unsuccessful pest-control experiment, after which they became pests themselves — is by now a cult hit, thanks to its droll tone, quirky interview subjects, and toad’s-eye-view P.O.V. shots.

These days, Australia’s toad situation has, predictably, gotten worse — and weirder, thanks in part to the popularity of the first film, as Lewis chats up a mix of scientists, government officials, and everyday folk on the subject. High points: a man whose “traveling toad show” includes dioramas of costumed, taxidermied toads (there’s a wrestling match, a nightclub scene, a highway accident, and an Aussie rules football game); advanced production values, which render our bulging-eyed buddies in lush detail; and fun 3D flourishes, as when a squeezed poison gland splatters the lens. The film has its U.S. premiere this week at San Rafael’s Smith Rafael Film Center.

You may not recognize the name Wayne White offhand, but you will know his work: he designed and operated many of the puppets on Pee-Wee’s Playhouse, including Randy (the blockheaded bully) and Dirty Dog (the canine jazzbo). Neil Berkeley’s Beauty Is Embarrassing — named for a mural White painted on the side of a Miami building for Art Basel 2009 — charts the life of an artist whose motto is both “I want to try everything I can!” and “Fuck you!” The Southern-born oddball, who came of age in the early-1980s East Village scene, is currently styling himself as a visual artist (his métier: painting non-sequitur phrases into landscapes bought from thrift stores), but Beauty offers a complex portrait of creativity balanced between the need to be subversive and the desire to entertain. White appears in person Fri/14 in Berkeley at Rialto Cinemas Elmwood; Sat/15 at the Roxie in San Francisco; and Sun/16 at the Camera Theatres in San Jose.

The Bay Area’s fall film festival season is ramping up, with Cine+Mas, the San Francisco Latino Film Festival, leading the charge this week. The two-week event includes short films, narratives, and documentaries. Among the latter, highlights include Kimberly Bautista’s Justice for My Sister, a devastating study of the widespread, oft-unpunished violence against women in Guatemala, framed by one family’s fight for justice against a system powered by corruption and victim-blaming; María Teresa Rodríguez’s Children of Memory, about an organization seeking to reunite families torn apart by El Salvador’s decades-long civil war; Bernard Ruiz’s El Reportero, a PBS production about the bold journalists who risk their lives reporting on Mexico’s growing drug violence for Tijuana’s Zeta Weekly; and The Invisible Line, Lisa Díez Gracia’s short doc about a park run by the Hñahñu community of El Alberto, Mexico. There, visitors can camp, kayak, zip line, and be screamed at by faux-border patrol cops as part of a (hugely popular) illegal border crossing “experience.”

But it’s not all serious — those looking for uplift should seek out Mexican director Andrés Pardo Piccone’s Looking for Larisa, about the filmmaker’s quest to identify the charismatic child starring in 1970s home movies he bought at a flea market. The search enfolds film-restoration experts, anthropologists, archivists, Google, Facebook, in-person interviews, and more, and the doc that emerges is both engaging mystery and fascinating look at the interplay between home movies and memories.