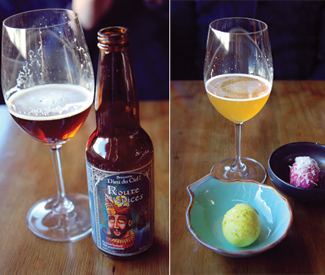 BEER + WINE Craft beers are in their heyday, alongside craft everything else — it only makes sense that they would begin to take prominence on local menus next to intricately prepared and finely sourced dishes. San Francisco beer luminary Dave McLean has been brewing Magnolia beers, among my favorites anywhere, at his Upper Haight brewpub for nearly 15 years, now expanding to a new Dogpatch location. Like Magnolia, modern classic Monk’s Kettle in the Mission has focused since its 2007 opening on serving food to match its beer offerings, and new Maven in Lower Haight is innovative in its extensive beer-food pairings menu. (And we haven’t forgotten more casual beer-and-sausage options like Gestalt and Toronado-Rosamunde.) Now, two new restaurants arrive where food is equally important to beverage, with exciting beer slants.

Opened in May with great wine world buzz, St. Vincent is owned by sommelier David Lynch, known for his impeccable wine list at Quince. Accordingly, the wine list at St. Vincent (named not for the popular indie musician but for a third-century Spanish deacon known as the patron saint of winemakers) is global and excellent, with many bottles in the $30–$50 range, plus affordable by-the-glass pours like a crisp, floral 2011 Domaine de Guillemarine Picpoul de Pinet.

Wisely, Lynch brought on beer director (and certified cicerone) Sayre Piotrkowski, whose brings his beer knowledge and keen eye for the unusual from his former position at Monk’s Kettle. Piotrkowski has made spot-on drink recommendations on every visit, and the friendly staff are well-versed on the menu. I’ve tasted many of the eight rotating beers on draft, like those from Oakland’s Linden Street and Dying Vines breweries, or delightful beers from tiny Pasadena micro-brewery Craftsman Brewing Co., including a Triple White Sage Belgian-Style Tripel or a 1903 Lager, pre-Prohibition style. Splurge for a $22 bottle of fascinating Birrificio del Ducato’s Verdi Russian Imperial Stout, spicy with hot chile from Parma, Italy. ($11 if you can find it at liquor store extraordinaire Healthy Spirits, btw.)

New Jersey native Chef Bill Niles (most recently of Bar Tartine) exhibits a strong dose of New Southern in his California cooking. Although dishes like she-crab soup ($14), utilizing sea urchin, sugar snap peas and Carolina gold rice in a corn-lobster chowder, or rabbit burgoo ($24), a mélange of white turnips, baby green okra, white corn grits, and rabbit loin sausage with unusual lamb’s quarter herb, are nothing like the she-crab soups I’ve loved in South Carolina or the burgoo stews I’ve dined on in Kentucky, Niles has reinterpreted the regional dishes with care — and a distinctly West Coast ethos.

Beet-horseradish or curry pickled eggs ($3 each) are a predictably a good time, while a hand-rolled pretzel with mustard and butter ($5) is a bit small and forlorn. I searched for the listed clothbound cheddar in the baked Vidalia onion soup ($9), where even onions didn’t impart the hoped-for flavor intensity. Rarely-seen, ultra-salty Welsh laverbread ($18) is a hunk of Tartine wheat bread lathered in Pacific sea laver (seaweed), Manila clams, and hen of the woods mushrooms, ideal with beer. Entrees like roasted duck leg ($22), surrounded by buttered rye berries, griddled stonefruit, celery, and pickled mustard are heartier, but, unexpectedly, I preferred a vegetarian entree: an herb-laden spring succotash ($18) of butter beans, white corn, and dandelion, perfected with padron peppers.

Though St. Vincent’s food voice feels like it’s still finding itself, I appreciate that it is not the same iteration of gastropub food we’ve seen a thousand times over.

Abbot’s Cellar opened in July and is Monk’s Kettle sister restaurant. The Lundberg Design (Moss Room, Quince, Slanted Door) space immediately impresses with 24-foot ceilings illuminated by skylights, and a long, 3000-square-foot dining room marked by reclaimed woods for a rustic, urban barn feel. A two-story stone cellar houses beer at proper temperatures, listed in a book that pulls out from the side of each table.

The volume lists more than 120 rotating beers — curated by co-owner and cellarmaster Christian Albertson with co-beer director Mike Reis — grouped by style (sours, saisons, etc.), with two pages dedicated to drafts. There’s a wall of glassware suited to every type of beer served, whether Jolly Pumpkin’s Madrugada Obscura Sour Stout from Dexter, MI, or Italian 2004 Xyauyu Etichetta Rame. A pricey ($14.50 for a six-ounce pour) Belgian Brouwerij De Landtsheer Malheur Brut is a dry, elegant Champagne-style beer served on the stem, one of ten offerings in a by-the-glass selection from large beer bottles rarely available by the pour.

As a temple dedicated to beer, the Cellar succeeds immediately. The bar and chef’s counter are ideal perches from which to sip, accompanied by hand-pump cask engines (sample Firestone Walker’s Unfiltered Double Barrel Ale from these classic pumps), and a reading shelf lined with Dulye’s collection of cookbooks.

Alternately, braised rabbit on tender handkerchief pasta ($23), dotted with English peas and hen of the woods mushrooms, is heartwarming, particularly with beer. “Wow factor” is in play with a unique beef bone marrow ($12) dish. The bone is topped with crispy house pastrami, alongside spicy greens, more pastrami, pickled mustard seeds, and rye croutons — one of the more exciting of countless bone marrow dishes I’ve had. While roast pheasant ($24) with lacinato kale and non-existent (but listed) cauliflower puree was too dry, a generous pork chop ($25) is insanely juicy and satisfying over chewy caraway spaetzle, topped with grilled peaches. A dessert of warm, roasted parsnip cake ($9), co-mingling with whipped cream cheese and a ginger molasses cookie, is a homey highlight, lovely with the coffee-almond malt of Great Divide’s Yeti Imperial Stout.

Ever since savoring a fantastic New England cider pairing with each course of a fall dinner at NYC’s Gramercy Tavern years ago, I’ve wondered when we might witness the arrival of urban cider bars. SF’s new Upcider and Bushwhacker in Portland are it thus far.

Two aspects of Upcider jump out immediately: Ozgun (Ozzie) Gundogdu and his sister’s warm welcome — Ozzie opened the bar with former roommate and co-worker Omer Cengiz — and a second story upstairs space with floor to ceiling windows overlooking Polk Street. One can sit at the windows, gazing below at a busy street scene, enveloped by low-ceilings and a cozy glow, transported to a European bar or maybe even one in Turkey, Ozzie and Omer’s homeland.

The bar, lined with rustic, reclaimed wood, houses a range of bottled ciders — 19 producers, 40 varieties of cider (and growing) at $5–$26 a bottle, the most expensive being a 750ml of Etienne Dupont Brut De Normandie from Victot-Pontfol, France. You’ll find big brands like Magners or ones we’ve seen often in SF like Fox Barrel, Crispin, and Two Rivers. But you’ll also discover three ciders from Wandering Aengus Ciderworks in Salem, OR, or J.K. Scrumpy Organic, a sweeter cider from Flushing, MI. On the dry side (there’s also a medium-dry option), I liked Hogan’s Cider from Worcestershire, England. A new discovery was Julian Hard Cider from Julian, CA, a small Gold Rush town inland from Escondido and San Diego.

Its tart, dry Cherry Bomb ($11 for 22 oz. bottle) is a fascinating cider with a funky finish. There are Basque ciders, mead, wines, and beers, and bar food from chef Tony Carracci (Cha Cha Cha). For the time being there are no ciders on tap, but that is due to the intensive plumbing rebuild necessary to meet city requirements. Hopefully, there will be a way to provide draft ciders in the future.

Whiling away summer evenings in Upcider feels like traveling. I noticed the neighborhood’s Middle Eastern community gathering below for friendly banter, a refreshing alternative side of a street lined with raucous partiers and bar-hoppers.